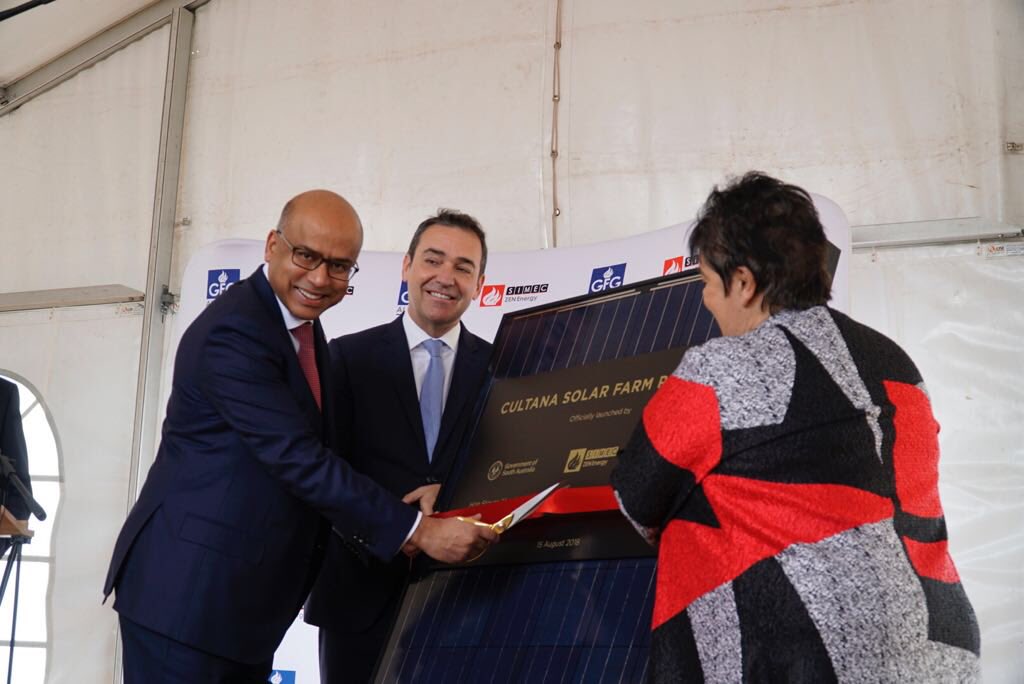 Amid the ongoing furore about the Federal Government’s proposed National Energy Guarantee (NEG), a 280MW solar PV project and a 52MWh battery project are both set to go ahead in South Australia, it has been announced today.

Earlier this week, the NEG moved onto a four-week consultation stage after the ruling Coalition signed off on it. The policy has been fiercely criticised by renewables industry groups, particularly for its potential to harm the development of the country’s pipeline of large-scale renewable energy projects and for its lack of ambition in gunning for just 26% renewables by 2030.

One of the chief proponents of the NEG, environment and energy minister Josh Frydenberg, made the disputed claim that the average household will be AU$550 (US$397) a year better off under the policy. Yesterday Frydenberg’s office said that the Federal Government, headed up by Malcolm Turnbull, will support the development of a 25MW/52MWh large-scale battery energy storage project through the Australian Renewable Energy Agency (ARENA).

The grid-connected project will be hooked up to Lake Bonney wind farm, a 278.5MW facility fully completed in 2009 after three stages of development. Developer Infigen said today it will invest in the project and has selected Tesla Powerpack technology for the battery energy storage system.

It will be connected to the National Electricity Market (NEM) which supplies businesses and households in eastern and southern Australia via its transmission lines and cables, at a substation, Mayurra. ARENA said that the battery system will provide frequency control ancillary services to the grid as well as flexible capacity.

ARENA will provide AU$5 million in funding, along with the South Australian government’s own Renewable Technology Fund, which is matching that amount of funding. The project will cost a total of AU$38 million.

Josh Frydenberg played up the Federal Government’s role in supporting the project, referring to a quote from Turnbull a while back that emphasised the importance of energy storage for Australia’s future energy mix. While South Australia has several large-scale battery systems already in operation including the 129MWh Hornsdale facility, this is the second such project in the state financially supported by Turnbull’s government, after a 30MW/8MWh battery on the Yorke Peninsula.

“Whether it is Snowy 2.0, Tasmania’s Battery of the Nation or large-scale batteries such as this one, the Turnbull Government is expanding, exploring and funding energy storage right across the country. Importantly, going forward, the National Energy Guarantee will require energy retailers to ensure they have sufficient reliable energy which could include storage, making certain there is always energy available to meet our needs,” Frydenberg said.

An Infigen statement to the Australian Stock Exchange (ASX) said the addition of battery energy storage capability to South Australia’s energy market “is consistent with the objectives of energy policy, including the proposed National Energy Guarantee”. The company also said the battery would enable Infigen to firm an additional 18MW of power dependent on customer load profiles.

In October 2017, PV Tech sister site Energy-Storage.news reported that UK-based businessman Sanjeev Gupta, the then newly-appointed chairman of ZEN Energy, had approved a plan for 1GW of dispatchable renewables for the commercial and industrial (C&I) sector in South Australia. The company’s SIMEC ZEN electricity retail division was also revealed in March to be developing a 140MWh battery in the state while the company’s other wins include an electricity supply contract for South Australian Government buildings.

This morning, SIMEC ZEN said that 1GW programme – worth around AU$1 billion – is now underway. South Australia State Premier Steven Marshall and Gupta inaugurated the 280MW Cultana Solar Project at a ceremony (pictured). Cultana will use 780,000 PV panels, 1,100 hectares in total and create 350 direct jobs during construction as well as 10 ongoing operations and maintenance (O&M) roles once it is completed.

Gupta’s group GFG Alliance which owns ZEN is active in territories across the globe and involved in developing a “single unified industrial strategy” with its activities and generates more than US$15 billion in revenues. Gupta has been quoted numerous times as saying that renewables are the present-day successor to coal, from an economic standpoint given the plunging cost of solar and now batteries and particularly in the context of South Australia. This morning, ZEN Energy issued a carefully worded statement from Sanjeev Gupta laying out his company’s strategy and vision going forward.

“All of these projects will not only improve reliability and greatly reduce the cost of electricity in our own operations, they will also provide competitive sources of power for other industrial and commercial users, while at the same time playing a key role in the market’s transition towards renewables.

“We have a strong conviction that traditional carbon‐intensive generation sources do not have a long‐term future as the predominant source of power in Australia and globally. We believe the world is undergoing a momentous transition to renewable power as the cost of renewables drops dramatically and quickly.

“It is, however, important that we acknowledge and also support the critical role that coal and other traditional fossil‐fuel‐based power must play in this transition.”