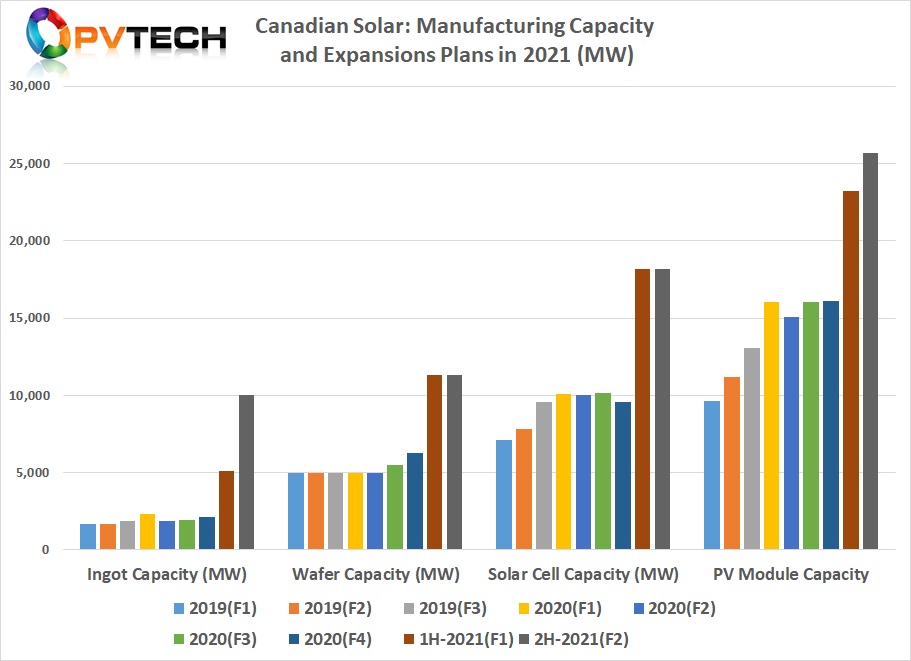 The SMSL member said in releasing third quarter financial results that it would expand in-house silicon ingot production by 7,900MW in 2021, its first major expansion since 2016. The company will increase nameplate capacity to 5,100MW in the first half of 2021, up from 2,100MW at the end of 2020.

In the second half of 2021, Canadian Solar will expand annual nameplate ingot nameplate capacity to 10,000MW.

The company did not disclose wafer sizes for the new expansion plans, but these would be expected to be either 182mm x 182mm, 210mm x 210mm, or a combination of both.

Although Canadian Solar would seem to have scrapped previous solar cell capacity expansions in 2020, these were actually very small at only 400MW, and plans for 2021 are much more ambitious.

With solar cell nameplate capacity static since the end of 2019 at 9,600MW, the company plans to add an additional 8,600MW of capacity in the first half of 2021. No further solar cell expansion plans were announced for the second half of the year.

In total, Canadian Solar expects to have total nameplate capacity of 18,200MW by the end of 2021. The company provided no information on the locations for these large solar cell capacity expansions.

By the end of next year, Canadian Solar is planning to have an annual module assembly nameplate capacity of 25,700MW. As with the other expansion plans, Canadian Solar did provide further details on where this expansion would take place in China or in what regions of the world were included in the figures.

However, recent (September 2020) Chinese media reports noted that Canadian Solar subsidiaries in Jiaxing City in northern Zhejiang province, China had signed a Phase II 5GW high-efficiency module assembly plant expansion that would start production in the first quarter of 2021. There has been no update or confirmation on these reports from Canadian Solar.