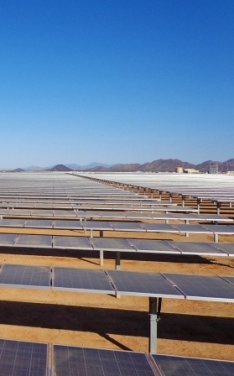 Capital Dynamics has sold a 99% stake in its Beacon solar portfolio in Kern County, California, to sustainable investment firm TortoiseEcofin and Israeli construction group Shikun & Binui for an undisclosed sum.

Under the deal, disclosed in late December 2020, TortoiseEcofin and S&B USA have each purchased 49.5% share of the Beacon portfolio, which comprises two utility-scale projects located in Kern County totalling 107.8MW capacity. Capital Dynamics acquired the projects during their development in 2016. Both provide energy for the Los Angeles Department of Water and Power through two 25-year power purchase agreements (PPAs).

Kathryn Carpenter, principal of Clean Energy Infrastructure at Capital Dynamics, said the Beacon solar project is now “well positioned” to provide a stable revenue stream to its new owners, one of which is a recent entrant to the US energy market.

The Beacon project is S&B’s first US first solar asset, according to Sharon Novak, CEO of Shikun & Binui America, and adds to a US energy portfolio of roughly 2GW. Novak said the company is “excited to have its first solar assets” in Kern County.

At the same time, Capital Dynamics has taken full ownership of the 175MW Arlington Valley Solar Energy II (AVSE II) in Arizona. The Swiss asset manager originally bought a 30% stake in the project in November as part of the acquisition of three PV projects from LS Power, which also includes 252MW in Imperial County, California, and 11MW in Dover, Delaware.

Capital Dynamics’ Clean Energy Infrastructure business (CEI) has now bought the remaining share of the Arizona project from investment group Apollo Global Management, bringing its solar capacity in the US to 3.1GW.

Tim Short, managing director of CEI said the purchase gives the group a “cleaner and simplified ownership position” of the asset, continuing its recent solar buying spree in the US.

The company has rapidly built on its solar portfolio in the US over the past year, starting with the purchase of a 400MW solar-plus-storage project in California from 8minute Solar Energy in January. In July, CEI then purchased a 353MW portfolio of North American solar projects from independent power product Coronal Energy, which comprised 16 projects in Arizona, California, Florida, Virginia, Tennessee and Ontario, Canada.

CEI also landed a deal with Nebraskan independent power producer Tenaska in August to develop 2GW of battery storage projects in California, a month after partnering with the same company to establish 4.8GW of solar in the Midwest and Southeast US.