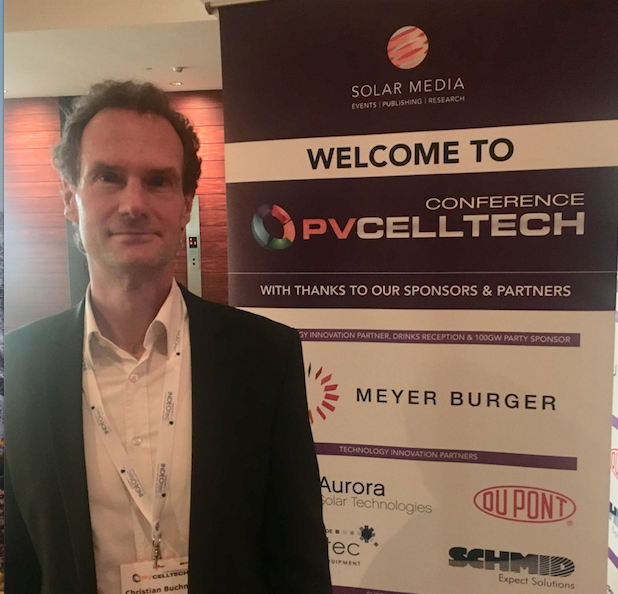 Advanced doping technologies for high efficiency n-type cell architectures was a key topic at PV CellTech 2018. After the conference, we caught up with Christian Buchner, Vice President of the Photovoltaics BU at leading PV equipment supplier SCHMID Group, to tap into some key takeaways.

What was your major learning from PV CellTech 2018?

Christian Buchner: It’s interesting to see the pace of these PERC developments, but also this interest in new technologies based on n-type.

The most important thing I will take back home is that if we don’t get into n-type manufacturing within the next 12 months then it is probably over to jump onto another train. The PERC train is already gone. If you want to compare, you have the steam train versus Shinkansen, the Japanese for high speed train – the Nozumi Super Express.

There’s a certain chance moment where you can jump from that steam train onto that fast train. That is possible, but if you miss this, you will be on the steam train and that opportunity is gone. That’s what I’ve taken from this show and also we are hoping we can contribute to the jump over to n-type.

We have seen the PERC train is also fast moving.

SCHMID has been actively engaged with almost every cell maker, in every country, since the industry moved into mass production status. Are you seeing signs today that cell manufacturing will move back to countries outside Asia, and what do these new countries need to do when entering the manufacturing segment?

Of course, we do see that movement. Many countries want to go green and implement renewable energy, but at the same time they want to implement jobs, specifically on the manufacturing side.

One very good example is Saudi Arabia – they even have the pressure now to find anything else in energy supply other than oil, because of trouble with oil prices and having to change their local energy supply which is so cheap. They are really interested in getting there and instead of buying from China, they would like to start local manufacturing to employ people and in particular women. That’s a very interesting thing we see, because there are lots of people thinking of module lines that are operated only by women, for example, and that’s quite a revolutionary approach for such a country. This is just one example, so each country has its own little story and all these countries are coming to us mainly for turnkey approaches.

We believe that the n-type cell architecture, which I presented at PV CellTech this year, is a gate opening architecture that is like a compromise between very high efficiency, as people expect, but also cost and easiness to move it into manufacturing. We believe as soon as that kicks off and finds its way into manufacturing then paste manufacturers will also jump on that train and will develop pastes that are at the same quality level as the PERC pastes are today. They will then enhance efficiency through better pastes like they did in the past with all the other cell concepts.

There are so many cell concepts which were presented not only today but also over the last years, and these concepts are not really making their way into manufacturing for a simple reason and that’s cost of manufacturing versus potential efficiency gain.

This is why we believe if you start with the very simple n-type architecture, but still with a potential of above 22%, that could be a way of entering, but if you have to wait until you target 23-24% then the PERC will be at the same level again. Timing is the key. It all depends on customers and early adopters or people who take the risk.

In China it’s very difficult to do that; people are very much used to following the mainstream and making that better. They are used to perfect production. If you look at PERC, it was ready for mass production by Schott in 2012, but it took four years until really it kick-started in the industry.