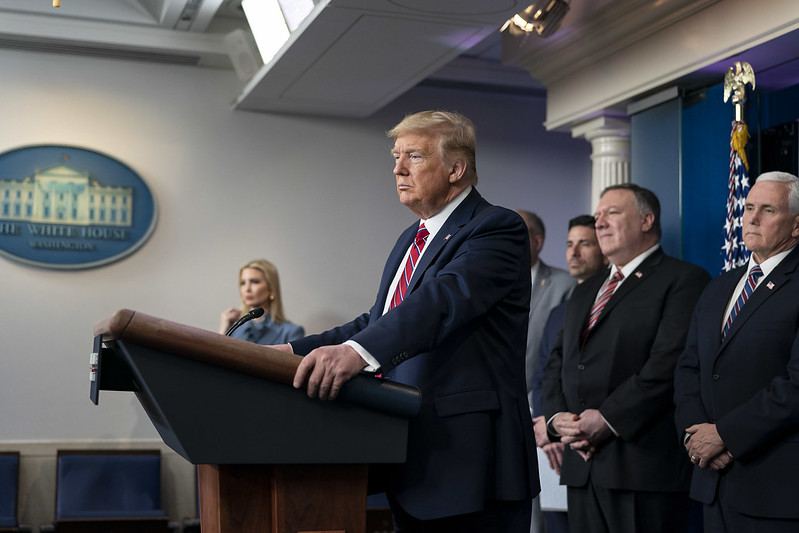 US green energy players grappling with impacts from the COVID-19 crisis have witnessed this month the adoption of a ban targeting electric equipment purchases involving “foreign adversaries”.

On 1 May, US president Donald Trump added his signature to an executive order outlawing the “acquisition, importation, transfer, or installation of any bulk-power system electric equipment” if it involves a foreign sponsor and is judged to be a threat to the US.

The document sought to justify the ban by citing security risks for the US bulk-power system, including cyber breaches. “Foreign adversaries are increasingly creating and exploiting vulnerabilities in the [US] bulk-power system, which provides the electricity that supports our national defense, vital emergency services, critical infrastructure, economy, and way of life,” the order said.

Lawyers approached by PV Tech were still working to interpret the scope of the vaguely-worded order (see below). In a prepared statement, law firm Norton Rose Fulbright said the “order leaves more questions than it answers,” from the energy sectors covered by the ban to which countries qualify as “foreign adversaries”.

The order, the law firm said, does “arguably” not apply to equipment for wind and solar projects but targets instead “generation facilities that are necessary for system reliability” – a policy goal Trump has linked with coal and nuclear plants in the past – and transmission grid equipment. Facilities used in the local distribution of electric energy are exempted from the ban, according to the order.

Regarding “foreign adversaries”, the order does not specifically mention any countries but China – Trump’s long-running trade opponent – seems to be the target, Norton Rose Fulbright said. Last June, Chinese group Huawei was reported as having shuttered its US solar inverter business after Congress lawmakers alleged the firm could use the devices to interfere with US power supply.

In Trump's own words: The order at the heart of the confusion

These are the provisions at the core of Donald Trump's new crackdown on power equipment purchases:

Section 1.  Prohibitions and Implementation.  (a)  The following actions are prohibited:  any acquisition, importation, transfer, or installation of any bulk-power system electric equipment (transaction) by any person, or with respect to any property, subject to the jurisdiction of the United States, where the transaction involves any property in which any foreign country or a national thereof has any interest (including through an interest in a contract for the provision of the equipment), where the transaction was initiated after the date of this order, and where the Secretary of Energy (Secretary), in coordination with the Director of the Office of Management and Budget and in consultation with the Secretary of Defense, the Secretary of Homeland Security, the Director of National Intelligence, and, as appropriate, the heads of other executive departments and agencies (agencies), has determined that:

(i)   the transaction involves bulk-power system electric equipment designed, developed, manufactured, or supplied, by persons owned by, controlled by, or subject to the jurisdiction or direction of a foreign adversary; and

(A)  poses an undue risk of sabotage to or subversion of the design, integrity, manufacturing, production, distribution, installation, operation, or maintenance of the bulk-power system in the United States;

(B)  poses an undue risk of catastrophic effects on the security or resiliency of United States critical infrastructure or the economy of the United States; or

See here to read the executive order in full

According to Norton Rose Fulbright, questions also remain around how the bulk-power purchase ban will be applied in practice.

The order specifies it will fall on the US Energy Secretary to – in consultation with his peers at Defense, Homeland Security and others – to establish whether a power equipment transaction meets at least one of the three red lines (see above) that would warrant a block. The wording seems to imply affected deals will have to be run past the US Department of Energy, the lawyers said.

According to Norton Rose Fulbright, the ban’s actual entry into force also remains unclear. The order says in one place that the order applies “where the transaction is initiated after the effective date of this order” but says in another than the ban will apply “notwithstanding any contract entered into or any license or permit granted prior to the date of this order,” the law firm noted.

The renewables industry has seen itself pushed to a series of standoffs with Trump’s administration since the president was sworn in in January 2017. Under his tenure, the country’s protectionist policies with solar have sparked a raft of high-profile WTO rows with China and India, sometimes ending in unfavourable rulings for Washington DC.

A key open front has been the Section 201 solar import tariffs Trump enacted in 2018. Despite court setbacks and the opposition of US downstream players represented by the SEIA, the administration recently made a fresh attempt to scrap bifacial’s initial Section 201 exemption. Axing the reprieve would require the lifting of an injunction ordered last year by the US Court of International Trade.

Some of the most recent controversies have revolved around the role played by renewables in US COVID-19 recovery policies. The industry first saw itself excluded from a bipartisan US$2 trillion relief package in late March, while solar operators were told in April that Section 201 tariffs would be preserved even as other importers were granted an anti-pandemic reprieve.

6 June 2023
Join us in Napa to unlock the key to reliable PV module supply to the U.S. market in 2023 & 2024. We'll also be gathering the main players in the US solar market for some wine tasting!
america, china, donald trump, north america, section 201, trade war, us, usa