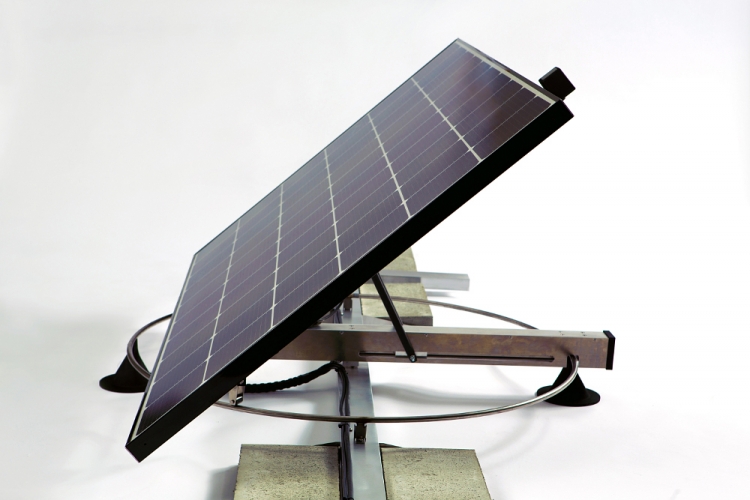 Known as PV Booster, this dual-axis solar tracker is the first of its kind for the C&I space. According to the company, its transformative technology yields 20% better solar rooftop economics than conventional fixed-tilt installations, giving rooftop PV projects an even greater return.

The PV Booster achieves the feat of being viable for a rooftop array by combating previously insurmountable issues pertaining to weight, size, mounting and wind. Edisun Microgrids claims that not only is the levelised cost of energy (LCOE) lowered by US$0.02/kWh with this technology, but energy production is increased by up to 30%.

Company CEO and founder of Idealab Bill Gross discussed with PV Tech how the PV Booster manages to achieve such feats.

Bill Gross: It basically all starts with the wind. The wind is your enemy in solar and the wind is especially your enemy in tracking. So the way people saw that on the ground, is that they mount the panels up in the air and they have a tracker that pivots the panels at the centre, and use a tonne of metal to resist the forces of the wind, so you can survive 160mph wind. No one had figured out a way to do that on the rooftop because the roof is not strong enough to do that. So we came up with a novel idea – so instead of sticking up in the wind and being strong enough to resist it, what about if you completely hide from the wind and then not have to fight it.

So what we do is hide from the wind effectively, and lower the load so much, that you then could put a tracker on the roof. That allows us to make a light-weight array that doesn't have to be bolted to the roof and won't put too much torque on the roof, which is what a typical tracker system would do.

This now opens up tracking to the commercial rooftop market.

PV Tech: How is PV Booster secured to the roof without bolting?

It is a grid structure, whereby they are all linked together – so they form one big, self-ballasted pod that the total drag or lift on the array just stays by its own weight. In some areas like California, you do need to have some anchoring for seismic reasons so it does not slide. So the perimeter you would pin down. Pinning down the perimeter is easy, as don't have to do the central part of the array, and there is still no torque load applied, so there is no lever-arm tearing at the roof, because it is so close in height.

How is the tracker installed cost-effectively on rooftops?

We are really only focused on large commercial rooftops, rooftops that are essentially flat; +/- ten degrees, +/- five degrees. The racking systems links together from tracker to tracker with a single bolt. It is pre-wired; so it goes together just about as fast as ten-degree tilt racks, which snap together and the panels snap into each tracker, and each tracker is separately powered and has a separate microprocessor in. We can buy a US$2 dollar microprocessor that we can put in each tracker that can do all the tracking controls; tracking the sun, the sensing, the dynamic adjustments, the back-tracking etc. and we can have in a distributed control system and that makes it easier to install because you don't have to have a lot of centralised components running around to every individual unit. You can have one wire running down which is basically power and signal going across.

It installs in about the same time as traditional racks, but it puts out about 31% more power because you are facing the sun all the time.

How does the product help with escalating time of day grid pricing?

If you take a look at the standard curve of how PV output comes during the day, it has a big boost at noon. Because we are facing the sun, our curve particularly more power in the late afternoon; staying flat until almost 5pm. That late afternoon power really helps when the peak power prices occur. The peak electricity time usually occurs between 2pm and 7pm; that's when the power company has the most demand in most areas. So our product helps that; it not only produces more energy, it produces more valuable energy and it lowers your demand charges, which C&I customers normally have. We help lower those more than a PV would; a PV system will help lower it a noon, but it won't do much for you at 3pm. We actually help on solar output by 31% but we help on the economics even more than that because of the value of that electricity being flat for longer portions of the day.

What sort of demand in the C&I space have you seen for such technology?

We've seen a lot. Even before the official announcement, we already had a 3MW pipeline in the US just from talking to a few people for feedback; they immediately wanted to buy the product. We hope to have a 100MW pipeline after the announcement and after Solar Power International ends.

Here's why there is demand: the ITC was extended, prices keep coming down on solar and subsidies are going away in some places, so you need to be more competitive to win the business. You need to compete with fossil fuels more closely to make the economics of a system work. Due to all of this, a lot of large commercial rooftops don't quite cancel out yet. With our product, there is a 20% boost in the economics. So let's say a project that was 10% on economics, with our 20% boost now becomes 10% pro economic; meaning a person could even make 10% more profit and still make the numbers work. If you look at large rooftops, the only reason that someone hasn't installed on them is because it didn't pay back fast enough.

Our 20% boost will now achieve that. We add 200 basis points to the IRR of a system, so we actually bring something from 8% to 10% IRR. The reason I think the demand is going to be so high – and in early discussions we already achieved very high demand – is because we see the same dynamic happening here as is happening on the ground. So five years ago on the ground it was relatively uncompetitive; prices were high, subsidies were high, and you could get away with a relatively sloppy system and still make the numbers work. As the subsidies go down, you've got to sharpen your pencil and make the system cost less. So what you saw was trackers coming in to try and boost the economics.

And now trackers companies have completely taken over. Everyone is going after the ground-mount market but they are just shaving pennies; we come into the rooftop market and we shave 50 cents. A typical rooftop system that maybe would go in for US$3 a watt, the total spread with a tracker might be reduced by a nickel but when we come in we save between 50-70 cents because of the 20% gain. So I think you are going to see trackers take off like crazy. We have a very novel design and a very particular design, and by being first to market, I think we can capture a big share.

6 June 2023
Join us in Napa to unlock the key to reliable PV module supply to the U.S. market in 2023 & 2024. We'll also be gathering the main players in the US solar market for some wine tasting!
commercial, edisun microgrids, spi, trackers, us, usa