EGing stated it would invest approximately RMB 1.0 billion (US$144 million) in a new 3GW ingot and wafering plant in in Hohhot, Inner Mongolia after acquiring a small local firm, Inner Mongolia Huayao Optoelectronics in 2019.

EGing’s existing ingot and wafering operations have been based in Changzhou, China but were said face multiple economic pressures, due to high electricity costs and outdated production equipment.

The new ingot and wafering plant would take two to three years to build and start operation, according to the company.

The company also announced plans to undertake a major revamp and upgrade of its existing solar cell and module assembly operations in Changzhou to support its efforts to return to a competitive position in the industry.

EGing stated it would introduce the industry's most advanced equipment and production lines at its Changzhou production base while taking an impairment charge of approximately RMB 220 million (US$31.7 million) on fixed assets.

The company plans new monocrystalline solar cell capacity of 1.5GW and 2.5GW of module assembly capacity. EGing did not provide capital expenditure or timelines for the major production revamp, yet this would include disposing of manufacturing equipment that had high energy and high material consumption.

Attention would also be focused on increasing R&D activities. According to PV Tech’s annual R&D spending report, Eging spent only around US$2.7 million on R&D in 2018, compared to a peak of US$21.3 million in 2015. 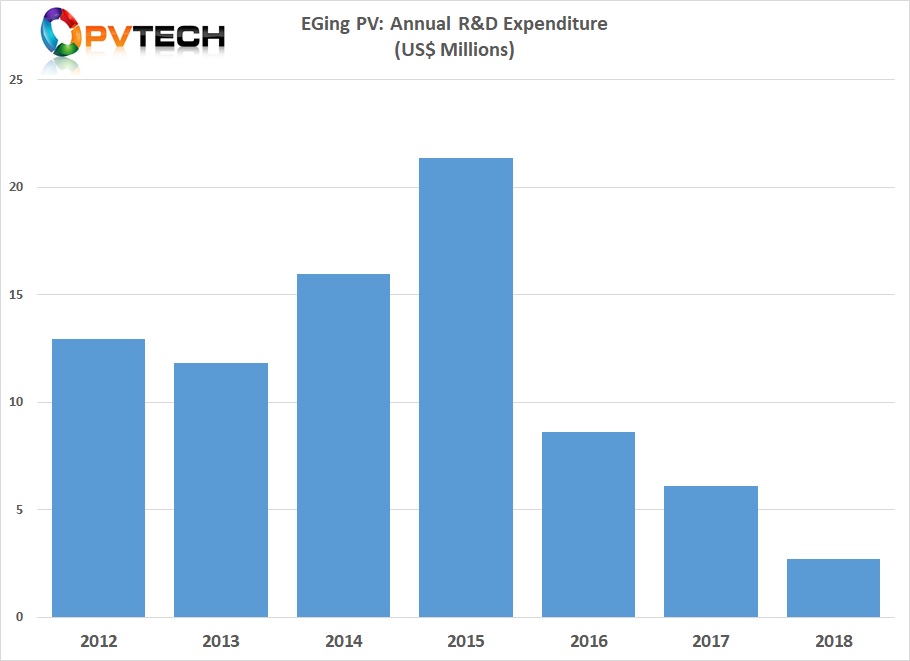 EGing reported that it expected to make a net loss of around RMB 210 million to RMB 270 million for the full-year 2019, primarily due to the impairment charges. Eging had reported a net profit of RMB 68.6 million in 2018.

The company said that product sales had increased by over 30% in 2019, compared to the previous year.