The significant increase in R&D spending was principally cited by GCL-Poly in its 2017 annual report for impacting overall gross profit, which declined 45.5% to RMB 1,263.6 million US$199.7 million. 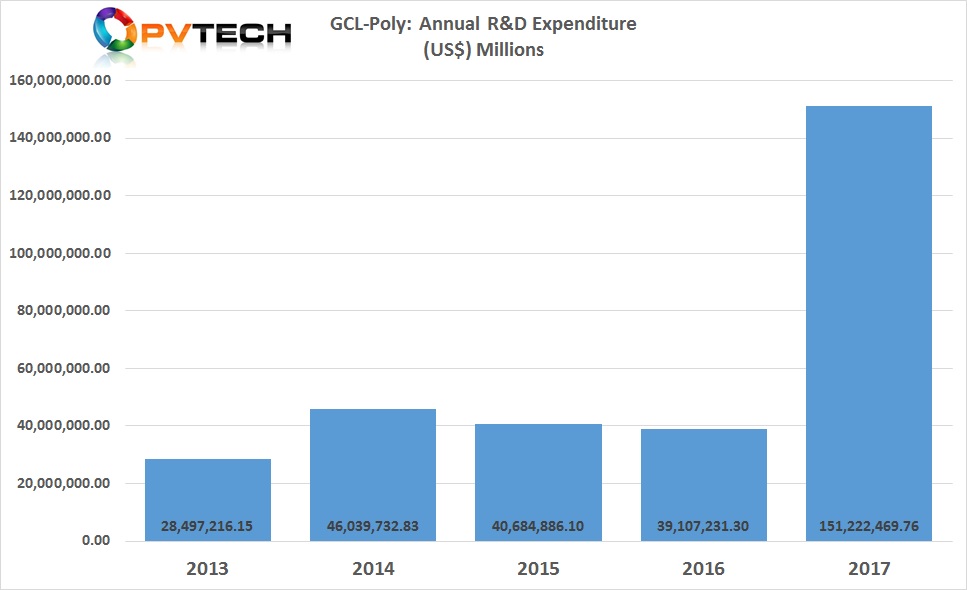 GCL-Poly noted that after the acquisition the polysilicon material technologies from SunEdison including FBR and the constant Czochralski mono-silicon (CCZ) technologies, the company applied the technologies on custom made, lower cost domestic made equipment, which will be used at new high-volume facilities under construction in Xinjiang, China.

As the largest multicrystalline ingot and wafer producer in the world, GCL-Poly highlighted that R&D and implementation activities in diamond wire saw cutting and ‘Black Silicon’ wafer texturing with the aim of completely migrating all production capacity to the two interrelated technologies had been the “biggest spotlights of GCL-Poly in 2017.”

GCL-Poly said that it had completed the upgrade of all wafer slicers to significantly reduce the wafer processing cost and that after the introduction of its first-generation ‘TS’ double-sided black silicon products it had launched the second-generation ‘TS+’ single-sided black silicon products. TS+ was said to have been developed to reduce “suede-surface” on the wafers, reducing texturing costs and facilitated widespread adoption of PERC cell technology on multicrystalline wafers.

The company was able to increase polysilicon output by around 7.9% due to these measures, which resulted in approximately 74,818MT of polysilicon production in 2017, while nameplate remained at 70,000MT.

Backing-up its increase in R&D spending, GCL-Poly highlighted that it had applied for a total of 133 patents in 2017, which included 49 ‘invention patents’, and obtained 120 patent licenses.

Cumulative patent applications stood as 1,054 with 637 patents granted of which 289 were said to be invention patents.