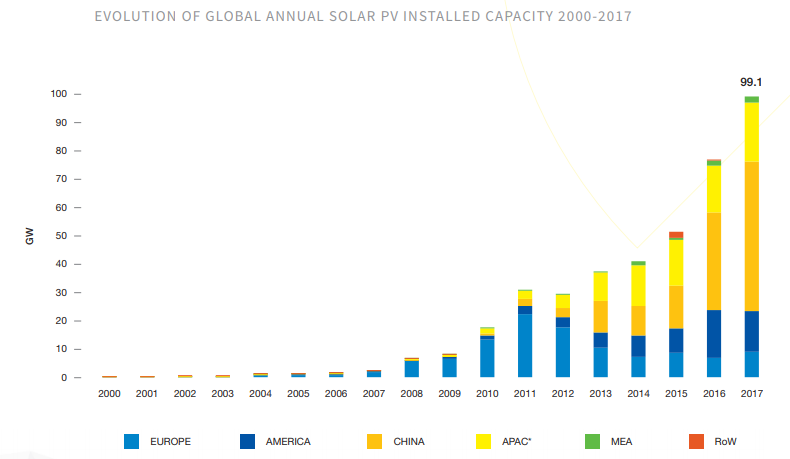 The world installed 99.1GW of solar in 2017 and is expected to breach the 100GW level this year, according to SolarPower Europe’s 'Global Market Outlook for Solar Power 2018-2022' report.

The association also projects growth to continue for the coming five years with the addition of another 621.7GW by 2022. This will start with a 3.5% market growth this year to 102.6GW, in spite of China’s recent major solar policy upheaval.

In 2017, for the first time, China installed more than half of the world's solar capacity in a single year with 53GW. However, as a result of this year’s major government cuts, it is expected to install just 39MW in 2018.

Countries that installed more than a gigawatt in one year are on the rise too:

Christian Westermeier, president of SolarPower Europe, said: “Solar is on a winning streak and on its way to become the dominant energy source of the 21st century”.

James Watson, CEO of SolarPower Europe, said: “More countries are banking on solar, this is great news for our technology. Now is the time to make sure we create the right regulatory frameworks for solar and storage, and all relevant technologies and remove barriers to solar growth. We are delighted that the European Union's three legislative institutions – the Commission, Parliament and Council – recently agreed on a 32% 2030 renewables target and empowered citizens, companies and communities with the right to produce, consume, store and sell power without being subject to punitive taxes or excessive red tape. That's the right direction – and what we've been working towards.

“Conversely, the solar import tariffs we see in Europe, the US and other countries are detrimental to the deployment of solar today and simply add unnecessary costs to consumers and society at large. These need to go as soon as possible.”

Last year, solar deployed nearly twice as much capacity as wind, with almost three times as much solar compared to gas and coal, and around 9 times more than nuclear additions. The technology is now also increasingly the lowest-cost power generation technology, with SolarPower Europe noting the record low bids seen in Saudi Arabia's 300MW Sakaka tender.