Gulf nations grappling with the realities of the clean energy transition 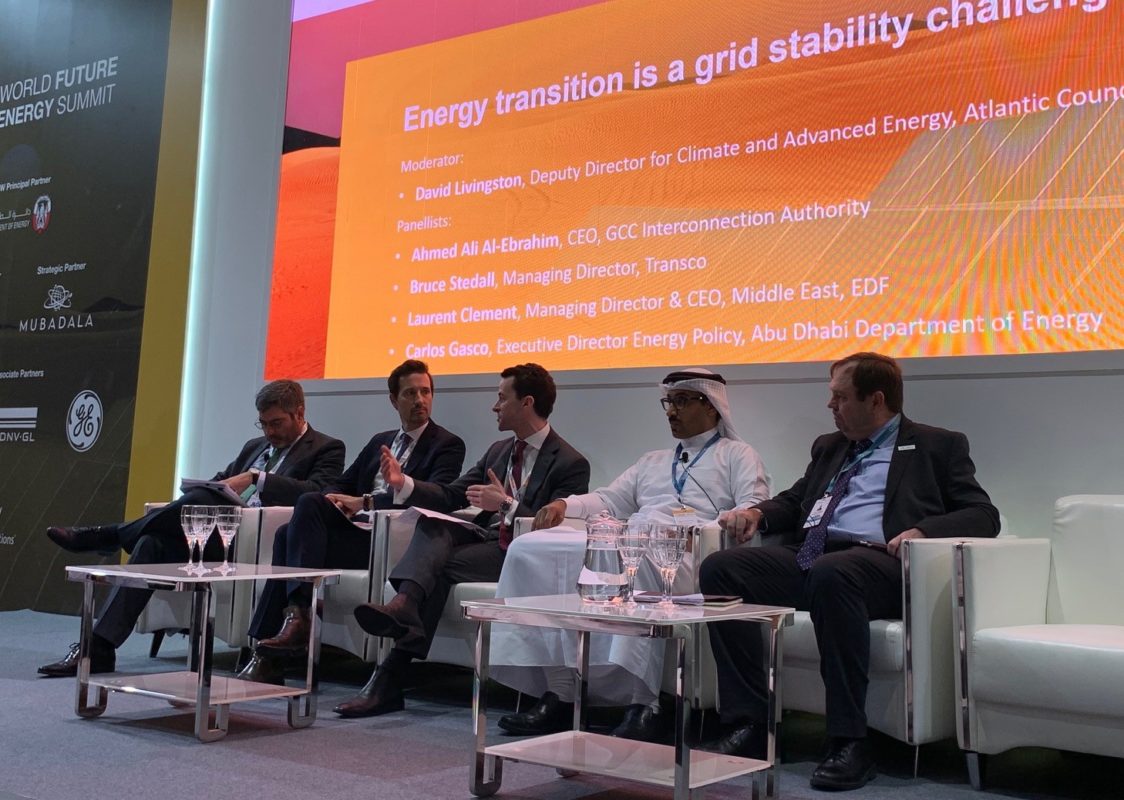 Countries in the Persian Gulf are coming to terms with the realities of greater proliferation of renewable energy, eyeing secondary reserve, flexible generation and grid management to cater for an expected explosion of solar capacity in the region.

This week saw the World Future Energy Summit take place in Abu Dhabi, bringing together a plethora of exhibitors and delegates from power companies the world over. Renewables, but specifically solar, were well represented, and took centre stage within numerous conference sessions held on the show floor.

While the UAE’s power system has been historically gas-fired, solar’s growing prominence is changing the face of the nation’s power mix. The “undeniable economics” of solar in the region, Bruce Stedall, managing director of transmission system operator Transco, said, meant the country was “very much headed down that route”. Stedall’s comments followed a previous session where it was said that solar was indeed gaining “maximum traction” in the UAE.

But that has caused other issues to arise, most notably the variable nature of solar’s generation against what can be volatile power demand. On a standard day in the summer, Abu Dhabi’s current solar portfolio provides around 6% of total power demand, however this can increase to as much as 16% in the winter when temperatures fall.

This volatility only stands to rise in tandem with solar’s rise. The 1.1GW Noor solar farm came on stream in Abu Dhabi in April 2019 and the emirate in late Q1/early Q2 2020 expects to select winning bidder from five who tendered for an additional 2GW solar farm, Al Dhafra, to come onstream no later than April 2022.

Emirates Water and Electricity Company (EWEC), Abu Dhabi’s main utility, expects as much as 9GW of baseload nuclear and solar power to come online by 2025.

The proliferation of solar is therefore expected to place a  “vital” importance on secondary reserve, Stedall said, with reserve capacity needed to pick up where solar may leave off. The aforementioned Noor plant was, however, providing Transco with a wealth of operational data that Stedall described as vital for the region as its own energy transition gathers pace.

This point was reinforced by Carlos Gasco, executive director for energy policy at the Abu Dhabi Department of Energy, who said the emirate witness a “fast-changing energy landscape” as renewable energy, and solar in particular, proliferates further.

While Abu Dhabi has already taken “massive steps forward”, Gasco said, going any further would rely on a more flexible grid, with secondary reserve and facilities capable of providing grid flexibility services as and when required. Greater forecasting capabilities would therefore be needed to more accurately predict when those services may be required.

Ahmed Ali Al-Ebrahim, chief executive at the GCC Interconnection Authority, warned that what was happening in the UAE was being echoed elsewhere, with other members of the Gulf Cooperation Council – which includes Saudi Arabia, Qatar, Oman, Kuwait and Bahrain – also undergoing transitions of their own featuring “aggressive targets for diversifying energy mixes”, Al-Ebrahim said.

The tipping point, he added, occurs when renewables proliferation tops 15 – 20%. At that point, a “different kind of grid” is needed, featuring management systems and dispatchable renewable power. As a result, battery storage facilities could become commonplace within tenders for new solar plants. The 2GW solar facility planned for Al Dhafra was tendered with an option for an adjacent storage facility with up to 300MWh of capacity.

Al-Ebrahim was, however, quick to add that for the UAE – and the GCC region in general – to deliver on its targets, the onus would very much sit with the states themselves and those responsible energy system management. “We cannot wait for things to catch up with us,” he concluded.