How many Chinese module suppliers can compete with JinkoSolar, outside China?

Since Chinese investments into major cell and module facilities started – more than 10 years ago – success ultimately has been driven by overseas market-share gains, above other technical or financial benchmarks that otherwise would be expected.

However, despite the efforts of well over 50 Chinese cell/module makers (where the cut-off is including those with >500MW of capacity), only 5-6 Chinese companies have actually succeeded in establishing global operations with brand-recognition, and can point to a successful overseas business plan.

However, only one of them has evolved into a company that, in several respects, operates as a non-Chinese company outside China – JinkoSolar.

This article looks at where JinkoSolar is placed in the PV industry today, from both a Chinese and global standpoint, and asks the question: can other Chinese companies do what JinkoSolar has done, and if so, can they do it before their Chinese supply pipeline disappears?

Many of the themes running throughout the narrative below are set to be featured in more detail, at the forthcoming PV ModuleTech 2018 event on 23-24 October 2018, in Penang, Malaysia, where the top 5-6 leading global module suppliers will be outlining their company’s module technology, quality, and reliability status.

Resuming overseas module supply much harder than before for Chinese companies

During the last major rush to export modules from China (driven mainly by European FiT demand before 2012), the requirement for a global presence was minimal. This was seen clearly at the time, with Chinese operations being trade-show sized replicas of domestic personnel, and where sales to intermediates (distributors, installers, EPCs) was largely sufficient.

The Asian companies then that sought to have a global presence (Yingli Green, Suntech, Sharp, Kyocera, etc.) ended up challenged by ASP declines and lack of product differentiation, and with global operations that were based largely on copying the Europe third-party sales approach, aside from the occasional frenzy into mainstream product placement activity (read Yingli Green and the 2014 FIFA world cup in Brazil, for example).

As trade barriers crept in (US and Europe), about 90% of the Chinese companies fell back to domestic module operations, in part due to the imminent market pull from local demand, but also arising from lack of desire/cash to have any Southeast Asia manufacturing.

In effect the period of 2012-2016 saw the second major phase of supply-channel consolidation (the first being the eradication of European and Japanese majors on the global stage), and left the only global module suppliers of note, with Chinese HQ operations, being JinkoSolar, JA Solar, Canadian Solar and Trina Solar. By the end of this period, Hanwha Q-CELLS had effectively become a South Korean-run operations, while having legacy Chinese manufacturing arising from the Solarfun days.

The other feature that differentiates them from the 100+ remaining cell/module makers in China, is related to sales/marketing outside China, and understanding the difference between a Chinese company doing business in China and outside. This remains the key factor determining success rates from the other Chinese companies overseas, regardless of the RMB-levels allocated to being on the global stage.

However, over the past 5-6 years, no Asian company (and very few globally) has been able to come close to the global module supply business strategy of JinkoSolar. In contrast to the other Asian companies that have got to global market-share leadership in the past, JinkoSolar has simply used this as a springboard to move to a different level, and into largely unchartered waters when it comes to a solar module company.

This is a question asked by many people globally in the past few years. Indeed, if the answer was simple and prescriptive, others would have done it long before now, or be rolling out 2-3 year plans to get there by 2020/2021.

Of course, one part is being in the right place at the right time (read entering the industry post margin-crippling long-term polysilicon contracts) and being able to juggle tactic and strategy effectively (flexible in-house, OEM, contract supply balancing). But if we were to make a stab at the main reasons for JinkoSolar’s success, it may simply come down to these three points:

• Creating non-Chinese operations (sales and marketing) that were geography, culture and sales-pipeline savvy, in exactly the correct global locations at any given time. What is being seen now with the company’s multi-GW pipeline of contractual deliveries is likely a direct result of this being in place. It is the closest thing yet to a Chinese company operating in a non-Chinese way, outside China.

• Putting in place a (real) technology roadmap with R&D spending and line upgrades, at the multi-GW level. This is one of the reasons previous market-leaders struggled, as many had effectively bankrupt themselves in getting to number-one with a me-too product, and had no what-next plan that should have been to be a market-leader as well as a technology-leader.

• Seeing the Chinese market (especially over the past 2-3 years) as low-priority, and being focused on being either number-one or number-two in all other major end-markets (regional or country-specific).
The first point above can’t be charted as a benchmarked metric (its way more subtle and strategy based), but the others can, so let’s have a look here to emphasize these two points. The graphs below illustrate these points clearly enough. 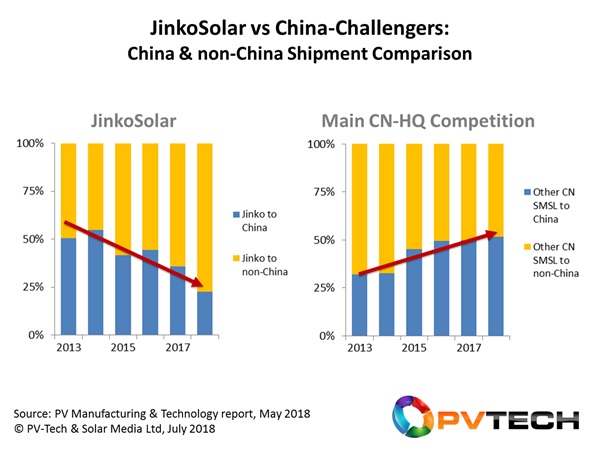 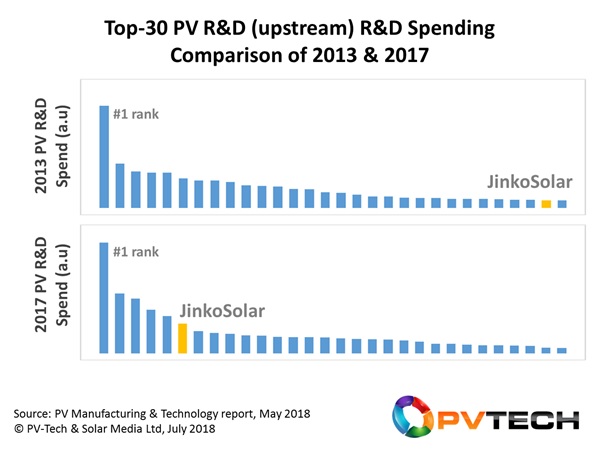 Ironically, the dilemma facing most of the Chinese based module suppliers today has arisen purely from the domestic China market. Almost all companies expanded capacities, production and module supply purely on the expectation of local supply being available.

Indeed, many had been doing this, without any overseas business, or at best having discontinued their focus on export revenue streams. Therefore, in the absence of local supply options, these companies have to export, or effectively cease to operate efficiently with adequate utilization rates.

This largely summarizes the situation many Chinese companies are faced with today: how do they quickly work out the markets to focus on overseas; how can they convince module buyers that they have product quality and reliability to be bankable?

For many Chinese module suppliers that were relying purely on domestic demand, the problem is even greater, in particular those companies that were supplying modules mostly to parent-owned EPCs, themselves undertaking build-out for the same parent entity. The requirement to have third-party factory auditing, module inspection and risk-assessment is clearly not at the level here, compared to shipping half way around the world to a non-Chinese investor.

These questions are going to form a key part of the forthcoming PV ModuleTech 2018 meeting in Penang in October. To allow for this, we have supplemented last year’s agenda with a new session where leading market analysts/developers from all key markets outside China will present on what utility demand will look like in these regions over the next few years and what this means for module suppliers.

Not just China module suppliers, others having to change tactics quickly

The shifting module supply landscape of 2019 is also having an impact on remaining module suppliers headquartered in Japan and South Korea, not to mention Taiwan and Vietnam/Thailand. For many of the module companies based in these countries, the challenge is not so much on meeting demand in their HQ-country (e.g. for markets such as Taiwan and South Korea that are government-created to support domestic sectors), but in working out which of the countries (outside of US and Europe) to focus on.

Perhaps across all these countries however, the what-next for Neo Solar Power (NSP) in Taiwan may be the most interesting to view in 2019. Assuming NSP emerges as the dominant partner in the newly-created consortium of NSP, Gintech and Solartech (with modules rebranded as URE), then NSP may finally make the cell-maker-to-module-supplier/developer transition, on the global stage.

Of course, NSP would face exactly the same issues in terms of creating global sales and marketing, and branding. The advantage NSP would have however is making this transition, having started from a technology (and cell) focused heritage. This is not dissimilar to the path taken by JA Solar and Hanwha Q-CELLS in recent years, and having technology credibility is never a bad starting point when changing operational focus.

Last year, at PV ModuleTech 2017, the audience heard from the most of the top-10 module suppliers to the PV industry, based purely on module supply volumes over the previous 12 months, including both within and outside China.

For PV ModuleTech 2018, the contributions from module suppliers are shifting mainly to the leading module suppliers to the non-China segment of the PV industry, including companies such as First Solar, SunPower, and selected others that are existing (or potential) global suppliers over the next 12-18 months (and the main Chinese companies expected to survive the imminent shakeout).

This select group of companies is likely to form the basis of many of the proposals that will be seen by utility-scale developers and EPCs over the next few years. Therefore, understanding who these companies are, what module technology types they have been supplying recently, what their module supply roadmaps look like, and how their panels have performed in the field so far (from third-party verification standpoints) is vital.

To get involved in PV ModuleTech 2018, on 23-24 October, in Penang, Malaysia, please follow the links at the event website here.