India as a nation is set to contribute more than any other country to the rise in global energy demand over the next 25 years to meet rising incomes and population, however, its energy demand per capita will still be 40% lower than the global average, according to a report from the International Energy Agency (IEA).

The 'India Energy Outlook 2015' document said the country’s energy demand has almost doubled since 2000, yet around 240 million people still lack access to electricity. IEA estimates India will require more than US$140 billion investment each year to meet its rising energy needs and improve energy efficiencies. It will also become by far the largest source of growth in worldwide coal and oil demand, which has major implications for world climate issues and India’s solar energy sector, as Bridge to India founder Tobias Engelmeier has previously discussed on PV Tech.

Critically, IEA said that behind China, India would become the second largest market for solar PV, forecasting that more than half of new generation capacity up to 2040 will come from alternative energy sources, with around 340GW of wind and solar capacity additions. These estimates are reinforced by India’s recently submitted INDC ahead of the COP21 Climate Conference in Paris next week.

India’s National Institute of Solar Energy estimates that India’s total solar potential is around 750GW, if using 3% of wasteland in each state.

India’s Ministry of New and Renewable Energy (MNRE) confirmed this week that total grid-connected PV installations have surpassed 4.57GW as of 31 October, meaning that 827MW were added in the first seven months of this financial year, with the year’s target at 1.4GW.

IEA said India’s targets of 100GW solar and 60GW wind by 2022 are “a powerful statement of intent”, but it expects the country will fall short in the proposed timeframe due to issues with land acquisition, remuneration, network expansion and financing means.

The report stated: “Even where states have expressed strong interest in the initiative to create solar parks, in practice it is proving difficult in many cases to identify and acquire suitable land.” 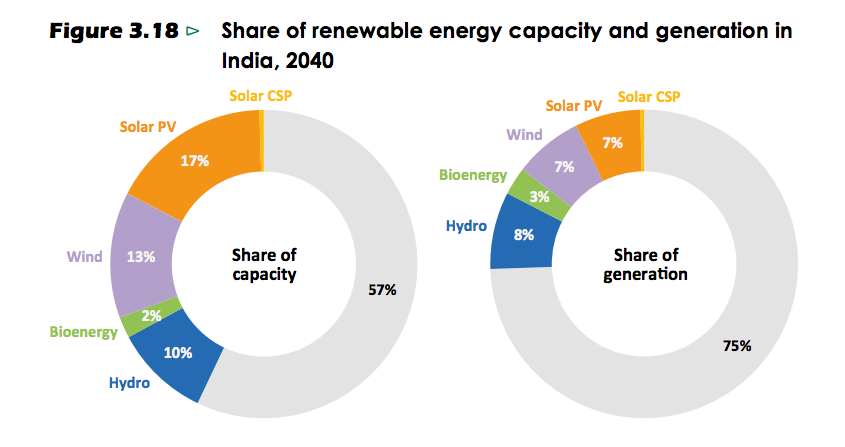 Despite MNRE recently admitting that rooftop solar has had a slow start, IEA said this sector could see “potentially very rapid growth”.

IEA executive director Fatih Birol added: “India’s energy transformation requires three things: investment, investment and investment. A lot is being done already to overhaul the energy regulatory system and get the incentives in place; this is vital, as India will need to call upon a wider range of investors and sources of finance than it has in the past.”

In any case, the poor financial health of India’s distribution companies remains a challenge, having created a cycle of uncertainty for generators, under-investment in infrastructure and poor quality of service in many regions. The Indian government’s recent UDAY package, however, seeks to alleviate the ballooning debt in the sector of US$65.4 billion.

Taking models on population growth, bringing India to the most populous country in the world, IEA also estimates that India will need to provide for nearly 600 million new electricity consumers by 2040. This comes with a further 315 million people becoming urbanized with the associated rise in fuel consumption and ownership of vehicles and appliances.

While prime minster Narendra Modi’s ‘Make in India’ initiative aims to turn India into a major manufacturing hub to meet these needs, it has been unclear how it will aid domestic manufacturers of solar PV equipment.

Last week a KPMG report forecast that solar prices in India could be substantially lower than coal by 2020.

However, this does not rule out the need for coal – IEA stated: “Our assessment is that India is unlikely to reach a situation in which the case for investment in new coal-fired capacity disappears.” 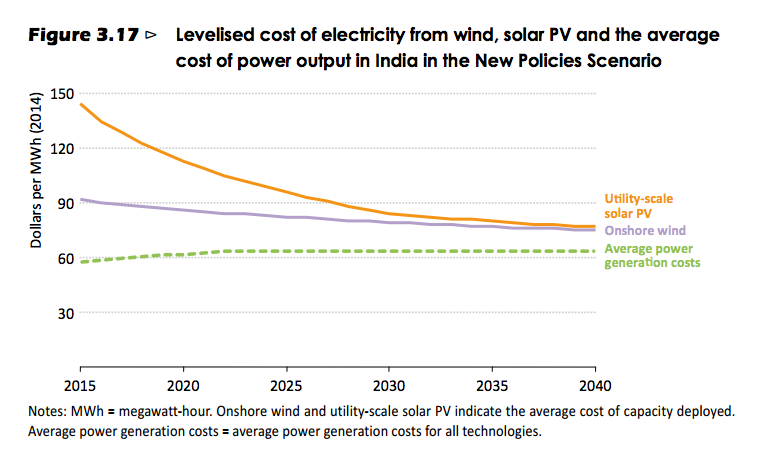