Key markets in 2016 will include the US, India and China, which are forecast to increase by 5.6GW, 2.7GW and 0.9GW respectively, accounting for 9.3GW of the 10GW global increase. 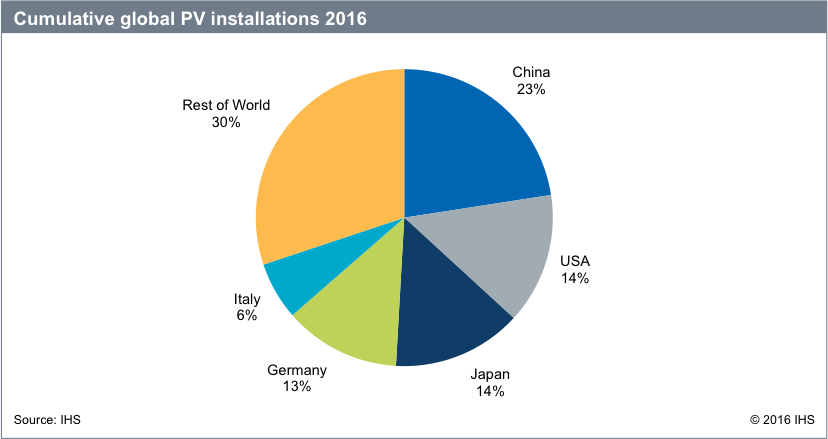 Due to the continued growth of major markets outside Europe, IHS said that it expected cumulative global PV installations to surpass 310GW by the end of 2016, with five countries (China, US, Japan, Germany and Italy) accounting for 70% of capacity.

IHS said it expected Germany to fall from second to fourth place in terms of total installed PV capacity as both the Japan and USA overtake it on the back of continued strong growth. Earlier this year Germany lost its number-one spot to China in the cumulative solar capacity leader board.

The small ASP decline would also support higher industry average gross margins, which could reach 22% in 2016.

“A continued stagnation of major European PV markets due to weaker financial incentives has caused PV additions in Europe to slow dramatically in recent years, but global demand remains strong,” said Josefin Berg, senior analyst of solar demand for IHS Technology. “The supply chain continues to benefit from a period of relatively stable pricing, and there could be a new wave of capacity expansions.”

IHS's estimate of 2015 installs is in line with previous figures from GTM Research in the US. However, its 2016 forecast is a 5GW higher than GTM's 2016 forecast of 64GW.

14 June 2022
Join us in Napa to unlock the key to reliable PV module supply to the U.S. market in 2022 & 2023. We'll also be gathering the main players in the US solar market for some wine tasting!
china, ihs, india, pv modules, us