In conversation with Li Zhenguo: “The world is changing, so is LONGi and so am I” 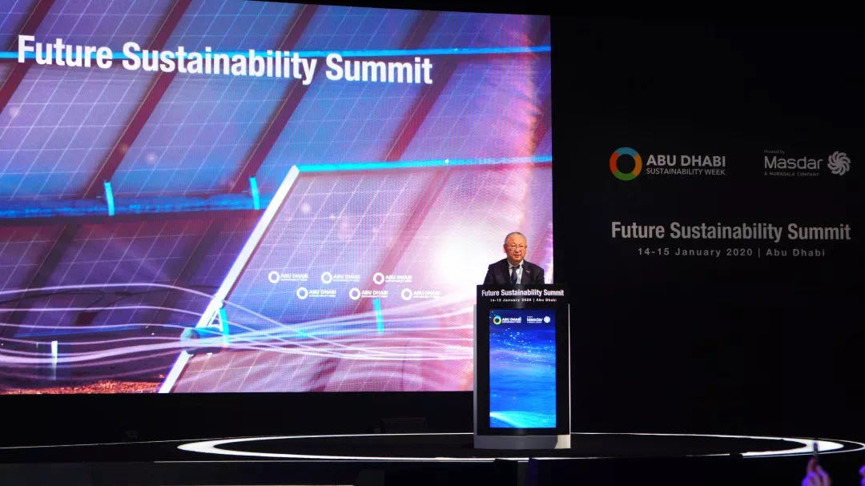 On the early morning of January 14 2020, Li Zhenguo, founder and president of LONGi, arrived in Abu Dhabi on a ‘red-eye’ flight. Despite the 10.5-hour journey from Shanghai and a four-hour time difference, Li started his day soon after.

He spent most of his time that day at the Abu Dhabi National Exhibition Centre attending the World Future Energy Summit (WFES), held in Abu Dhabi each January. Li had a long list of people to meet due to LONGi’s growing presence in the Middle East market, following years of development in the region.

Time is valuable. Li’s schedule was fully occupied, right up to his return journey to the airport. Some of his meetings could last for only 15 minutes. PV Tech sat down with Li Zhenguo for an exclusive interview on the fringes of WFES after a meeting with LONGi’s major accounts in the Middle East.

“The Middle East is a market that we entered a little late, because we needed to bring projects along to develop there at the beginning. In recent years, LONGi’s products have earned a greater reputation in the international market, drawing attention from the Middle East and Africa. We supplied a plant in Egypt with over 300MW of bifacial modules, through which the market could further understand the strengths of LONGi and our products. I believe we are going to make some major progress in the Middle East this year.”

Li continued, saying that the Middle East enjoys great solar resources, with solar energy developing rapidly also. LONGi will increase investment in this market as its next step. With a branch in Saudi Arabia already, the company is planning to set up a further office in Dubai to cover the whole of the MENA region.

In addition to the Middle East, LONGi already has branch offices in countries including the US, Japan, Germany and Australia, and investments in the “Belt and Road” countries like Malaysia, where the company has established overseas manufacturing capacity.

Li said that internationalization cannot be achieved in one go, with Chinese enterprises needing to develop gradually in this regard. LONGi has undergone such a process. Before 2016 almost 100% of LONGi’s modules were sold in China while, since the establishment of an overseas team that year, 10% of modules were sold overseas in 2017, 30% in 2018 and 60% in 2019. That percentage is expected to be even higher in 2020.

The capacity expansion plans launched by LONGi in 2019 provoked heated discussion in the industry.

Expansion at such a scale was questioned from many directions, but Li defends the move. “LONGi’s expansion was based on a series of facts. Firstly, we have faith in the future development of the solar market. Solar energy serves as the least expensive power source in many countries already. With the development of technology, the cost will be brought down even further. As a result, solar can become the most economical power source in the vast majority of locations around the world. We believe the market has potential for more than another 1000GW over the next 10 years.

“Secondly, we are confident about our technology. LONGi’s principle is always ‘no edge, no expansion’.  Our new facilities enjoy a world leading position in both technology and cost-saving.

“Lastly, we have enough capital to expand. Our cash flow is in good condition now. Our early-stage planning and current operations have been hugely effective, and we make a significant profit each year. These are the foundations for our expansion.”

While LONGi feels assured about its own expansion, some other cell and module producers have become anxious, worrying that their own or their customers’ market share will be eroded.

Addressing this concern, Li has a story to tell. “When LONGi just started to develop its overseas module business in 2016, I ran into a vice president of CitiBank, and he posed the same question. I picked up my iPhone and told him it contained numerous Samsung components, including its screen. And Apple and Samsung were the top two competitors in the mobile phone industry at that time.

“So we believe as long as you bring real value to your customers, such competition and cooperation can co-exist. This is the start point of our strategy.”

Addressing the industry concerns, Li emphasized that, despite LONGi’s entry into the downstream sector, its partners and competitors can always have confidence in its wafers, and LONGi never increases wafer prices due to any imbalance between supply and demand.

“Our major target is to reduce the cost and thus the price of mono wafers through continuous technology innovations, making the solar sector more competitive when competing with traditional energy.”

Profits from LONGi’s mono wafers have become the envy of the industry in the last two years.

“Wafers may seem rather profitable today, but if we didn’t make up our mind to produce modules for the downstream in 2015, or persistently drive the development of mono technology and its market acceptance, then today’s market volume of mono and the associated profits can never be possible.

“As the leader of an enterprise, one must have foresight and be both resolved and decisive at critical moments.”

Li continued: “The gross margin for modules is low at the moment, but this sector will also become centralized over the next few years. In 2018, the top 10 module manufacturers in the world took up 50% of the market. We believe, in less than three years, the top five module suppliers may take up 70% of the market. Module manufacturing can become a very profitable business by then.”

According to statistics, during the period between 2005 and 2010, the industry’s total growth in cell and module production was measured by hundreds of megawatts, and then by gigawatts for that of 2011-2015, and now by several gigawatts for 2016-2020.

Taking the example of module production, it can be seen in PV Tech’s World Top 10 Module Supplier list for 2018 that the top five module manufacturers are growing larger and larger, the industry seeing a higher concentration. The other five companies on the list, despite their ranking, are of an inferior level in terms of shipment scale to those in the top five. 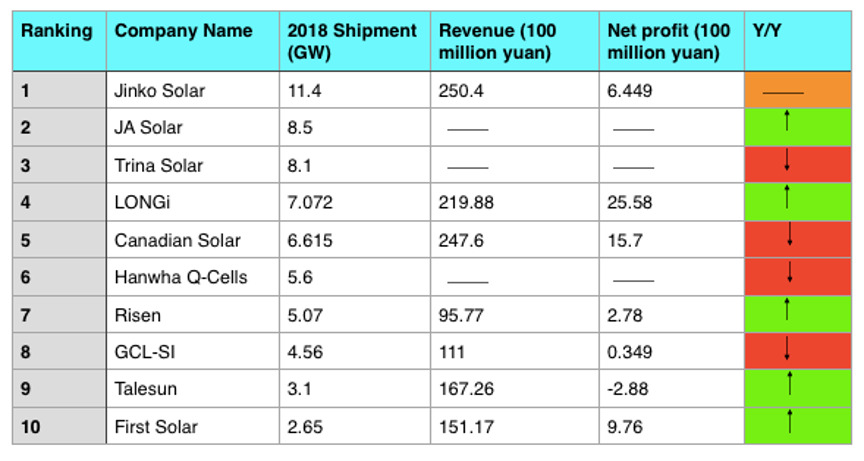 “The focus of the industry is changing, but the core is always to build up your leading technology, products and cost management capability. Only in this way can you hope to hold a position of long-term strength,” Li continued.

Li also thinks the module business is becoming harder than before. “When you look back over the past three to five years, you find module production is the only link on the PV industry chain that has a rising investment cost per watt. Investment for every 10,000 tons of polysilicon is dropping year by year, so is the investment for every gigawatt of ingots, wafers, and cells.

“As a contrast, the investment for every gigawatt of modules was RMB 60 million three or four years ago, and now the number is over 100 million. This has increased the threshhold for the  module business and its technology is also developing fast.”

“Times are changing, faster than we’d like sometimes. A company’s strategy needs constant adjustment and evolution in accordance with the industry’s development.

“LONGi’s positioning at first was as the world’s largest mono wafer supplier, then the largest mono module supplier. Last year, LONGi announced its new positioning — the enabler and leader of global energy transformation.

“As a response, the industry considers LONGi as ‘changed’. LONGi didn’t make any big change. Our commitment to developing and promoting solar energy has always been the same. It’s just the more you are involved in an industry, the deeper and better you understand its requirements, and what you do conforms more closely with those requirements.

“If, in the past, LONGi’s focus was pushing forward the development of high-efficiency mono through technological innovation, then the LONGi of today no longer limits itself to living inside the industry, but rather has a vision of promoting solar power and clean energy to the world.

“Ten years ago, I thought it was a life-time dream for us to reduce the cost of solar energy to a level the same as coal power through our efforts. I didn’t expect it to come true so fast. Our next goal is to make more people aware of this and accelerate solar’s adoption.” 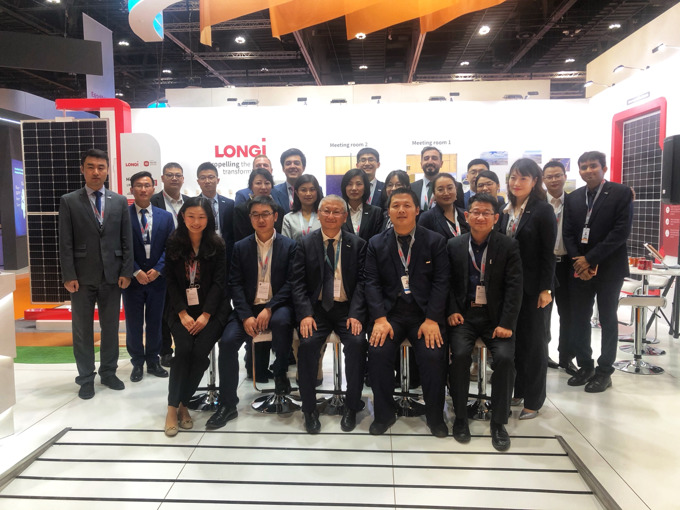 Li and his team hold a positive view towards future energy prospects. They believe in the realization of a 100% clean energy structure and a negative-carbon development mode. Solar energy can solve the energy efficiency issue and power problems, leading to the reversal of ecological damage.

Li concluded our conversation with an appeal. “We hope more people become aware of this issue and accelerate the progress of clean energy. If action is not taken in time, some damage can never be reversed, like the extinction of species, or our next generation could be condemned to living with polluted air.”