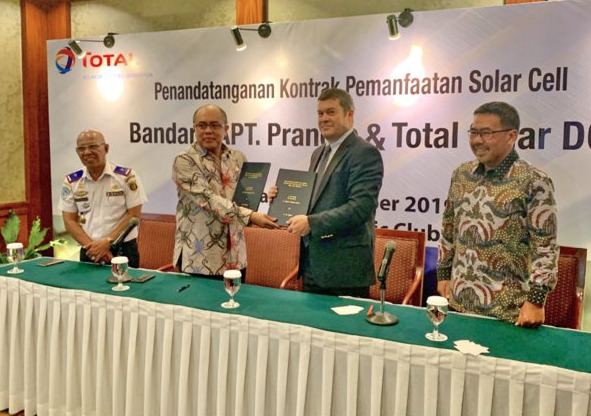 A subsidiary of French power giant Total has signed a contract to supply rooftop PV to an airport in East Kalimantan province, which will be Indonesia's first airport to go solar and will cater for Indonesia's future capital in Borneo.

APT Pranoto Airport in Samarinda, which started operating in May 2018, is billed to become one of the country's major airports after the government decided to move the capital city in 2024 from Jakarta to Kutai in East Kalimantan. To ease the pressure on Jakarta, which is under threat from rising sea levels through climate change, the government said in August that it wants to build a smart, green city on state land near the existing urban zones of Samarinda and Balikpapan on the less densely populated island of Borneo.

The airport's executives are following a government push for more green initiatives and sustainability, hence the focus on solar.

Total Solar Distributed Generation (DG) Southeast Asia will provide the 600kWp solar system with 1,800 modules to the airport. It is meant to generate 755MWh of electricity every year, covering around 20% of the airport's power needs as well as around 54 Indonesian 4-bedroom houses. The installation will take around six months to build.

“Total Solar DG is proud to be able to support the government in their sustainability commitments and especially on this prestigious project to relocate the capital city. This project will drive down costs and carbon footprint in a safe and sustainable way,” said Gavin Adda, CEO of Total Solar DG SEA.

Total Solar DG Southeast Asia specialises in commercial and industrial (C&I) customers and has a portfolio of over 500MW of projects in development and operation since 2018.

Over the summer it was announced that Indonesia would be one of the beneficiary countries of the Climate Investor One programme, which has raised US$850 million financing for renewables in Africa, Asia and Latin America.