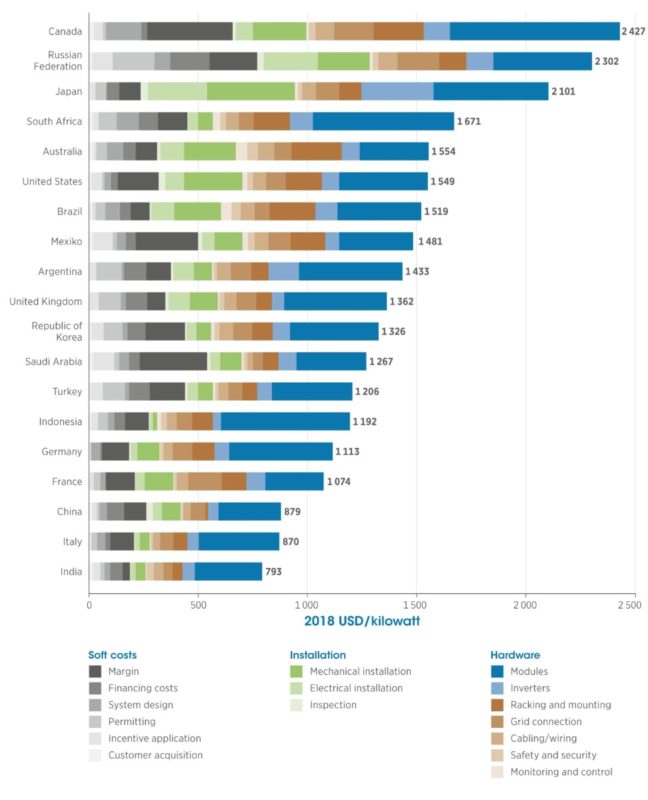 Cheaper modules are setting the scene for grid parity to become the norm for the global solar industry as early as next year, according to the International Renewable Energy Agency (IRENA).

The body reviewed thousands of renewable projects and PPAs and found 83% of the utility-scale PV pipeline commissioned for 2020 will boast prices lower than the cheapest fossil-fuel alternatives.

At US$0.048/kWh, the utility-scale PV costs now expected next year – down from IRENA’s initial predictions of US$0.055/kWh – will see the industry outcompete 700GW of operational coal-fired plants worldwide.

The findings, IRENA said, show solar PV can together with wind and CSP become the “competitive backbone” of the energy transition. The global community has now received a “clear signal” that low-cost clean energy is a scalable solution, director-general Francesco La Camara said.

IRENA’s review charted the major cost declines across key PV markets all the way to 2018, a year when the industry represented 55% (94GW of 171GW) of all renewable installations.

The greatest cost drops between 2010 and 2018 were witnessed with Indian (80%) and Italian (78%) utility-scale projects. This helped the Asian and European state top G20 competitiveness charts last year, with costs of US$793/kW and US$870/kW.

By far the most expensive G20 utility-scale PV hosts were, however, Canada (US$2,427/kW), the Russian Federation (US$2,302/kW) and Japan (US$2,101/kW). All three faced higher module, installation and margin costs than was the norm elsewhere.

Cheaper modules were, IRENA found, a core driver of across-the-board PV cost reductions. Prices of crystalline silicon modules, in particular, declined much faster between December 2017 and December 2018 (26-32%) than they had in the earlier 12 months (1-7%).

The findings around cost-competitive manufacturers come after many from China and elsewhere showcased their products at this year’s Intersolar. Some, Jetion Solar included, are positioning themselves to secure a slice of a fast-reviving European PV market.