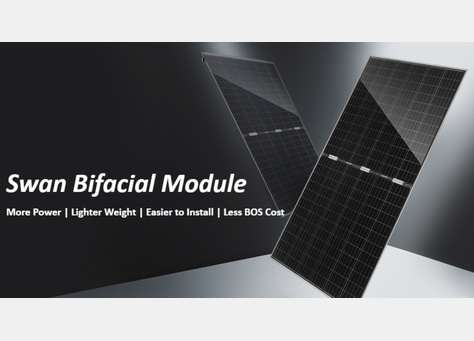 JinkoSolar's Swan module (pictured), however the module manufacturer his not disclosed which panels in particular will be used in this project. Image: JinkoSolar.

Jinko will supply 60.9MW of bifacial modules for the project, which is located in the Antofagasta Region of Chile.

More than 154,000 modules will be used to provide the solar PV portion of the project which will also see 90MW of onshore wind turbines deployed.

While Jinko has not specified which panel in particular will be used, the manufacturer’s general manager for Latin America Alberto Cutler explained it was the first project in Latin America to use Jinko’s bifacial modules with transparent backsheets.

“The PV plant equipped with our bifacial modules has already generated one of the lowest LCOE and is able to compete with traditional energy sources. We are expecting to sell more bifacial modules in the coming few months across the region,” he said.

The project is expected to complete early next year.

PV Tech publisher Solar Media is hosting its inaugural Energy Storage Latin America event later this week, bringing together key industry stakeholders as the region looks to accelerate its adoption of energy storage. More details on the event, which is now being hosted digitally, can be found here.