Renewable energy demand continues to grow globally, with solar leading alternative energy technologies. According to GTM Research, growth for solar in 2016 was expected to be about 21% in 2016, translating to 66GW of solar power output globally; see Figure 1. More recent updates from GTM show actual growth in 2016 to 74GW and projections of 109GW by 2021. Innovation impacting the longevity and durability of PV solar systems is paramount to a sustainable solar energy future. 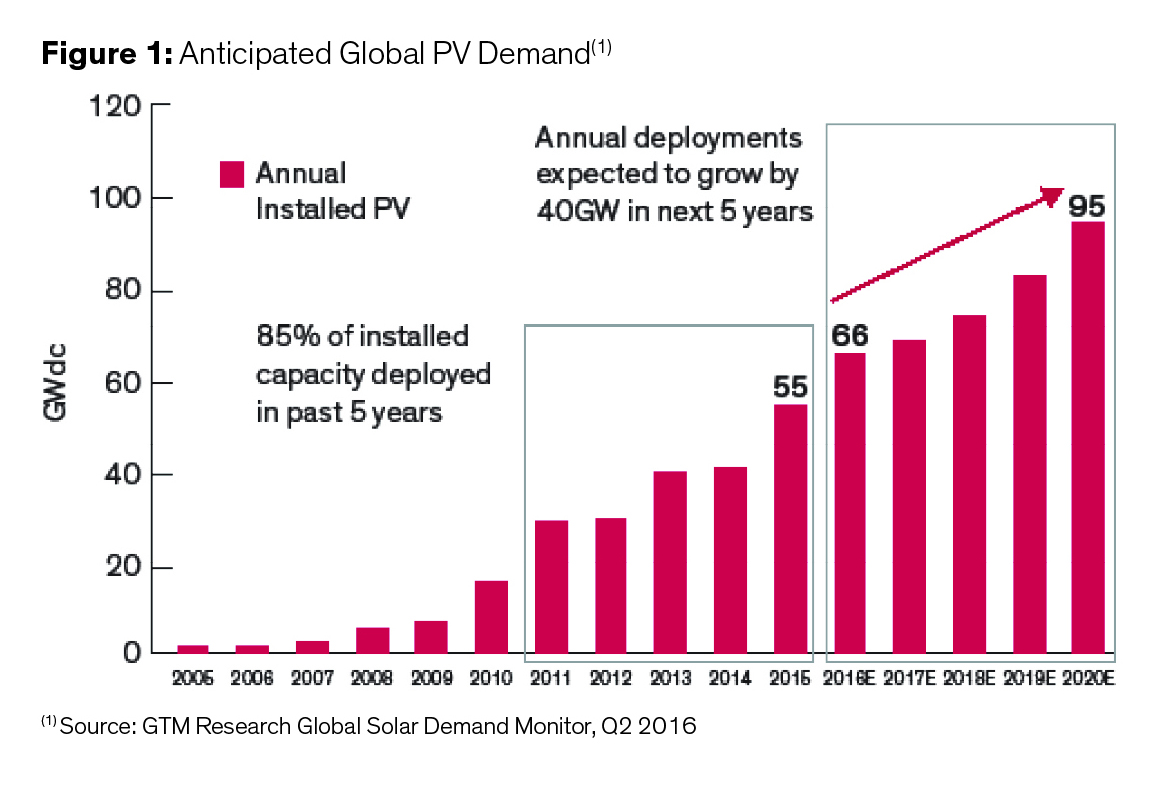 Ethylene vinyl acetate (EVA) has long been used in PV encapsulant films, offering good light transmittance, elasticity and adhesion properties. However, its moisture, heat and UV-aging resistance, along with yellowing that can cause lower power outputs, are a challenge. 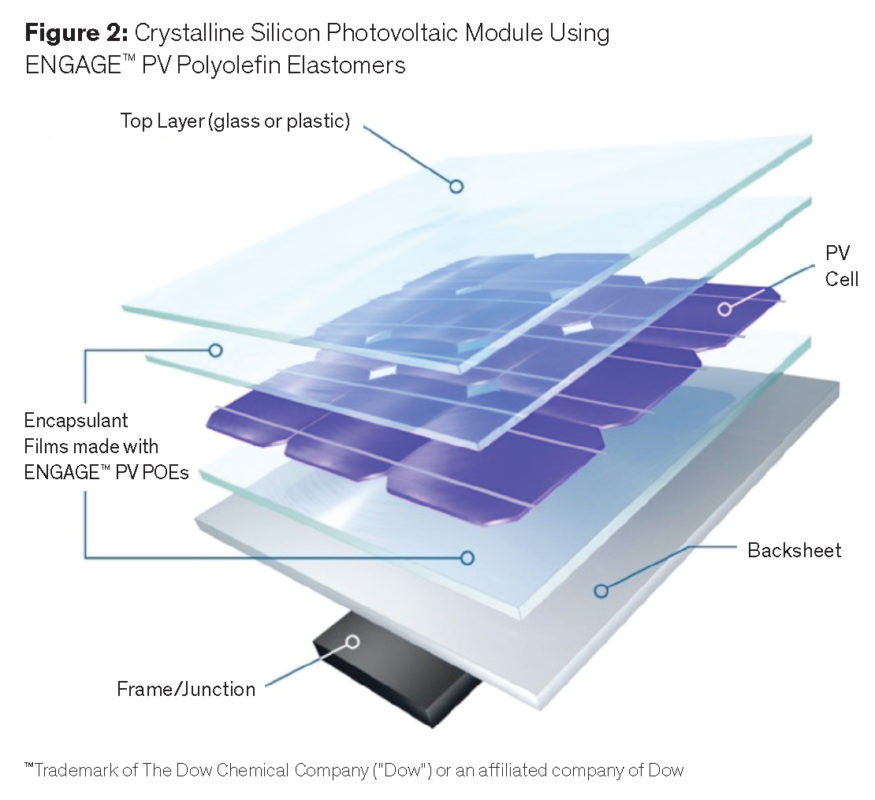 Modules made with POE-based encapsulant films outperform those made with EVA in these critical areas (Table 1): 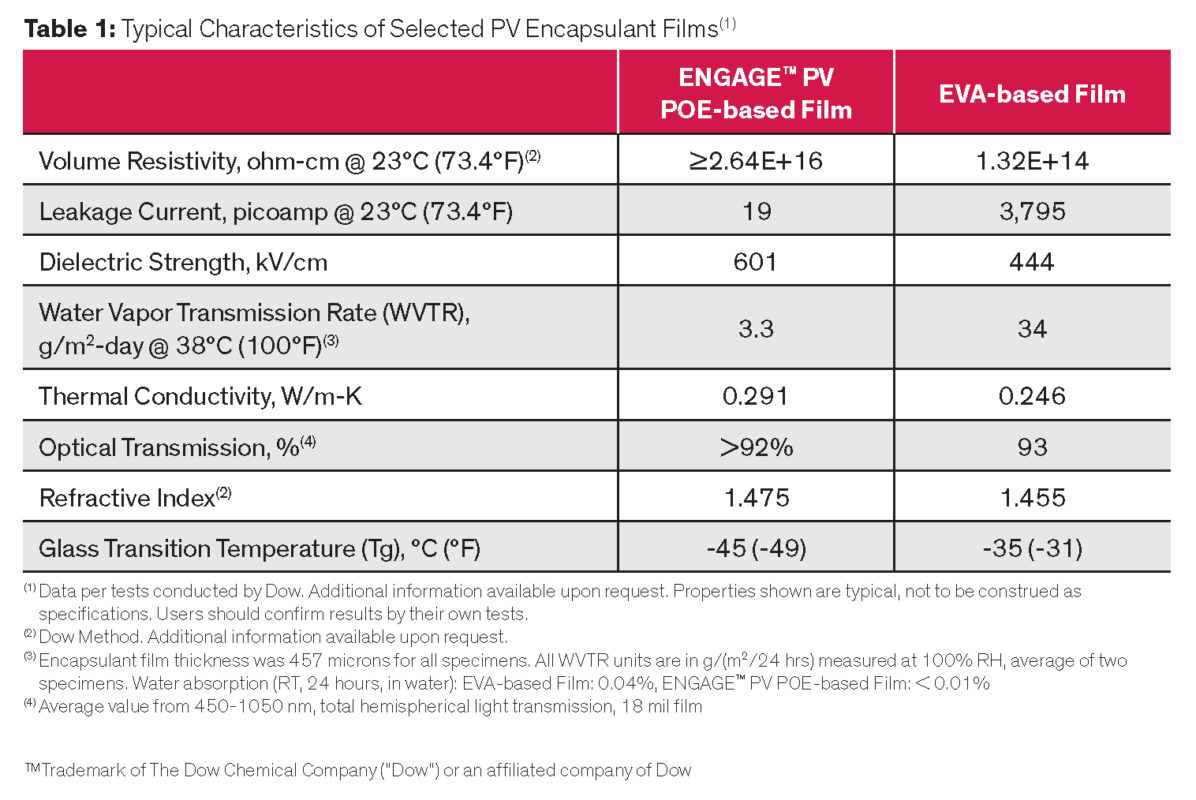 Other testing of POE materials versus EVA compared:

Dow worked with Florida Solar Energy Center to compare EVA- and POE-based film modules over a three-year period. The EVA-based film modules lost three times more total power output (based on a combination of degradation rate plus PID for total degradation rate) during the study than those modules made with POE-based film. Calculations based on this study along with further testing, translate to an estimated 54.5% retained power output after a 25-year service life for EVA-based modules, versus nearly 92% retained power output for POE over the same time period (Figure 3). 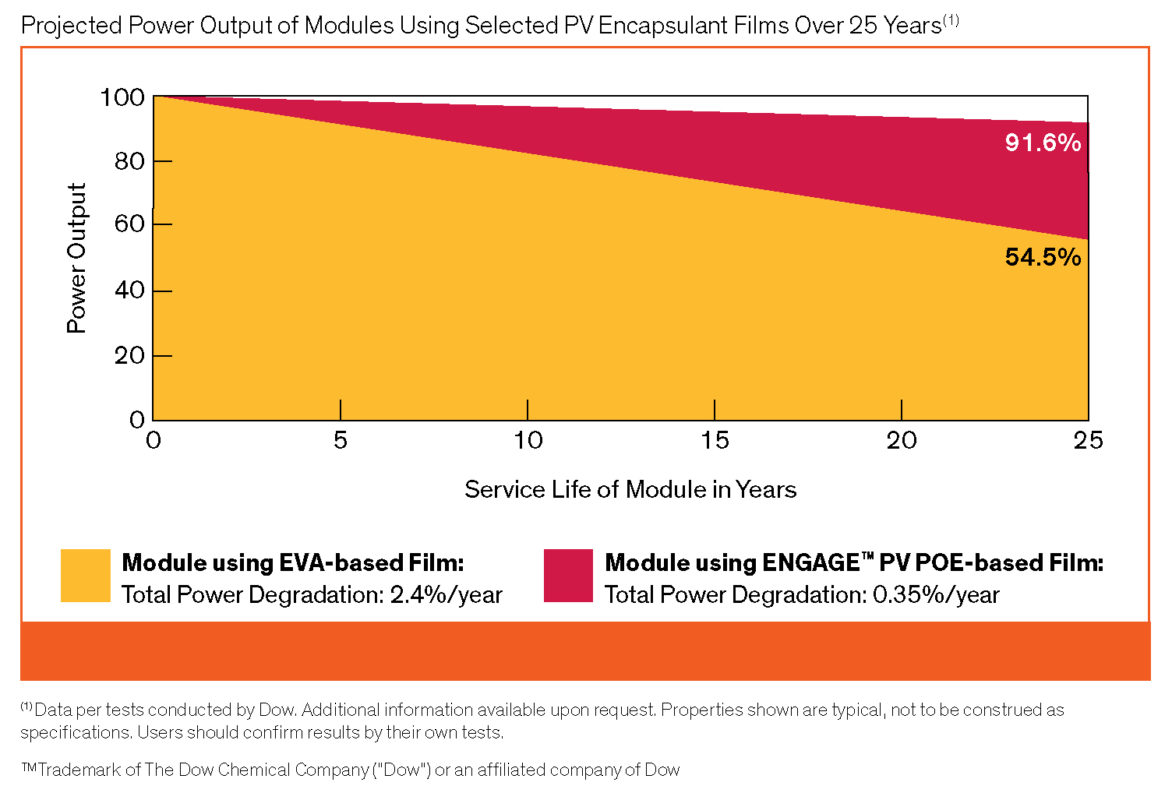 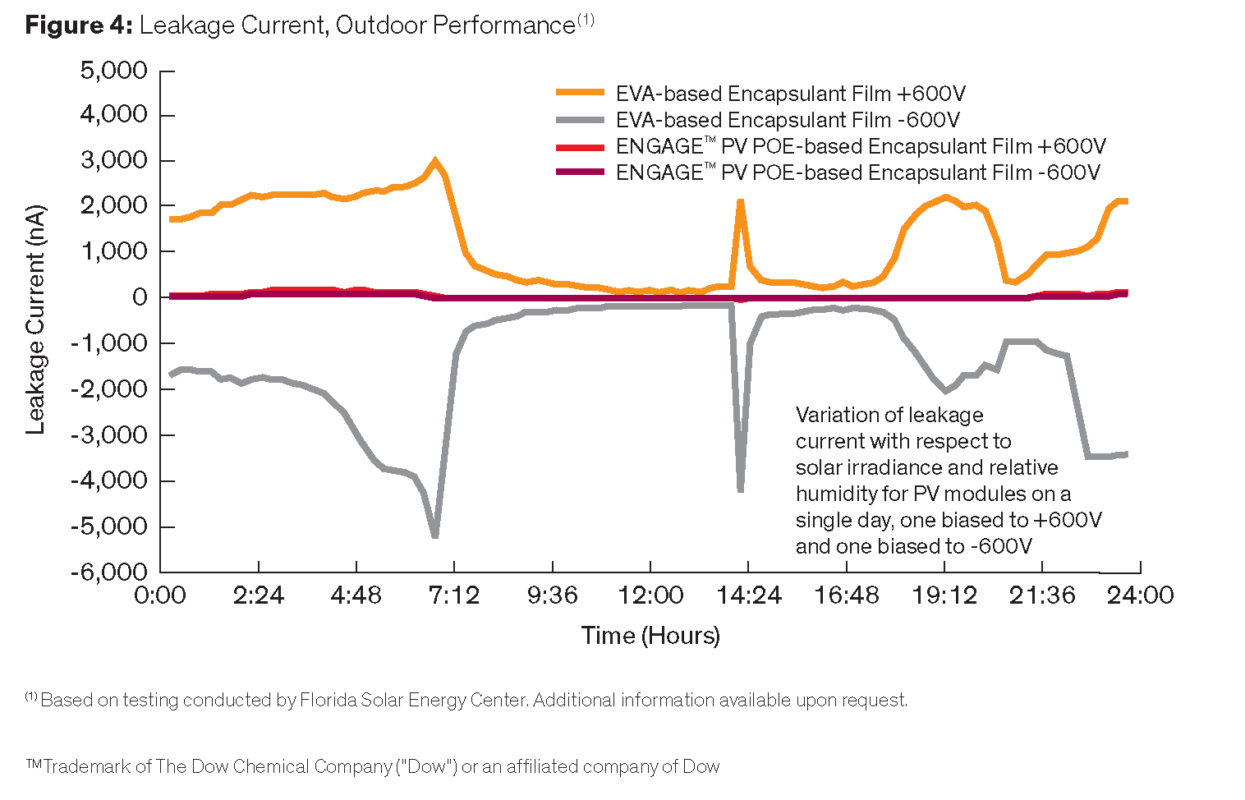 PV modules’ ability to resist potential induced degradation (PID) from high voltage stress results in improved power output performance and long-term reliability. Dow and the Fraunhofer Center for Silicon Photovoltaics tested both POE- and EVA-based modules. All were exposed to three test cycles of 50% RH at -1000V at 50⁰C over two days. Run 1 was followed by a recovery period of ten days in a dark room at room temperature. Figure 5 shows representative findings of PID. EVA-based film exhibited significant and rapid power loss versus POE-based film. 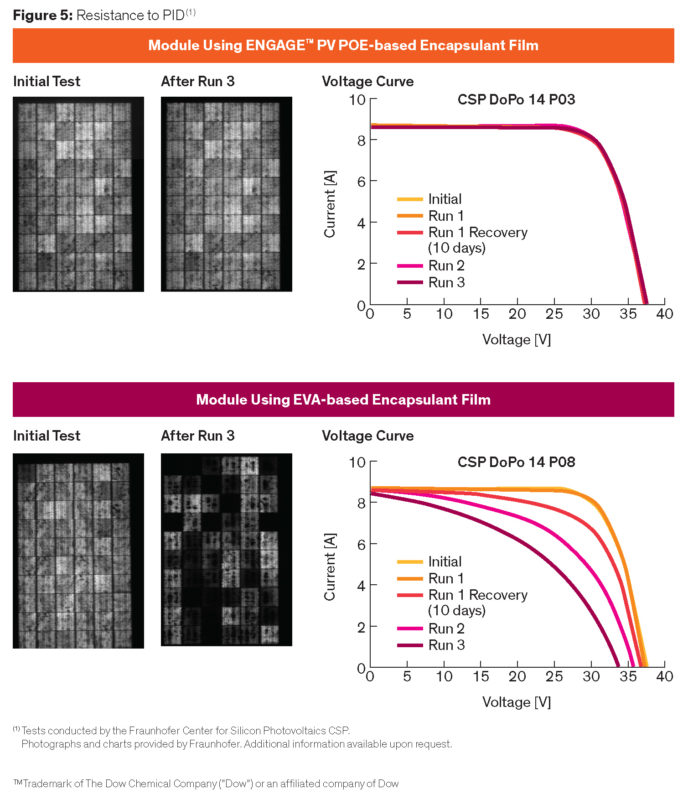 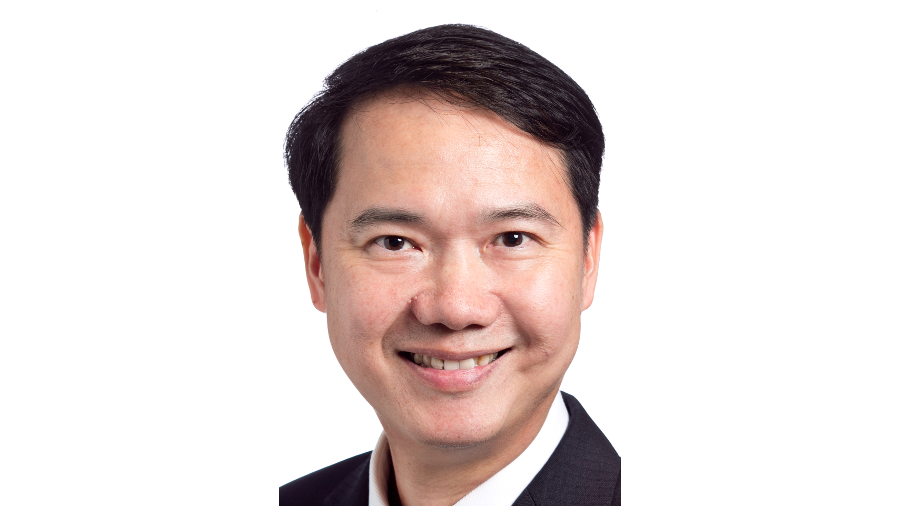 Andrew began his career with h-UCC Singapore in 1996. In 2001, he joined h-Dow/UCC Singapore. Since then, he’s held various positions such as Chemist, Account Manager, Technical Service & Development (TS&D) from Specialty Polymers to Specialty Chemicals businesses within Dow at its Midland, Michigan; Shanghai, PRC and Singapore locations. In 2011, Andrew returned to Dow Singapore to assume the Regional Marketing Manager role for Dow Elastomers. He was recently named Marketing Manager, Asia Pacific for Dow Elastomers, Electrical & Telecommunications. Andrew holds a Degree in Analytical Chemistry from The National University of Singapore and Postgraduate Diploma in Marketing from The Chartered Institute of Marketing, UK. 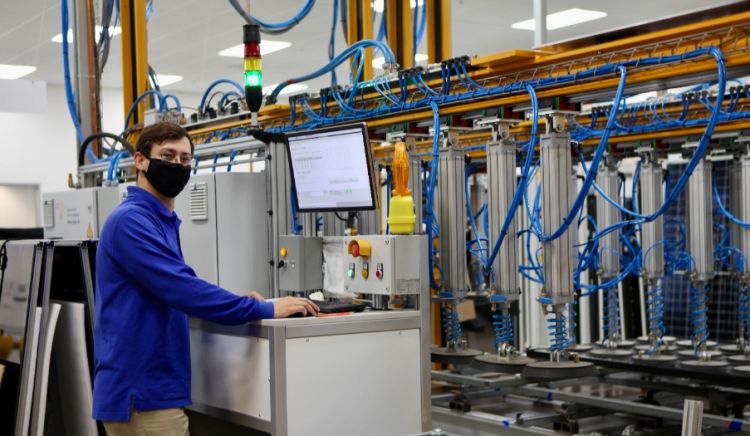 November 10, 2020
Recently, PV-Tech featured an extended interview with Cherif Kedir, the President and CEO at the Renewable Energy Test Center (RETC), based in Fremont, California, regarding new trends in module reliability and performance testing. 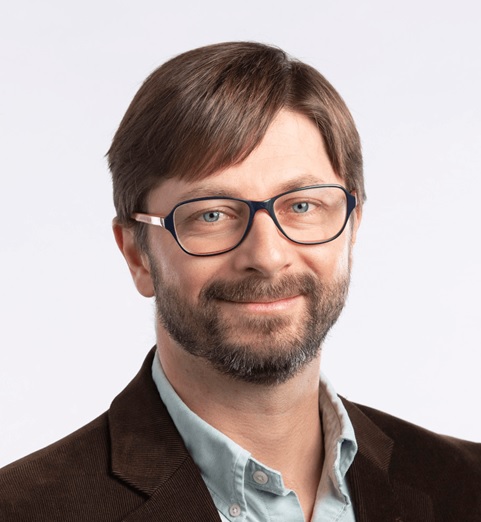 October 26, 2020
Ahead of the forthcoming PV CellTech 2020 Online event, on 27-29 October 2020, PV-Tech’s head of research and Chair of PV CellTech, Dr. Finlay Colville took the time to catch up with Jenya Meydbray, CEO at PV Evolution Labs (PVEL), about why PV cell and module technology remains a critical issue for site performance and reliability globally.