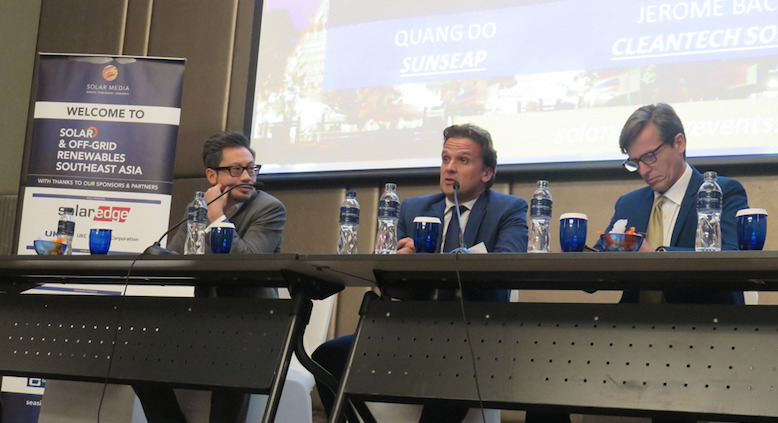 Renewable energy power purchase agreements (PPA) driven by solar are set to take a significant chunk of the market in Southeast Asia over the next few years, according to panellists at the Solar and Off-Grid Renewables Southeast Asia (SORSEA) conference in Bangkok.

Franck Constant, CEO of renewables and storage investment platform Constant Energy, said that the US market saw 30% of its renewable energy off-taker agreements come out as corporate PPAs last year and he expects Southeast Asia to reach a similar penetration in the next three-to-five years.

He added: “Our view is this trend is going to move very quickly to Asia.”

This will particularly be the case in the more developed markets of the ASEAN region and in those where regulation is conducive to its growth.

Constant said that while being able to offer carbon emissions reductions to customers, the key driver of renewable energy corporate PPAs remains being able to offer significant savings, because, ultimately, the corporate won't sign the PPA unless its Chief Financial Officer can see there will be significant savings for his business in the long run.

Constant also noted that the likes of global heavyweight organisations Amazon, Google and Microsoft all pushing for clean energy has been a significant boon for the segment.

Jerome Baco, COO of Singapore-headquartered rooftop PV corporate PPA specialist CleanTech Solar also said the market has witnessed a recent surge in demand from the leading multinational corporations (MNCs) committing themselves to be 100% powered by renewables by certain deadlines.

He noted that the RE100, organised by the Climate Group, now had 120 members made up all of the world’s most famous brands, who were all under pressure to reach the clean energy goals they have announced publicly and are therefore driving demand even further.

For this reason, Baco's firm now sees new opportunities in both multi-site and multi-country RfPs, which also helps to sweep aside complaints from lenders about rooftop solar lacking scalability.

Baco added: “These kind of clients – the ones that we dream about because the credit ratings are very low – these are the best companies in the world.”

Noting a change in overall attitudes, Quang Do, director of Singapore-based clean energy solutions provider Sunseap, said: “Over last year, the biggest thing we have seen is – even here in Thailand – in Southeast Asia the idea of 'Green'. Two years ago that’s not something you would talk about in terms of motivating potential clients to sign with you.”

He also noted that many MNC’s supply chain partners were based in Southeast Asia, which will further drive momentum.

Looking worldwide, Constant said that the early movers in power deregulation, such as Chile, had also been the best for corporate PPAs. Mining operations in Mexico and Chile had also drawn activity, as well as parts of Northern Europe, while Asia is now seen as the next “low hanging fruit”.

While in some markets of Southeast Asia, one can offer savings by having an LCOE well below the industrial or commercial tariff, regulation can be a barrier.

Using a graph from Solar Energy Research Institute of Singapore (SERIS), Constant pointed out Singapore, Thailand and Malaysia as attractive markets. While Cambodia, the Philippines and Indonesia all had strong economic arguments for these PPAs, they each face regulatory challenges or uncertainty at present.

Baco said: “From Philippines we understood from the regulator that they are working on a new regulation for solar rooftop corporate PPAs, so we see the market as being a little bit on hold for now.”

Constant also highlighted that it is not permitted to be a majority foreign investor in the Philippines, which is another constraint. He also said there are problems with getting licenses in Indonesia.

Even though Thailand is itself facing a regulatory challenge on exporting power (see box below), Constant forecast that the country would see 300-500MW of corporate PPAs next year, which will continue for several years.

Baco highlighted Malaysia and Thailand as having strong dynamism and demand, although he noted that another part of Asia, India, was drawing the most activity at present.

When there are issues around net metering and power supply in these country’s Baco said the industry would really benefit from the big brand customers using their power to influence the country regulators instead of just relying on the renewable energy firms to persuade governments.

Right now in Thailand, despite some movement in the corporate PPA segment, developers still cannot export power from their solar systems to the grid. Only the C&I off-taker can use the power. This means that if a factory is down over the weekend, any power produced is wasted.

Florian Bennhold, managing director of Symbior Solar also said this creates added costs for the developer, who has to install extra equipment to stop the power from flowing out.

Constant said: “It's an extra cost for the economy as a whole, because that power produced during Sunday is not used at all by industry nor the developer nor the utility so its going to waste.”

The panellists called for the utilities to take the excess power for free at the very least, which would not harm them in any way.

Bennhold did note, however, that the friction with the utilities is understandable given that the utilities are worried about losing revenue form their best customers.

Local reports, announced earlier this year, said that Thailand was set to relax these restrictions in Q4 this year and finally let residential and C&I solar generation be sold back to the grid.

Constant also discussed the potential of solar-plus-storage in Southeast Asia at the SORSEA conference.