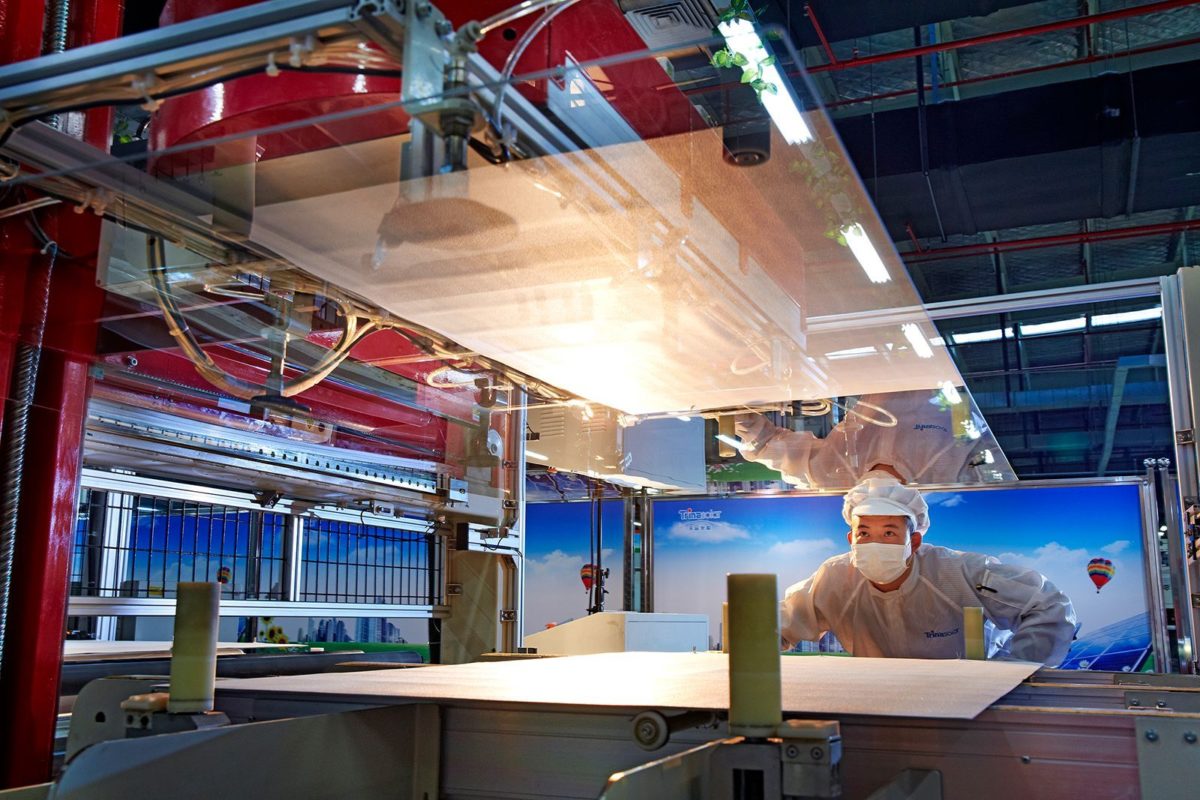 PV capital expenditure (capex) in 2018, covering investments into ingot, wafer, cell and module capacity, will grow by almost 25% compared to 2017, passing through the US$10 billion mark, returning to levels last seen back in 2010 and 2011 when investments in turn-key thin-film fabs were a key contributor.

2018 capex will represent a 7-year high for the industry, and 4 times the amount of PV capex seen back in 2013, when the industry passed through the trough of the previous downturn cycle, and will be the fifth consecutive year of spending growth.

Capex this year is being driven mainly by Chinese-based investments across the entire c-Si value-chain, with multi-GW (5-20 GW) expansion plans well underway from leading PV manufacturers.

With the exception of First Solar (and its thin-film capex), the rest of the PV industry outside China is largely in the noise, often playing with loose change to sustain loss-making operations.

If you thought Chinese investments were calling the shots in the PV industry until now, just wait until the end of 2018!

The figure below shows PV capex over a 10 year period going back to 2007. This clearly reveals that the industry is well into its second major upturn in capex, with peak annual investment levels edging towards the $10 billion figure that characterized the halcyon days of 2010 and 2011, when equipment suppliers would routinely tout having billion-dollar-backlogs. 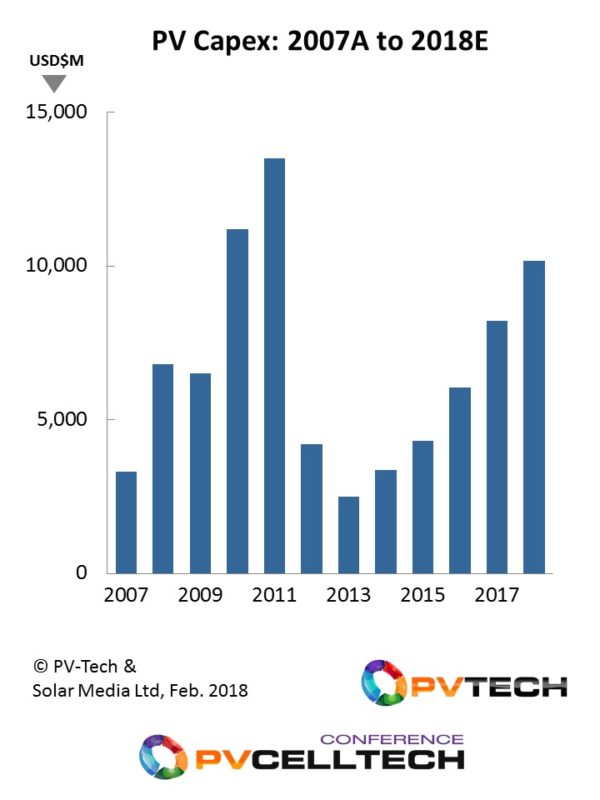 Several factors are fuelling annual capex growth in 2018 at the 25% mark.

Module supply continues to expand at unprecedented rates, with signs that 2018 will comfortably hit or exceed 120GW (despite the typical doom-and-gloom seen by many industry observers at the start of 2018, all of whom have been getting market forecasts wrong for years now).

Technology evolution is moving faster than before, with changes in wafer and cell manufacturing requiring significant upgrade spending, in addition to the new capacity being installed.

However, Chinese money rules today in the PV industry, and there are no signs that the appetite for investment into domestic companies will see a slowdown this year.

In fact, if anything, the expansions and outlays just get more ambitious every year, with companies that were modest GW-level cell and module makers just a couple of years ago, now building 3-5 GW cell and module factories with investments at US$500-1000 million each. And then of course, we have the multi-billion-dollar ingot pulling/cutting deluge in China that is just going through its first phase!

The only thing stopping oversupply is ramping new facilities and equipment – something many people forget to factor in when looking at supply to the market and relative demand levels.

Another leading contributor to 2018 PV capex is coming from the n-type capacity being added in China this year. From a technology disruption standpoint, this is where all the action is right now. Can they: can’t they make heterojunction work at the multi-GW level with a cost structure aligned with p-type mono market supply?

The question is somewhat irrelevant right now. Add in n-PERT and other n-type variants seeing investments within China, and there is enough for domestic and overseas tool suppliers to get engrossed in. The only problem arises here of course if backlogs become dominated by single customers trying to move from zero-to-hero, with precious little in-house knowledge to justify ramping p-multi lines for the first time, far less moving to heterojunction with new tool suppliers from the off!

The PV CellTech 2018 event takes place on 13-14 March 2018, in Penang, Malaysia. Going into its third year, the event has not seen so much priority on n-type before.

Anyone looking to find out exactly what is going to happen in 2018 (and beyond) for n-type capacity, and indeed which companies are driving the US$10 billion capex levels this year, should definitely attend.

The event will also explain why – despite the billions going into mono capacity – p-type multi still ruled in the industry during 2017. And now with a session all to itself, the burning question for many: What-next-after-PERC!

More details on how to attend PV CellTech 2018 can be found here.

With two evening networking activities and the 100GW Party to take in, the event is likely to retain its status as the must-attend manufacturing meeting of the year.