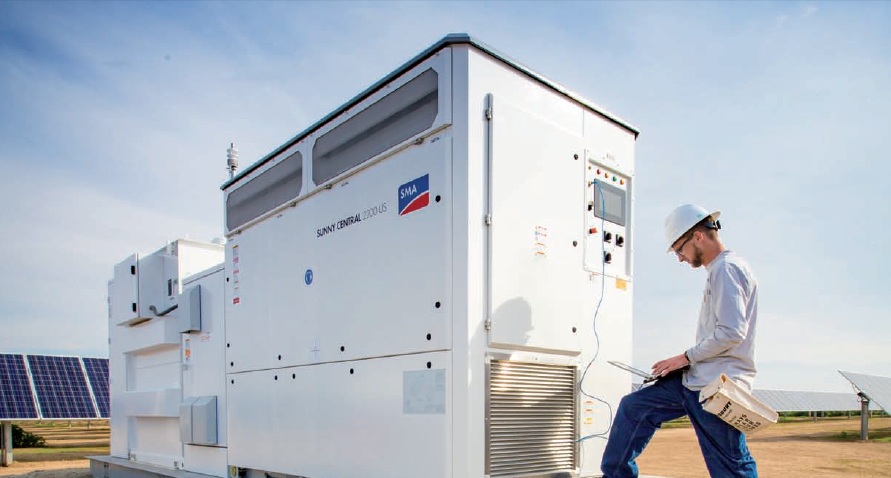 PV inverter manufacturers SMA Solar, SolarEdge and Enphase have all recently reported first quarter 2017 financial results. As already highlighted by PV Tech, US residential PV installers have reported softer than normal sales in the quarter and dependence on the US market for SMA Solar and Enphase, coupled to continued pricing pressure took a toll on revenues.

Although SMA Solar can claim to have the widest global footprint it has higher weighting to certain markets such as the US, notably in the utility-scale market.

The company blamed bad weather conditions that contributed to a 63% decline in sales in the first quarter from the Americas market region, with segment sales globally all down. 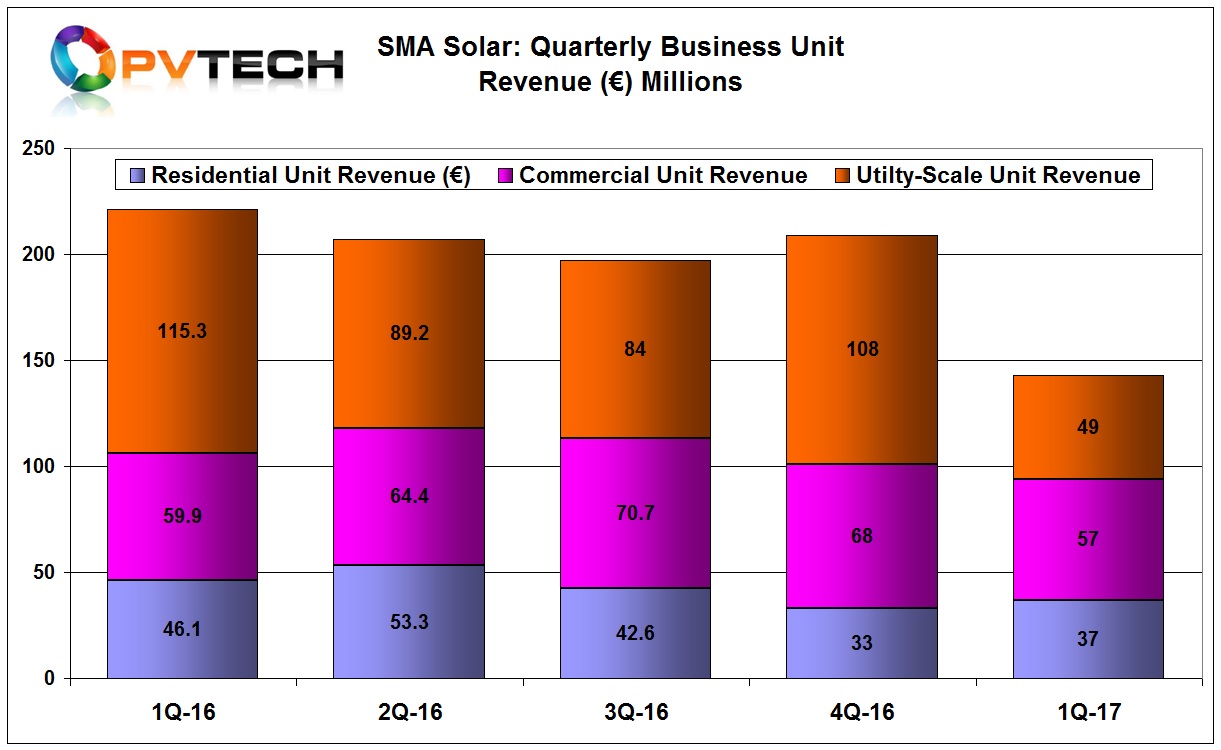 Sales in the first quarter of 2017 slumped to €173.2 million, down from €248.1 million in the prior year period and down from €238 in the previous quarter. Sales were near the higher range of guidance. 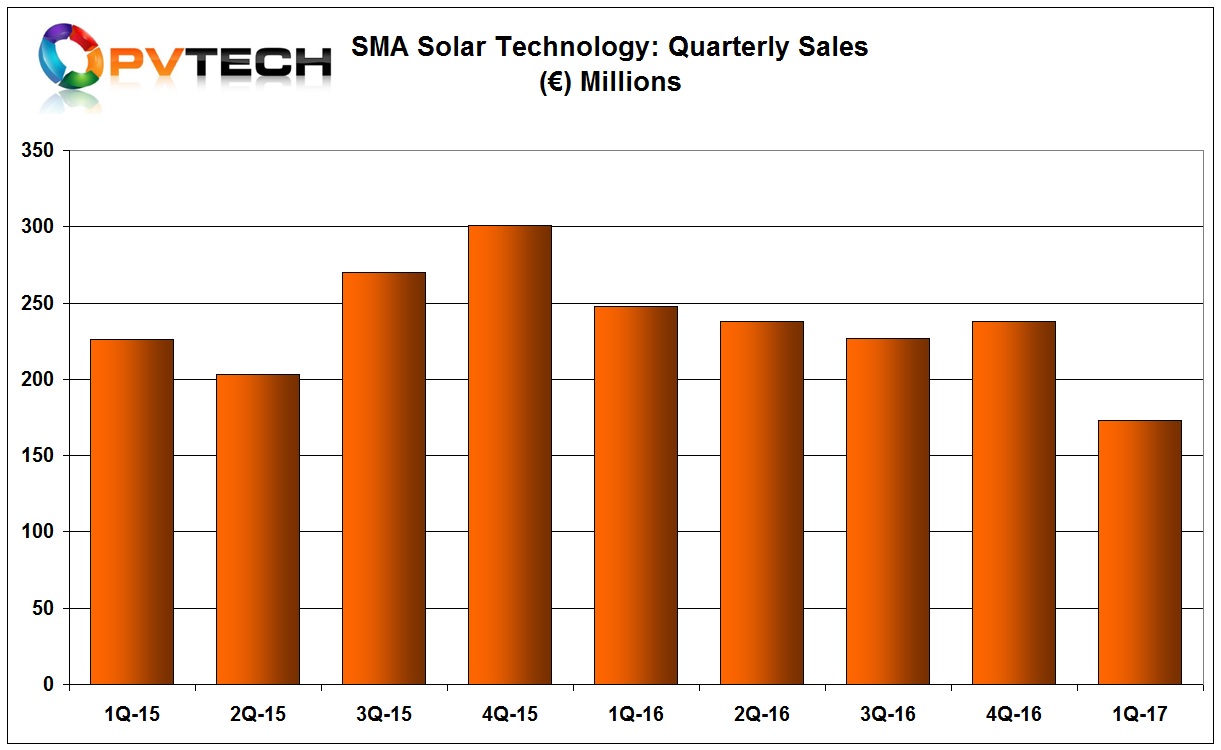 Product order backlog in the quarter was €231 million, compared to €295.1 million in the prior year period. This decline in order backlog has contributed to the company guiding full-year sales of €830 million to €900 million, down from sales of €946 million in 2016.

“The first quarter of 2017 was shaped by high price pressure in all markets and segments in addition to poor weather conditions on key sales markets,” explained SMA CEO Pierre-Pascal Urbon. “At the same time, incoming orders developed extremely positively in the first quarter, resulting in a book-to-bill ratio of 1.4. 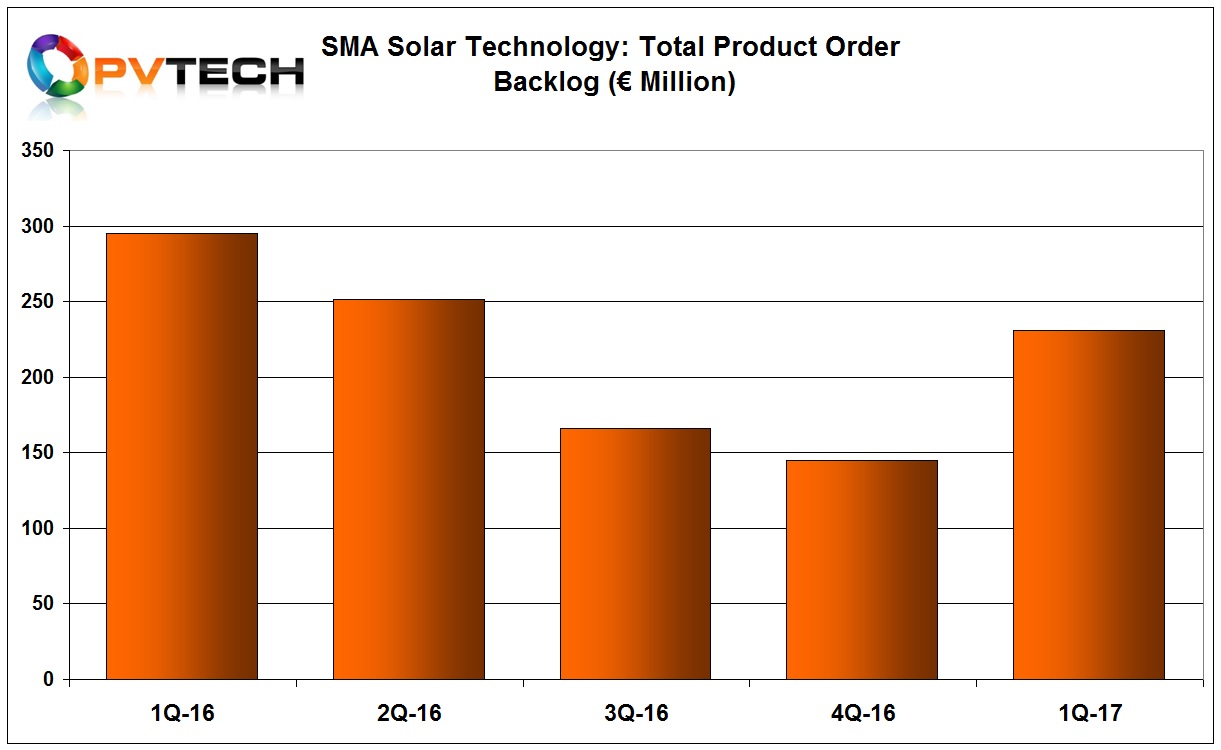 In contrast to SMA Solar and Enphase, SolarEdge Technologies has a more balanced product and geographical footprint mix and has typically benefited from little variability in quarterly revenue.

SolarEdge reported first quarter sales of US$115.1 million, up 3% from the prior quarter and inline with sales in the prior year period. The company noted that the revenue growth came from the European market and other parts of the world. However, SolarEdge noted that sales in the US market had remained relatively flat quarter-on-quarter but accounted for 64% of total sales, compared to 67% in the previous quarter. 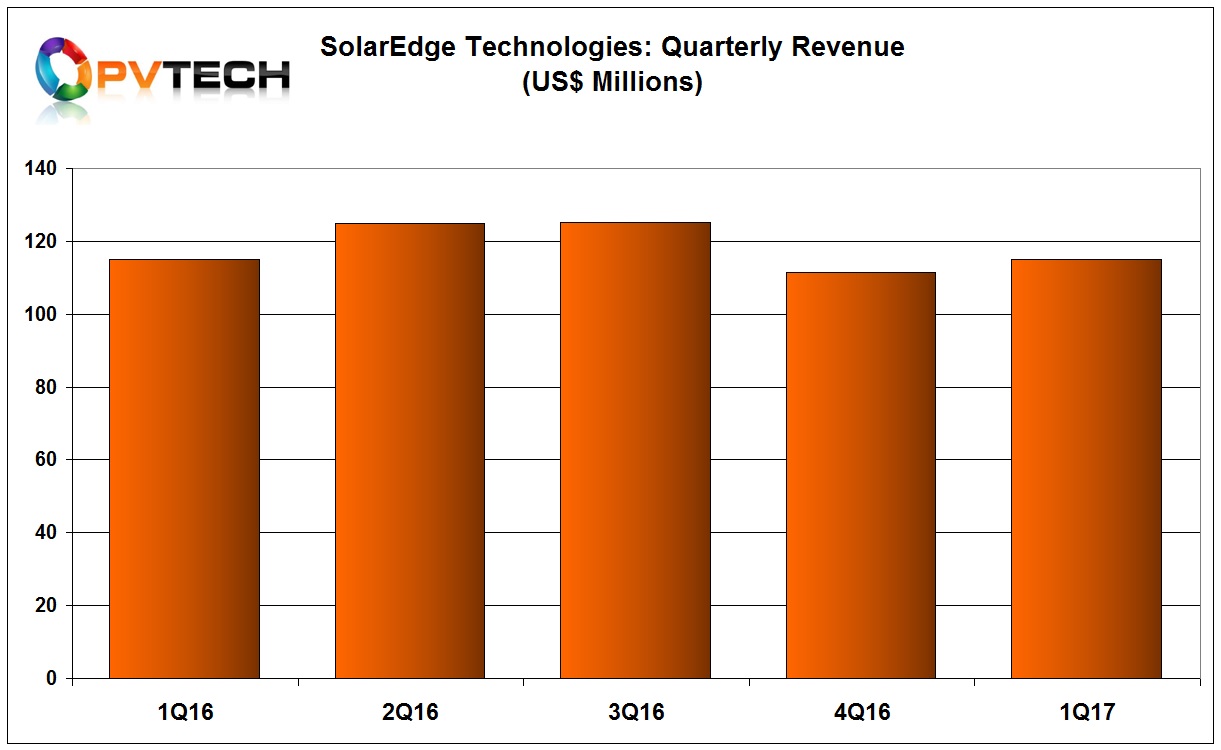 “In a quarter where the PV market is exhibiting decline in the United States, we have increased our revenues, profitability and cash flow generation quarter over quarter. Much of this is attributed to increased sales in Europe and our growing worldwide geographic spread,” said Guy Sella, Founder, Chairman and CEO of SolarEdge.

GAAP operating income was US$12.0 million, down from US$15.1 million in the prior quarter and from US$19.7 million year over year. 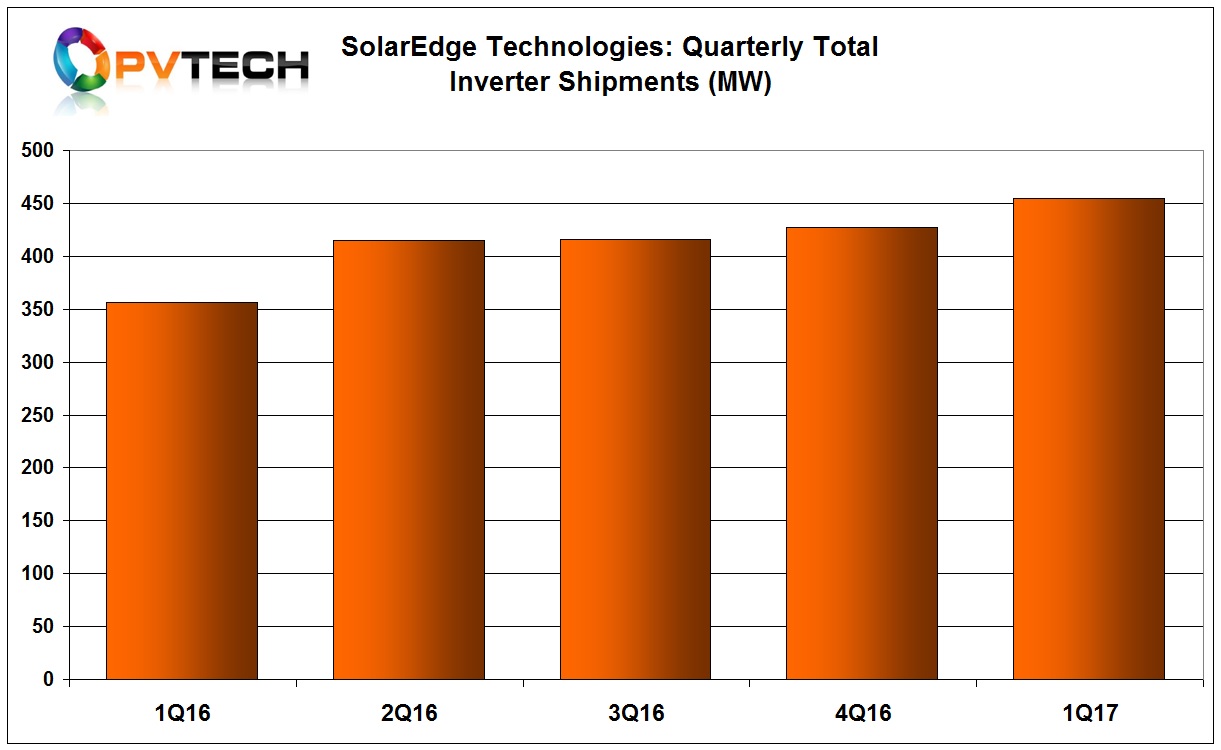 Although the company has lowered inverter production costs ASP declines are noticeable when looking at first quarter 2016 earnings and the first quarter of 2017.

SolarEdge noted that it expected second quarter revenues to be within a range of US$120 million to US$130 million and gross margin to be within a range of 32% to 34%. Management also noted in its earnings call that its 2018 business plan was to sales at around 50% each for residential and commercial markets globally and around 50% between the US market and markets in Europe and in Asia.

Leading microinverter firm Enphase Energy, which has markets weighted to the us and California in particular also took hit on sales and shipments in the first quarter of 2017.

Management noted in its earnings call that only 21 days out of 65 were suitable for PV rooftop installations in California during the reporting period, due to the wet weather.

Gross margin was 12.9%, lower than expected primarily as a result of cost absorption on decreased revenue volume in the quarter. The company reported a GAAP net loss of US$23.3 million. 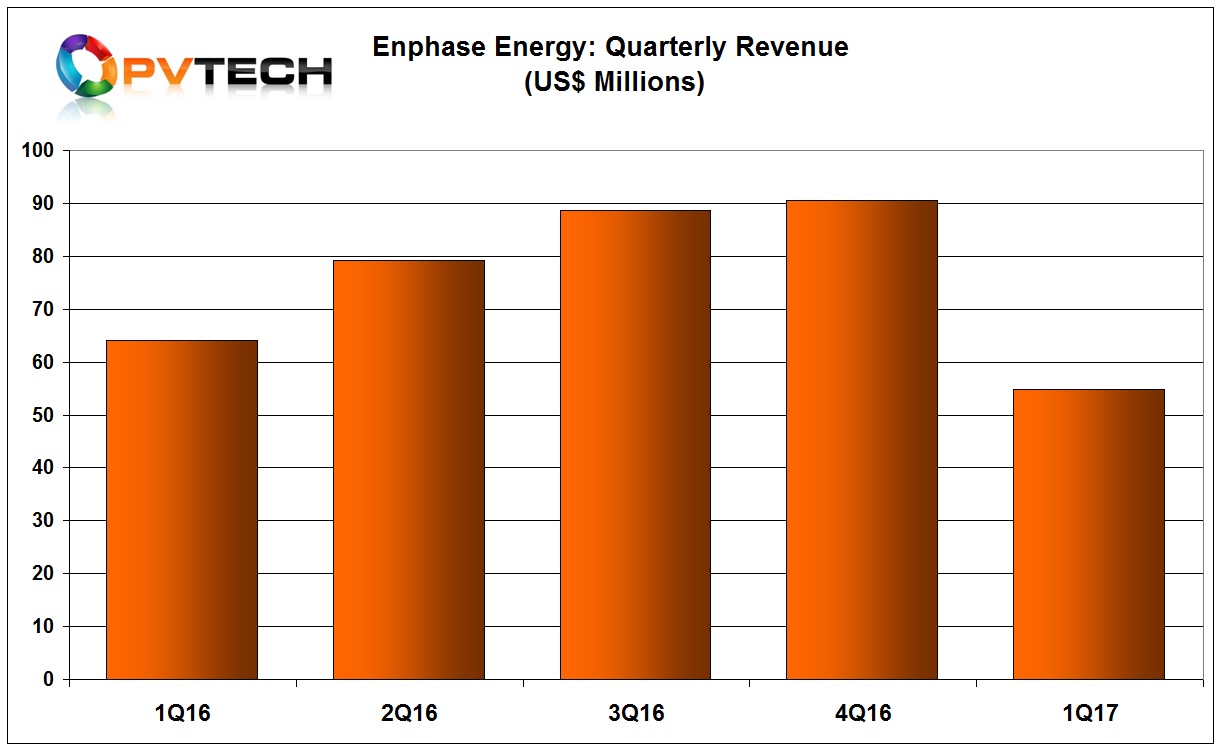 Microinverter shipments in the quarter were around 138MW, a 30% decline sequentially and a 6% decline from the prior year period. 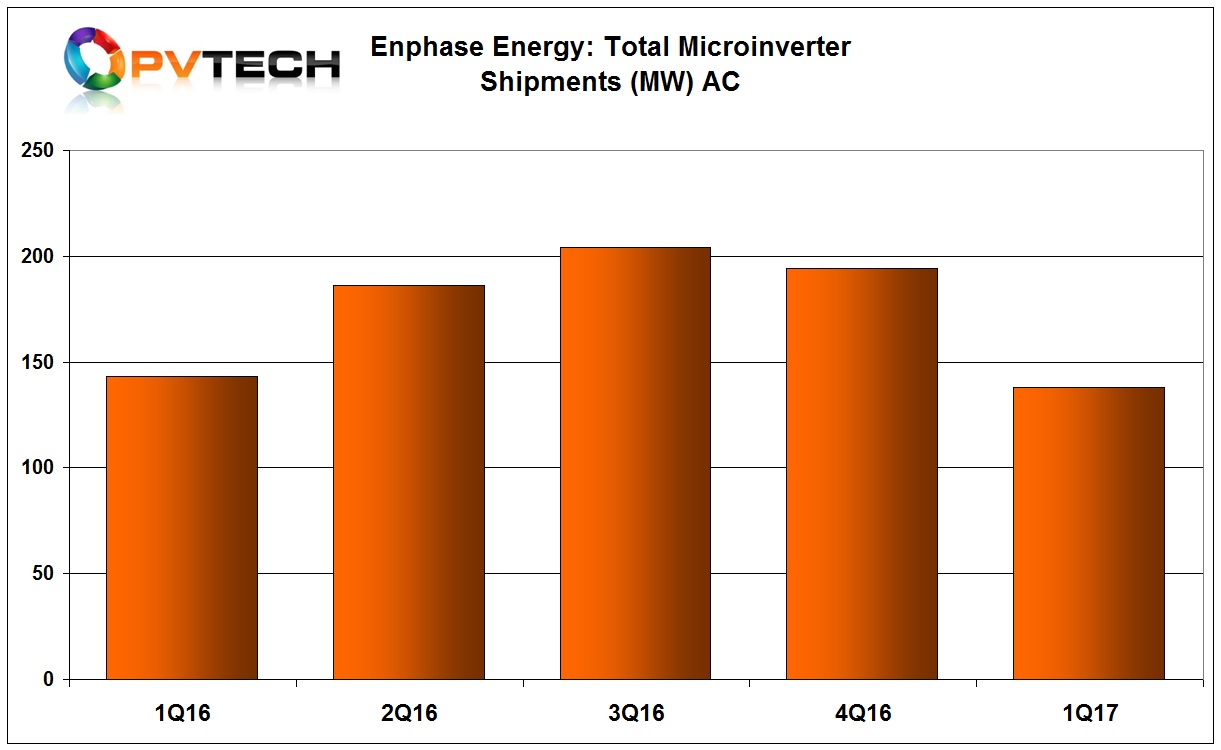 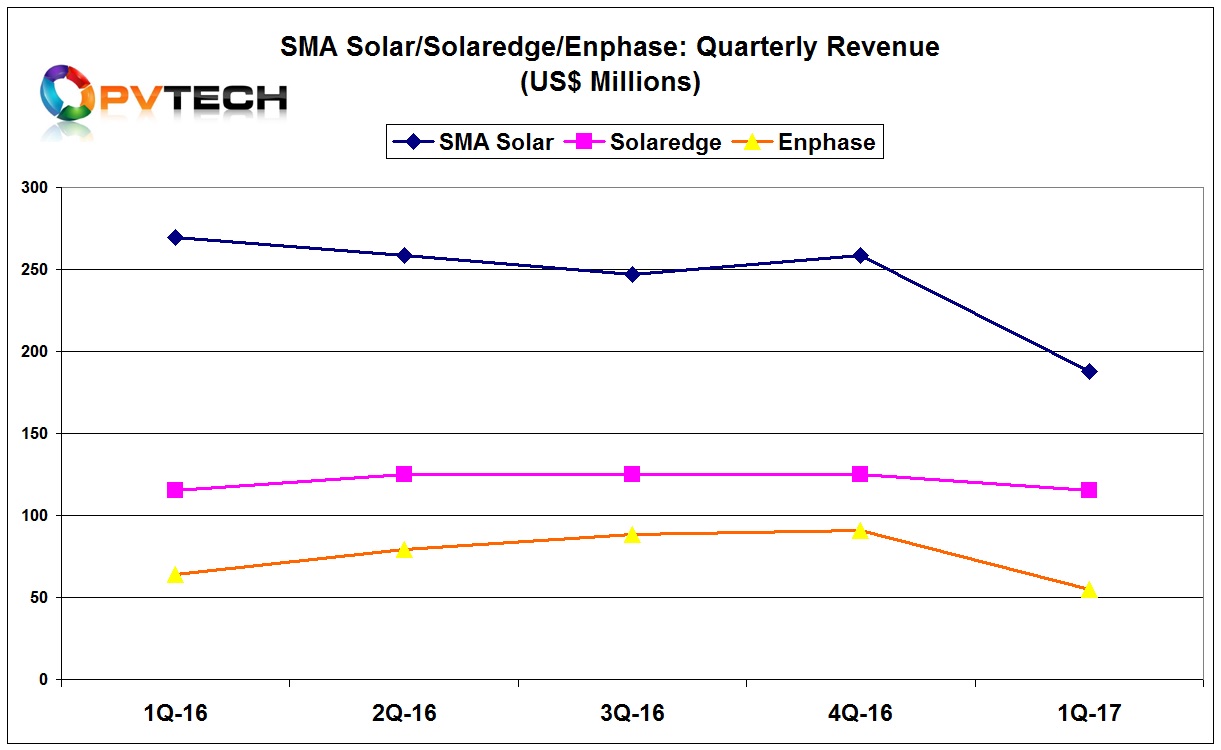