PV ModuleTech 2018: Asia-Pacific hot spots and the rise of mono-PERC with Trina Solar 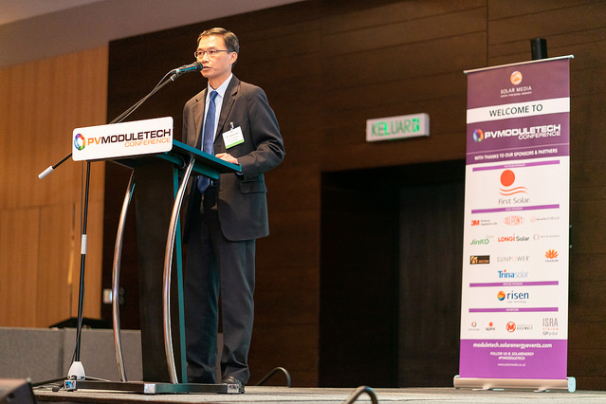 What trends do you see with mono-PERC technology?

Since coming onto the market, mono-PERC has already captured about a third of the world’s market for silicon solar cells and is forecast to account for more than half the market in 2022.

These commercial and industrial customers are big electricity users, however, they have limited rooftop space, so they need to generate as much electricity as possible from their rooftop installation. This explains why they have been the first to adopt the higher efficiency mono-PERC technology.

What are the key markets that Trina Solar is targeting in Asia-Pacific?

We are targeting all markets for sales because we see good growth opportunities across the region. The biggest solar energy markets in Asia-Pacific – outside China – are India, Japan and Australia but we also see that Thailand is a very sizeable market.

Thailand is actually the largest market in Southeast Asia for solar energy and we already have a big presence there thanks to the fact we have a manufacturing facility in Rayong, an industrial area southeast of Bangkok.

We are also very active in the Philippines, which is the second largest market in Southeast Asia and the largest solar farm in the Philippines – the Cadiz Solar Power Plant near Cebu – is a 132.5MW project that uses solar modules from Trina Solar.

On 4 September we launched our integrated Trinahome product into Malaysia. It’s the third largest market in Southeast Asia for renewable energy, but the market there is really starting to take off thanks to Malaysian consumers’ growing appreciation for the benefits of renewable energy. The other reason the market is taking off is that of favourable government policies that are encouraging households and businesses to use renewable energy.

We are providing solar modules to remote communities in East Malaysia. There is still a very small percentage of the population that don’t have access to electricity. Those without are mostly remote indigenous communities in East Malaysia’s Sarawak province. The indigenous people live in longhouses in the forest. They have been relying on electricity from small diesel generators, and this costs 40% more than electricity from the grid. But now, thanks to solar, they have a more affordable and reliable source of electricity.

India is a very big market for us and we have installed more than 3.5GW of solar capacity here, mostly utility-scale projects followed by projects for commercial and industrial users. We are moving into the residential sector in India and we launched Trinahome – our ‘all in one’ solution – in India this September. We see huge growth opportunities in India’s residential sector.

We have installed more than 1.5GW of solar capacity in Australia, mostly in the utility and the commercial and industrial segments. Australia’s solar energy market is very mature and developed but it continues to achieve good growth thanks to favourable government policies – particularly from state governments that want to increase the percentage of electricity generated from renewable energy. We expect that the adoption in Australia of energy storage systems will give a further boost to the growth of Australia’s residential solar market.

How is Trina Solar different to other Chinese module manufacturers?

Trina has become a truly international company with 65% of our sales coming from outside of China. We have now also moved up the value chain by offering the entire solar system that includes the other key components such as the inverters, trackers, mounting systems, etc. This also helps system integration. We are also providing battery technology through our own battery company called TrinaBESS, having recognised the importance of energy storage early on.

How has the integrated TrinaPro solution been received by the industry so far?

TrinaPro is designed for utility-scale ground mount, floating solar projects and commercial applications. It’s been well-received by project owners and investors taking long-term ownership. They see the value they are going to gain from TrinaPro, with the advantages it brings in terms of optimising system integration along with adding trackers and inverters. That is going to be a key differentiator of what Trina is offering right now versus EPC companies offering hardware components. No one else is offering a similarly packaged solution bundle today.

14 June 2022
Join us in Napa to unlock the key to reliable PV module supply to the U.S. market in 2022 & 2023. We'll also be gathering the main players in the US solar market for some wine tasting!
australia, india, malaysia, pv moduletech, sarawak, sorsea, southeast asia, thailand, trina solar, trinahome, trinapro