Interest in solar in picking up in Qatar and the Middle East more broadly, as countries look to decarbonise their energy sectors and take advantage of the vast solar resource. Thus far this has been dominated by large scale projects, with record-breaking tariffs.

How has the solar sector in the Middle East and in particular Qatar matured in recent years?

Veronica Bermudez: I would say that if we compare Qatar with all the countries in the region, they started later than most of the others, but in my opinion, they did it with a stronger commitment and a stronger decision.

For the first big power plant in the country, bidding was decided in 2020, January saw financial closure and it is planned to be commissioned at the end of this year. Considering that we have had COVID in the middle, building out a 800MW power plant in two years is quite an achievement.

They’re using really innovative technology. When commissioned, it will be the only power plant in the Gulf Cooperation Council (GCC) with bifacial modules, tracker technologies and automatic cleaning.

In parallel to that in Qatar, there are now two new tenders that have been opened for two lots of 400MW across two different sites, with the aim of reducing a company’s carbon emissions through solar. The projects are now in the bidding phase.

Moreover several other small scale projects in the commercial and industrial sector are being built to offset companies carbon emissions with renewable energy.

What are the biggest challenges of operating solar PV in the region still?

Ben Figgis: One word, soiling. Here, we see around half a percent per day soiling loss. So in other words, if you don’t clean your modules for a month, their power goes down by roughly 15%, depending on the time of year. And so obviously, that’s a critical challenge that needs to be dealt with.

But the next thing I’ll say about that is that there’s a lot of technologies that are being developed and there is space for a lot more innovation. Tackling soiling is really a blue sky area where a lot of different technologies are possible.

Having said that, if you look at the marketplace, the main technology that’s being deployed at the moment is cleaning robots. And so we are trying to do as much testing as we can, because there’s a lot of unknowns that go with cleaning robots. What do they do to the modules? How do the inverters respond to the moving shadow? What does it do to the anti-reflective coating? What is the cleaning efficiency? What is the best time of day to run it? How many times a week should you run it? So there’s many unanswered questions when it comes to robotic cleaning, and the other anti-soiling technologies as well.

Bermudez: Today we are mostly focusing on how soiling is impacting the PV module, but there are also all of the other components. In the long term we do not know how they may degrade, because soiling is also contributing to the degradation of power electronic components.

Also we speak about deserts, but not all the deserts are the same. So, there are humid deserts, [and] here in Qatar we have the best and the worst, we have a very dry sand season and a very humid season. So, the problems are completely different. And there are parameters that need to be integrated into the equation like condensation. Some soiling mechanisms lead to cementation, we have also high salinity, something that happens in all deserts that are coastal.

How challenging is it for smaller solar companies to develop projects in Qatar?

Bermudez: The big players can bid in with lower prices, always. And we see that more or less, there are always the same handful of companies. Start-up companies may feature if they have any specific added value or innovation that can be integrated in.

Figgis: Yes, and if you’re a start-up, you need to prove your technology to your customers and to your investors. That’s somewhere QEERI plays an important role, because we have a state of the art, pilot scale outdoor testing facility, we can test and validate technologies from start-up companies under real desert operation conditions.

We’ve done that for several start-ups companies in the region, for example. We issued a test report that companies then used to show its customers as a demonstration and validation element under real life operations. Having a third-party independent testing report in desert conditions in this area, that’s gold for commercialising a new technology.

Would you like to see more support coming in for these smaller players?

Bermudez: I think that there should be support to diversify the market and to open new avenues for technologies that are today maybe not really mature, but have a niche where they can excel and can provide that added value.

But also, I am not really in favour of government support in general. Because I really think that the technology does pass or move into the market, if there isn’t a real added value. If there is a real added value, players in the market will either invest on it, buy it or they will adapt it.

Forcing things can lead to the public turning against the technology because it is subsidised. So I am in favour of supported research and development and innovation because it is needed to allow these players to demonstrate their technology or their innovation in the country or in the region.

29 November 2022
PV ModuleTech EMEA in Madrid on 29-30 November 2022 will address the factors underpinning the changing PV module landscape, gathering together all the key stakeholders across the value-chain from module production to field testing. Join us for presentations from the leading players in the sector, clearly identifying the opportunities and challenges set to impact module supply to Europe and the Middle-East over the next few years.
mena, pv moduletech, qatar, qeeri, robotics, soiling, subsidies, testing facility 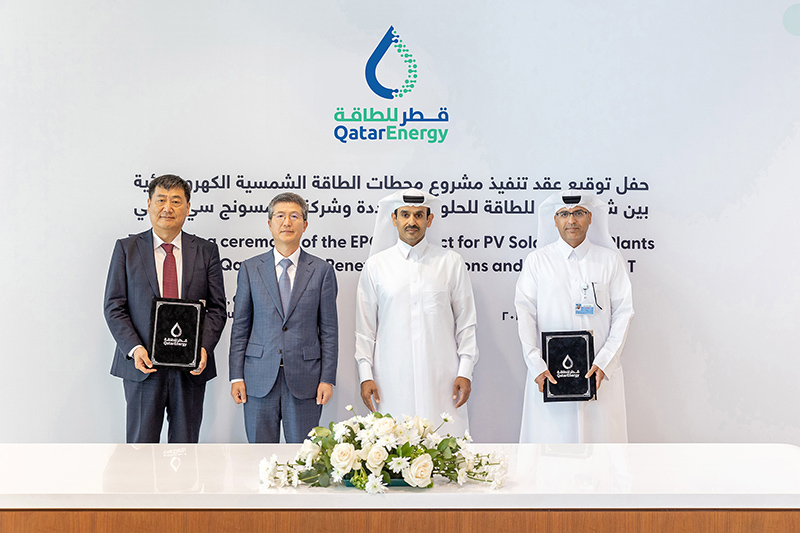 QatarEnergy appoints Samsung C&T as EPC for 875MW of solar

August 24, 2022
QatarEnergy has selected Samsung C&T as the EPC contractor for two large-scale solar PV plants in Qatar with a total capacity of 875MW.