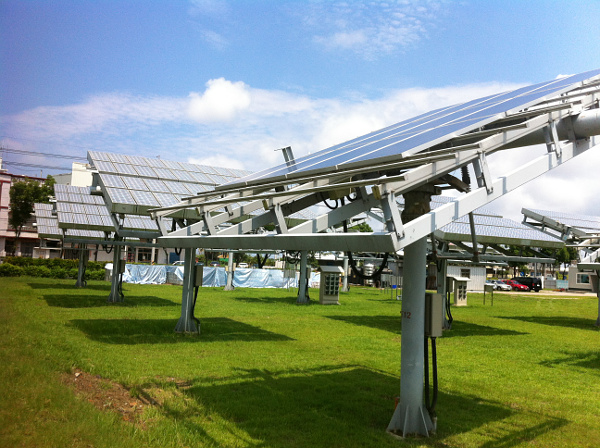 Last week, I outlined the basis for what can now be viewed as the Taiwan Solar 2.0 phase, with c-Si manufacturing in the country having been reshaped in order to remain competitive in the PV industry going forward.

This article summarises the updated analysis by our in-house research team at PV-Tech, where we have adjusted our models and forecasts for the 20 companies active in Taiwan today producing ingots, wafers, cells and modules in Taiwan. Once we move into Taiwan Solar 2.0, with the imminent mergers and re-assignation of subsidiary factories, this number will move closer to 15 by the end of the year and further downwards at the start of 2019.

The core data used for the analyses below is adapted from the most recent release of the PV Manufacturing & Technology Quarterly report, compiled by the in-house market research team here at PV-Tech.

The themes and narrative underlying the research and methodology were established following my trip last week to Taiwan, overlapping with the rebranded 2018 Energy Taiwan (incorporating the former PV Taiwan Show, and co-located with the country’s Circular Economy Taiwan event), held at the Nangang Exhibition Center in Taipei from 19-21 September.

Resetting the focus from cell to module revenues

During the 2018 Energy Taiwan show last week in Taipei, the revised production plans of all Taiwan manufacturers were heard. The use of the word ‘plan’ here is rather subjective, as only a few companies have real plans going into 2019. Some, in particular those with legacy wafering or multi cell capacity, are still going through the realization phase that 2019 is going to be a year of exiting manufacturing altogether.

Therefore, the revised forecasting we are using now is based on our assessment of what all the companies will do next. This is not too difficult however, as Taiwan manufacturing tends to operate in a collective manner, both in adopting technical improvements and in existing specific manufacturing activities. This will be explained during the rest of this article.

The full analysis post-Taipei last week is clearly shown in the graphic below. This tracks historic (2013-2017) and forecast (2018-2019) production across the value-chain (ingot-to-module) for all the companies manufacturing within Taiwan. Any capacity held by Taiwan-headquartered companies outside Taiwan (China, Vietnam, Japan and Thailand) is excluded from this analysis, so to be specific to production in Taiwan only. 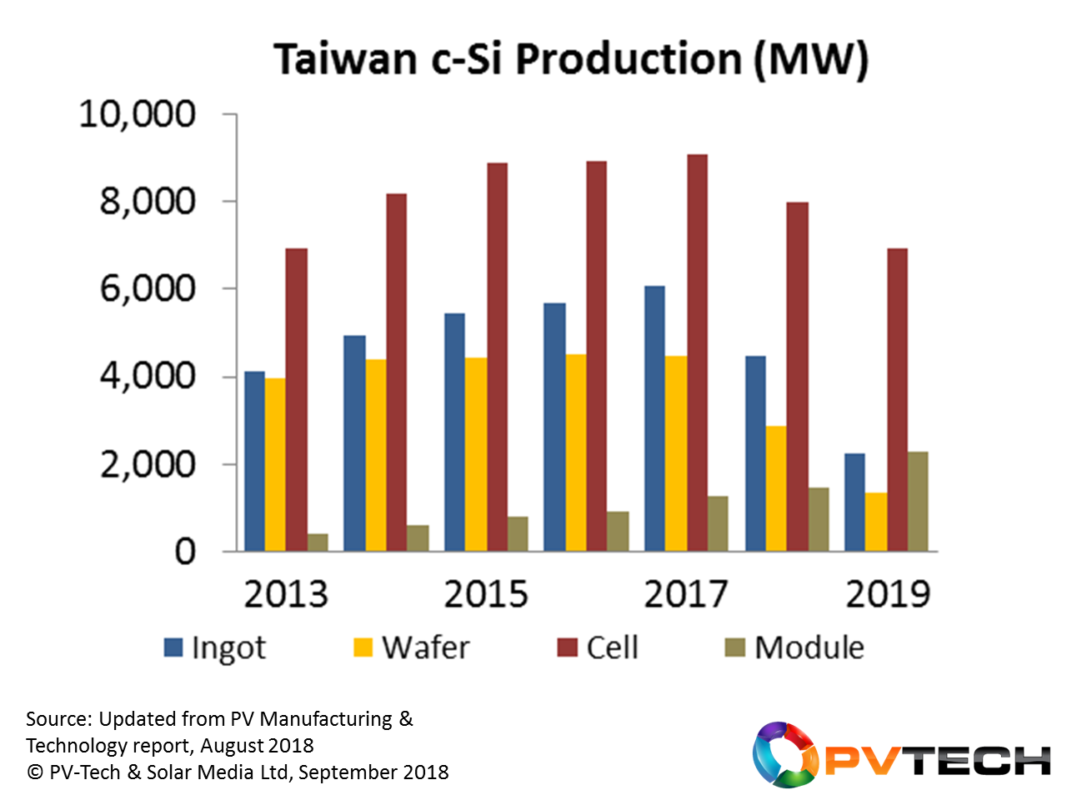 Referring specifically to the graphic above, ingot production in Taiwan (like much of the capacity in the country in the past) was dominated by casting, with only one company having domestic mono pulling capability. Casting in Taiwan had been the subject of considerable optimization, in particular from Green Energy Technology and even today, ingots (bricks) remain in demand for high-quality multi wafer supply in China. However, 2018-2019 will see significant declines in multi casting levels, with the strong possibility that this part of the value-chain will disappear entirely by 2020, left only with minimal pulling capacity levels.

Wafering largely follows the same path as ingot casting, as discussed above. Historically, wafer production levels were trending below ingot casting levels (on a per-Watt basis), with wafer slicing in Taiwan having no technical advantage compared to lower-cost channels available within China. As such, there remains a possibility that wafering in Taiwan will be completely eliminated within the next 12 months. High levels of capacity have been retired since China-531 and there remains little chance of this tooling being reinstated. Only a dramatic rebound in end-market demand globally (leading to multi having a prolonged existence in the industry) could possibly create this (somewhat unlikely) scenario.

Until today, cell production has been the raison d’être of the Taiwan manufacturing community. However, as discussed in last week’s article, Taiwan Solar 2.0 will see changes whereby modules will become a major focus in the country.

This comes over clearly in the graphic above. To fully appreciate this, it is best to compare cell production with module production, and remove the contributions from ingot/wafer that are likely to be phased out shortly. Taiwan collectively came to prominence as a pure-play cell offering, with Neo Solar Power being the first company to put forth a different strategy, more aligned to that of the global activities of Chinese-based SMSL players.

During 2018, Taiwan will see its first annual decline in solar cell production, and this is forecast to continue during 2019 and 2020. At this point, cell capacity will have gone through its rationalization phase, characterized by declining p-type multi and the dominance of p-mono PERC.

Indeed, this final topic was one of the key takeaways from the discussions in Taipei last week that has commonality when looking at what is happening today in China, and what is set to unfold in that market during the rest of 2018 and 2019.

Most of the p-type multi cell capacity in Taiwan had not been moved to multi-PERC. This was not news from last week, but dates back the past few years when most had realized that multi-PERC was not worth the investment and that the know-how to do this was not widely rooted within Taiwan. Perhaps this caution has turned out to be a blessing in disguise.

As soon as China-531 happened, it is even harder to make any multi-standard to multi-PERC upgrade justification (or attempt to). If one widely believes that multi has become a losing game, then performing tricky (and minimally beneficial) upgrading is barely worthwhile. Indeed, on a related topic, what should we make now of all that spending and effort moving multi wafering to diamond-wire saws and the so-called and much-hyped distraction of ‘black-silicon’?

However, a couple of factors are also making the multi-BSF to multi-PERC upgrade unworkable and undesirable. First, most of the multi lines are using old equipment (up to and over 10 years), and moving a line from multi to mono and mono-PERC is simply uneconomical. But the kiss-of-death for these old multi lines come from the fact that many are now – or are about to become – fully depreciated. This makes retiring these lines almost a no-brainer today, and avoids the red-flag outcome associated with any crippling impairment charges to operations desperate to reach break-even status.

Therefore, during 2018 and 2019, a significant portion of multi capacity will be permanently retired in Taiwan, driving down production levels during 2H’18 and 2019; and with this trend continuing during 2020 until the cell landscape is stabilized with competitive technology (performance and cost).

Again referring to the graphic above, the only segment of the value-chain to see growth in the 2017-2019 period is modules. For most of the companies driving the module growth, the target is domestic market-share. The more ambitious proponents are likely going to use domestic shipments purely as a secure baseline level, with overseas volumes (either from Taiwan or Southeast Asia sites) being the main growth-driver; either for third-party module sales or in-house projects business.

The only caveat in this respect is that just one company in Taiwan has any experience doing this so far: Neo Solar Power. However, NSP is the driving force for URE and will likely be able to secure the necessary ongoing investments needed to sustain a viable projects business (while co-managing an upstream production/technology operations).

Cell production in Taiwan is shown in the graphic below. Here, we have segmented the bottom-up company-specific analysis across n-type and p-type, mono and multi and standard-BSF and PERC cell variants.

Only by retiring the large quantity of multi-BSF cell capacity in 2H’18 and 2019 (as our forecasts predict) will Taiwan move its collective technology roadmap from multi-heavy to industry-aligned. Looking at the new Taiwan Solar 2.0 roadmap below, p-mono PERC production moves through the 50% barrier in 2019. This may occur quicker of course, if the speed of multi-capacity mothballing is faster than our forecasts predict.

Also, the levels of multi-PERC may be optimistic below. Much of this will be understood fully in the next few months, in particular depending on whether URE decides to effectively kill all-multi across the URE JV companies. 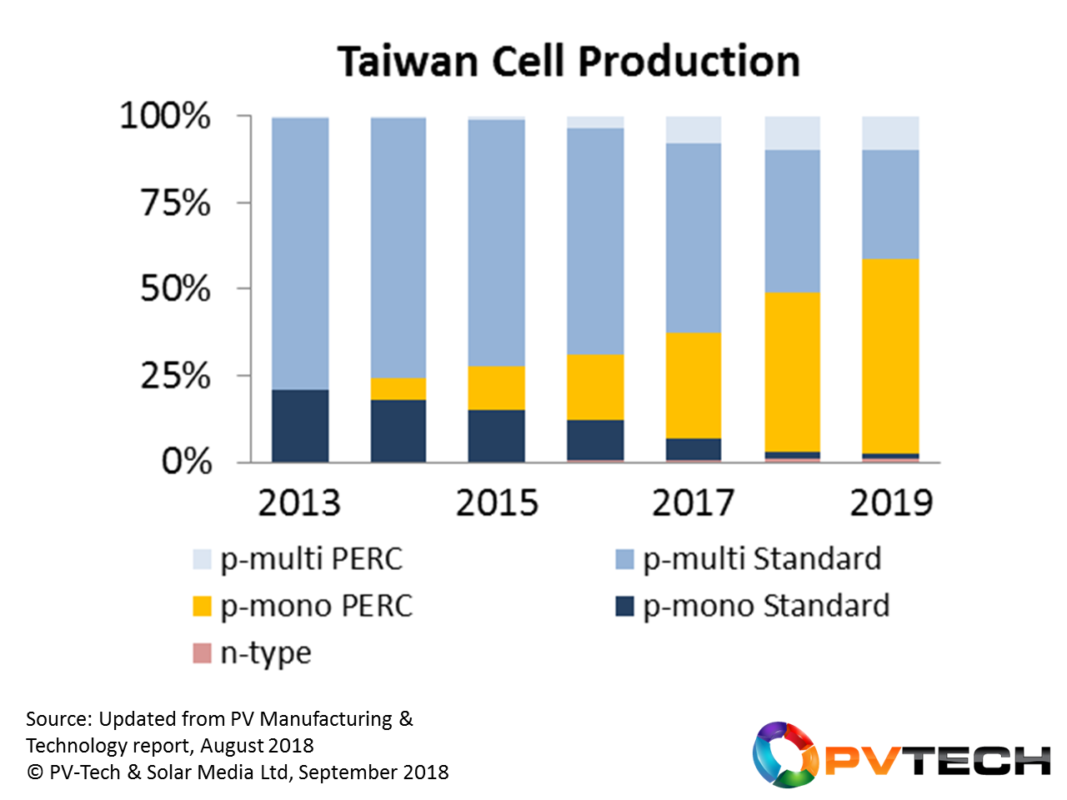 In opening up its end-market through creating an annual GW-level demand pull, the country is now going through a variety of downstream-related issues that are not new to the industry; what is different however is the general acceptance of this demand being the sole domain of the upstream segment and integral to its recovery and making Taiwan Solar 2.0 a profitable scenario.

The process of capacity rationalization will dominate proceedings until the end of 2019, and perhaps only at this point will we be in a position to fully assess the ongoing value-added offerings from the likes of URE and others.

However, without change, manufacturing in Taiwan would most likely have ground to a halt or racked up annual losses on a par with the slow and painful death of Japanese PV manufacturing in the last decade.

For almost every partial observer globally, the PV industry needs Taiwan active and profitable, in the same way that having as many non-Chinese differentiated technology-providers (SunPower and First Solar in particular) is essential to technology and processing quality being championed as core manufacturing priorities.

Taiwan Solar 2.0 will have a finite lifetime of course, but if it simply marks the period where Taiwan solar moved out of the red then it will have fulfilled its fundamental goal. Anything else should really be considered a bonus at the end of the day.