The second installment of our latest two-part blog on PV Tech, presenting the latest findings of the PV Tech in-house market research team, with all data and graphics shown in this blog coming from the August 2017 release of our PV Manufacturing & Technology Quarterly report.

The Silicon Module Super League (or SMSL) is comprised of seven companies that will each ship in excess of 4GW of modules this year, well above all other module suppliers to the industry.

Part one of the blog series covered the geographic shipment profile of the SMSL, the share of global module supply out to the end of 2018, and explained why the period from 2016 to 2018 is seeing almost all in-house cell lines being upgraded for higher performance cell production.

Part two here covers the upstream manufacturing capex from the SMSL, split out across polysilicon, ingot, wafer, cell and modules stages. It also covers blended global ASPs, cost of goods sold, and the blended gross processing margins that factor in both in-house and third-party outsourcing costs.

Leading companies from the SMSL will be presenting and discussing module supply at PV ModuleTech 2017, a must-attend meeting for all project developers, EPCs and asset owners/managers looking to see exactly what can be expected from the large-scale utility solar site additions coming online in the next 3-5 years.

Capex from the SMSL

The increase in manufacturing investments by the SMSL is shown clearly in the graphic below. The capex figures for each company are derived from backing out upstream (or manufacturing, or module-based) capex from overall capex figures that often include downstream project acquisition and build-out costs. We then analyse each company’s in-house capacity and/or upgrade/debottlenecking activities across each of the manufacturing value-chains in question (for most of the SMSL this includes ingot-to-module). Other contributions to manufacturing capex are added, such as maintenance and routine-tool-upgrade spending.

The net result, shown below, reveals one reason why this group of companies has become so dominant in module supply today. Capex has increased by more than 4X between 2013 and 2017, with 2018 levels (while preliminary for now) still showing healthy continued investments into upstream manufacturing. 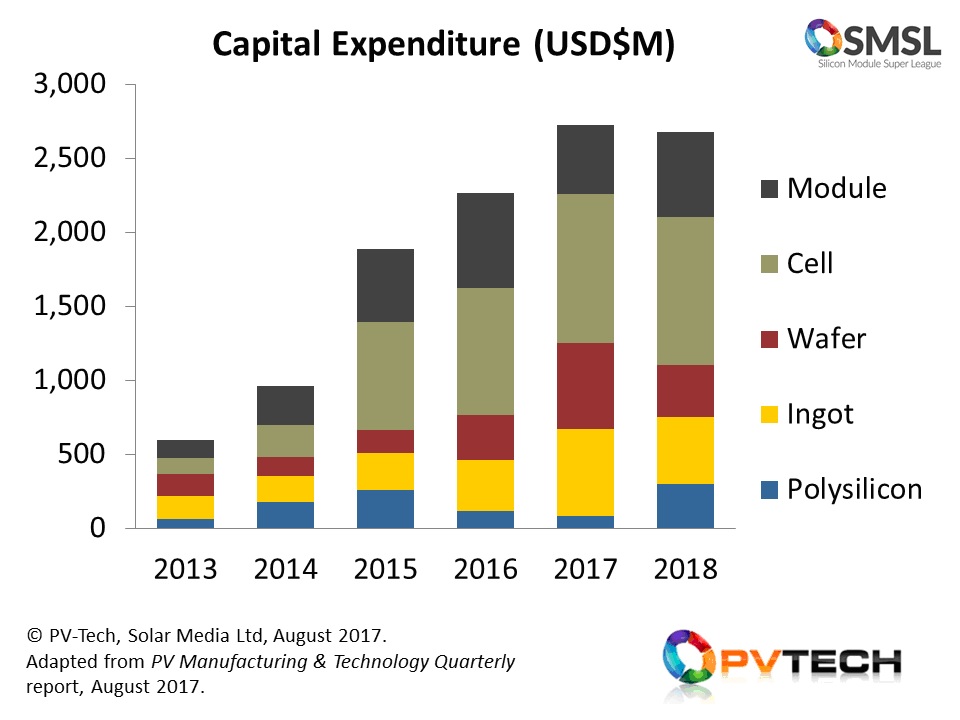 In many ways, the growth trends and the value-chain allocations are indicative of the c-Si based industry as a whole, and in particular the p-type supply-chains.

Ingot and wafer capex is currently going through a major revival, due to the rush to add significant new capacity levels for ingot pullers and associated diamond-wire-saw (DWS) based wafer slicing tools. Multi also is now really starting to have an impact, in particular at the wafer stage, as many Chinese multi wafering companies seek to implement DWS technology in expectation of a surge in demand from cell makers that wish to alter front-end cell texturization.

While many companies have gone vocal about the whole multi DWS/black-silicon phenomenon, it may simply be that the success of Canadian Solar and GCL alone is going to determine whether this approach is real or not, and something that will be essential to simply to stay competitive from a multi wafer supply standpoint. Either way, capex allocation is guaranteed, and no complaints can be expected from the equipment supply-chain.

Spending on cell lines is shown to dominate the SMSL capex growth trajectory. This is directly a result of the factors that were covered in part one of the blog yesterday, and the need to keep in-house cell supply at reasonable levels (without being overly dependent on third-party cell makers in China and Taiwan), while also seeking to have best-in-class p-type mass production cell capacity installed across (mainly) PERC based cell types.

Cell spending has also been kept high, as the previous trend (that permeated across some of the SMSL and the wider industry in China as a whole) of acquiring distressed cell capacity from failed ventures would appear to be a thing of the past.

Tool throughputs, inspection and automation have all been radically improved on cell lines these days, with production lines typically being specified with throughputs north of 130MW, owing to a combination of single and multi-lane arrangements.

Add in here the current use of 5 busbars and PERC, and the cell line of 2010-2012 is essentially worthless in value, other than the bricks and mortar making up the four walls around it.
An interesting observation is that all our capex forecasts for the SMSL, and the industry as a whole, have been consistently upgraded in the past couple of years, and there is every chance that 2018 could see capex growth from the SMSL. Module sales pipelines and profitability however will be the ultimate judge of this.

Ask almost any GW scale module supplier from Asia back in 2012 if they would be happy with shipping >4GW of modules in 2017, with module gross processing margins in the low-teens (10-15%), and most would have bitten your hand off!

Of course, we know it is all about operational metrics, but with the SMSL (with the exception of GCL-SI and LONGi Solar) – and so many other midstream cell/module producers in the solar industry today – it is all about maximizing profits making and selling modules. Fail on that account, and your problems are indeed much bigger.

Having enjoyed gross margin levels above 20% for much of 2015 and the first half of 2016, on the back of ASPs in the 50-60c/W range, the climate for module ASPs changed on 1 July 2016, when first half 2016 China connection demand was temporarily turned off. This then led to nine months of rapid ASP declines until earlier this year. This is evident in the graphic below. 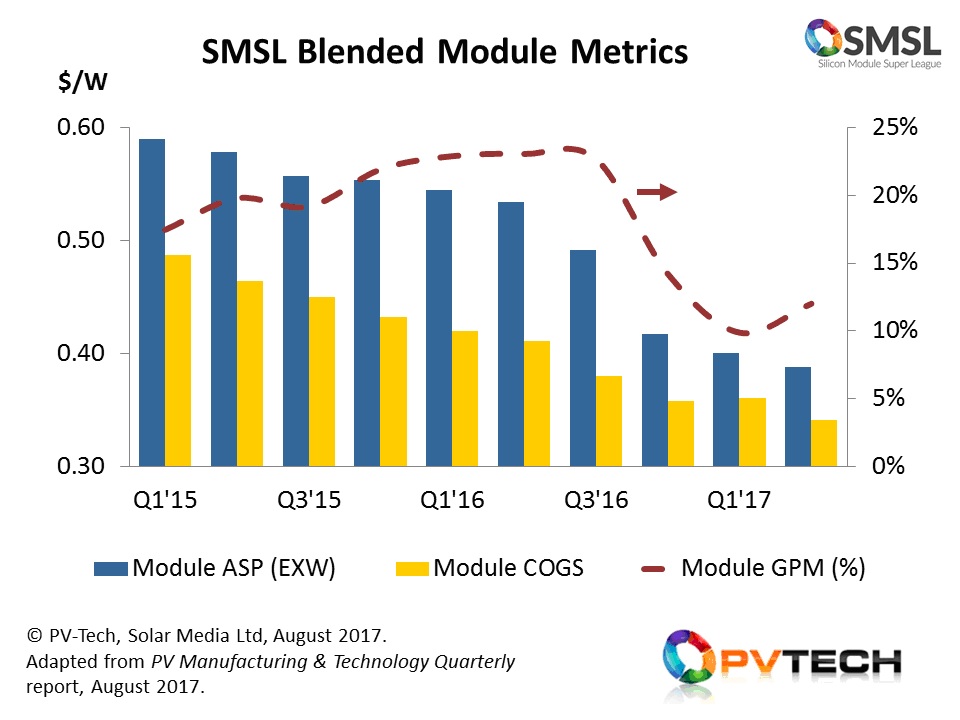 While still trending (globally) downwards, the speed at which ASPs are falling is somewhat under check for the SMSL, with only short-term polysilicon pricing being the difference in a few pennies plus/minus on COGS figures.

For many across Asia, and in particular China, Taiwan and much of Southeast Asia, returning low-teen gross margins, keeping operational margins in the black, and sustaining tens of thousands of jobs, is largely job-done from a business standpoint.

So long as working capital (or more accurately cash-flow) is sufficient to allow investments as and when the market demands, there is essentially no reason why all members of the SMSL cannot continue to lead the industry in terms of market-share and p-type product availability. The threat from new-entrants or domestic challengers (either seeking to be zero-to-hero n-type revolutionaries or merely copycat p-type followers) indeed becomes less relevant, as SMSL market-share levels move from 40% to 50% to 70% and higher. All-others are then left to carve a niche and adapt business operations as their served markets dictate.

However, getting tactics and strategies correct to be a long-term profitable multi-GW module supplier to the solar industry is far from a walk-in-the-park. Indeed, less than ten companies over the past 20 years have managed to get this right time and time again. The number is probably less than five, but certainly much less than all the companies that have at various times have hit the marketing-button to shout about being on somebody’s Tier-1 (or pseudo-bankable) listing where often the qualification criteria is somewhat removed from reality.

In fact, aside from current market-share levels of the SMSL – or the financial metrics being reported each quarter – their long-term success is only possible if they are actually delivering modules to the end-market that are reliable and can last more than 20 years, and often deployed in harsh and varying climates and conditions; and if warranties and guarantees on performance can truly be honoured, and material choice used in module assembly can be accurately tracked back with full traceability and repeatability.

In this respect, we start to move into real investor module-supplier choice criteria. While this has to varying levels always been an integral part of utility-scale solar farm design and component supply, the new technologies on offer from the SMSL are now complicating what was never an easy task.

Indeed, this issue has been a key driver behind us establishing the PV ModuleTech 2017 conference, and creating a credible platform to understand the issues that really matter for module-supplier and technology-choice across the tens – if not hundreds – of gigawatts of utility solar deployment that the SMSL may contribute over the coming decade.

The stakes could not be higher.

Learning more about the SMSL and industry supply trends

To access the underlying data and analysis of the SMSL that has been shown over the two blogs this week, including all manufacturers from polysilicon through to module production, the most recent version of our PV Manufacturing and Technology Quarterly report was released at the start of August 2017.

PV ModuleTech 2017 registration is open for the November event in Kuala Lumpur, Malaysia, with the topics and themes reviewed in the blog series set to be covered on stage by key companies making up the SMSL grouping.

A free webinar has been scheduled by PV-Tech on 30-31 August 2017, “PV Module Supply in 2017: Leading global suppliers, performance benchmarks & maximizing investor returns.” To register for one of the webinar times, please follow this link.