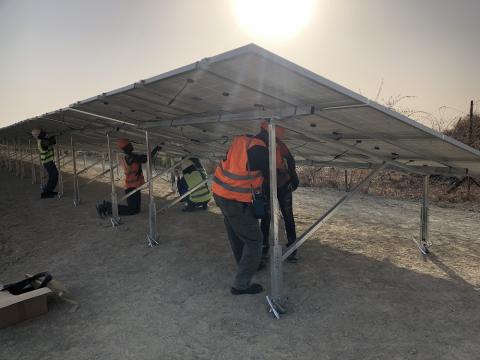 A just-commissioned solar and battery storage system will reduce diesel consumption by at least 80% at a base for 300 humanitarian workers in South Sudan, managed by the UN’s International Organisation for Migration (IOM).

Independent solar power producer Scatec Solar, which is headquartered in Norway, said it has completed work on the project, combining a 700kWp solar PV system with a 1,368kWh battery energy storage system (BESS) and connected to existing diesel generators onsite.

The project is sited at the Humanitarian Hub in Malakal, South Sudan. According to the UN, the workers onsite – spanning more than 30 different organisations – service almost 30,000 internally displaced people who live in the UN’s Protection of Civilians (POC) site adjacent to the Hub. Until now, it had been using around 800 litres of diesel every day.

The system has been delivered to the IOM on a leasing deal. Scatec Solar described the arrangement as a “flexible energy supply agreement,” with CEO Raymond Carlsen saying he believed similar deals could be replicated to support humanitarian operations elsewhere. The Malakal scheme is Scatec Solar’s second hybrid project for a UN organisation in the Upper Nile State of South Sudan, with a third expected to follow soon. For Malakal, the company partnered with renewables developer Kube Energy. PV Tech reported that work got underway in May 2019, with the hybrid solar-plus-storage technology joining a solar pump system which helps supply 500,000 litres of water each day.

“Through providing leasing of solar hybrid plants, we are reducing the barriers for using renewables,” Raymond Carlsen said.

The system was partly funded by the UK government’s Department for International Development and will help, the UN said, slash onsite power costs by 18%. As well as reducing greenhouse gas emissions and air pollution onsite, the noise from diesel generators is greatly reduced, with the region enjoying sunshine every day, even during the rainy season.

“South Sudan enjoys sunshine all year round. Even during the rainy season, we still have long periods of sun, so this bid to shift to solar power was a no brainer. It made absolute sense to fully optimise the power of the sun in this way,” Jean-Philippe Chauzy, chief of mission for IOM in South Sudan, said.