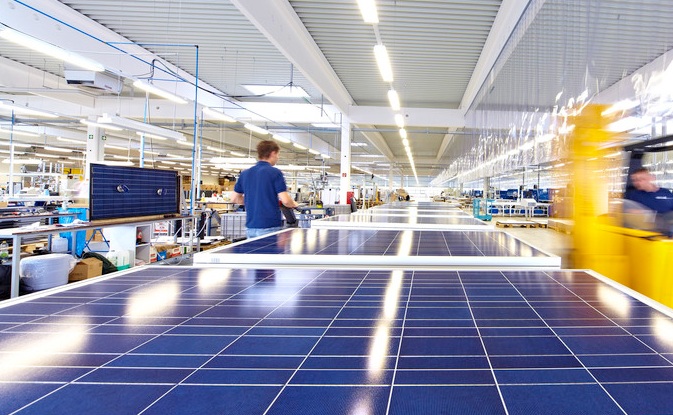 European solar industry trade body SolarPower Europe has said it has started a major campaign to bring back at least 5GW of large-scale PV manufacturing in the region, including the complete supply chain required to support the scheme.

Dr Christian Westermeier, President of SolarPower Europe said, “SolarPower Europe today has brought forward its policy asks to develop all segments of the manufacturing value chain in Europe. We believe that the time is right to focus on developing the supply side policy framework to support the new market opportunities that SolarPower Europe has fought for, and won, on the Clean Energy Package and in the Trade case, over the past year. Demand for solar is set to rise soon to around 15GW a year in Europe and we should now see a concerted effort to deliver on every segment of the industrial value chain here in Europe. Our members unanimously backed this call both in our Industrial Strategy Taskforce and at our Board meeting. We want to see all solar products, including wafers, cells and modules, made in the EU in the coming years.”

However, success or failure, after previous attempts headed by then head of Fraunhofer ISE, Dr. Eicke Weber is being left at the door of the EU, specifically the European Commissioner for Energy, Miguel Arias Cañete.

SolarPower Europe expects to put its demands in front of Cañete, in January at the next Clean Energy Industrial Forum.

According to Aurélie Beauvais, Policy Director at SolarPower Europe, these demands include the relaxation of state aid laws, regulatory support to ensure finance for gigawatt-scale plants is available as well as access to land that comes at low cost.

Further support is wanted to ensure the plants have long-term low-cost energy and administrative burdens reduced wherever they apply that would otherwise hinder manufacturing growth.

“We have contributed significantly to creating the positive market environment for solar in Europe, our focus is now on delivering an industrial policy,” added Beauvais. “We had our first success this year by driving the process to see the Clean Energy Industrial Forum created by the European Commission. Now we have ambitious policy asks on the table and we expect our European policymakers to deliver.”

Campaign group, EU ProSun, which had led the successful call to impose the EU MIP rules on Chinese manufacturers selling PV modules in the EU, had fought a bitter battle with SolarPower Europe over tariffs and the subsequent MIP withdrawal in 2018.

EU ProSun had claimed support from the majority of PV manufacturers, including the largest European producer at the time, SolarWorld, which has subsequently gone bankrupt.

Adding to the collective European solar industry trade movement on manufacturing is expected to come from the ‘European Solar Manufacturing Council’ (ESMC), the formation of which was announced at EU PVSEC in September 2018. ESMC hopes to have all parts of the supply chain represented.

Andreas Bett, director of Fraunhofer ISE, and one of the founders of the Council, told PV Tech at the time that the European industry has many small enterprises and many have asked for an organisation that is pushing and supporting them in this way.

He described a “natural alliance” between the industrial leadership of business leaders combined with the continent’s various institutions and R&D outlets, that can help turn top results in research into products.

The fear for European research institutes that heavily rely on solar research funding in collaboration with the European solar manufacturers and supply chain has been its ongoing demise, limiting collaboration opportunities.

Milan Nitzschke, President of EU ProSun told PV Tech: “Never keep somebody from taking a turn to the better. During past years Solar Power Europe caused a lot of damage to EU manufacturers by repeating a hundred times that Europe doesn’t need to maintain the full manufacturing value chain. Obviously, this was a big mistake and I welcome SPE now changing its mind. Anyhow it’s far too simple to only ask for some public money and focus on supply-oriented measures. To regain faith in investing in EU manufacturing it is as important to establish a market that values highly sustainable, efficient and reliable solar products made in Europe. After having been fixated on cheaper and cheaper for years it is now time to bring back sustainability and quality into the EU PV market. France has done a good job here by starting with Carbon Footprint criteria. Other tools need to be developed.”

26 September 2022
The WCPEC is the world’s biggest platform for PV research and development, offering a unique possibility of international exchange by combining the three largest and most prominent international PV conferences: the European PV Solar Energy Conference (EU PVSEC), the Photovoltaic Specialists Conference (IEEE PVSC) and the International PV Science and Engineering Conference (PVSEC). In 2022, Europe has the honour to host the 8th World Conference on Photovoltaic Energy Conversion, interchanging the prestigious EU PVSEC for this year, that is being held annually for more than 40 years. After being in place for more than a quarter of a century, the WCPEC, being held every four years, is firmly established among the global PV community as THE event for the greatest minds and experts in various PV sectors to meet and discuss, to exchange and network! The conference programme is coordinated by the European Commission Joint Research Centre.
c-si manufacturing, eu commission, eu prosun, eu pvsec, pv modules, solar cell, solarpower europe