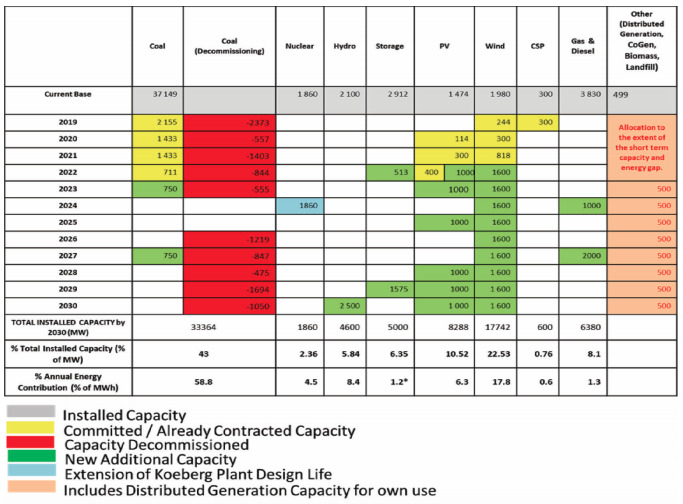 A decision by South Africa's Department of Mineral Resources and Energy (DMRE) to allocate 6GW of new large-scale solar over the next decade has been welcomed by the South African Photovoltaic Industry Association (SAPVIA) for giving a “moderate level of certainty” to the industry.

SAPVIA chairperson, Wido Schnabel added: “We will continue to engage the Minister of DMRE to find mechanisms to smooth out the gaps presented in 2024, 2026 and 2027, where no solar PV is envisaged to be added to the grid.”

The association also suggested that the IRP had not put forward the “least cost model”, but did accept that it provides potential PV developers, investors, operators and equipment manufacturers with a stable outlook in the medium term. It also welcomed openness from the government to amend the IRP over time to best suit the industry on the ground and it even forecast that an even larger renewable energy allocation could be in the wings.

SAPVIA COO, Niveshen Govender had several further requests, including expedition of the analysis required for the next version of the IRP, as well as speedy implementation of the Round 5 bidding window under the Renewable Energy Independent Power Procurement Programme (REIPPP).

“The waived requirement for ministerial deviation on 1-10MW SSEG [small-scale embedded generation] projects, and the allocation to embedded generation, based short term capacity and energy gaps, are great portents for the sector’s future,” said Govender. “We encourage the Department to swiftly gazette an amendment to Schedule 2 of the Electricity Regulation Act, thereby allowing for licensing exemptions for projects with a generating capacity less than 10MW.”

The IRP stated that coal will continue to play a significant role in electricity generation “in the foreseeable future” as it is the largest base of the installed generation capacity and it makes up the largest share of energy generated. The Plan called for new investments in more efficient coal technologies.

Small nuclear energy units were picked out as a more “manageable investment” when compared to a fleet approach. Meanwhile, natural gas plants would provide the flexibility required to complement renewable energy technology as it increasingly penetrates the grid.

For renewables, the IRP stated: “Solar PV, wind and CSP with storage present an opportunity to diversify the electricity mix, to produce distributed generation and to provide off-grid electricity. Renewable technologies also present huge potential for the creation of new industries, job creation and localisation across the value chain.”

Wind has come out as the favoured option with a significantly higher allocation than the other alternative energy sources. It will have 1,600MW allocated every year from 2022-2030 (14.4GW in total).

Energy storage is seen as another potential solution to the increasing levels of variable renewable energy generation coming online and tending to produce power at off-peak times. Storage was allocated 513MW of capacity in 2022 and 2.5GW in 2030.

The IRP detailed why it is necessary to impose building limits on renewables, claiming that it “smoothes out” the capacity allocations for wind and solar PV, which provides a constant pipeline of projects for investment and thereby addresses investor confidence. It also prevents erratic annual capacity allocations.

The IRP document can be found here.