Should the Suniva trade case proposals get approved, two thirds of the US solar pipeline expected to come online over the next five years could be wiped out, according to a new report from GTM Research.

GTM said that a new minimum price on imported crystalline silicon solar modules and a new tariff on imported cells would strike a “devastating blow”, sending “shockwaves” across all segments of the US solar industry with potentially more than 47GW of the downstream PV project pipeline being cancelled.

The trade case is now waiting for approval from the US International Trade Commission (US ITC) and then President Trump.

Cory Honeyman, associate director, US Solar at GTM Research, told PV Tech that the earliest the Trump administration could act on any import tariff recommendations brought via the US ITC would be mid-November this year, resulting in a four-year duration of tariffs between 2018 and 2021.

GTM's models for US PV deployment under the three scenarios were as follows: 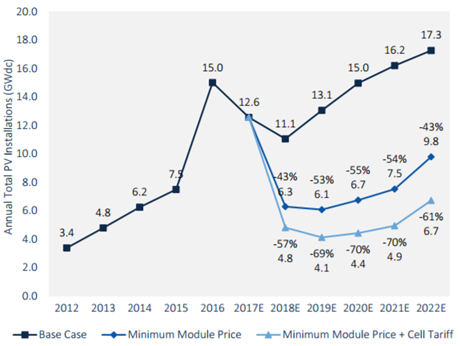 Utility-scale stands to be hit hardest with more than 20GW in danger of being cancelled.

Honeyman said: “Competitive, all-in EPC pricing for utility-scale solar is trending towards US$1/W at this point, so with a floor price on modules of 1.18 per watt, at top level perspective, you are effectively doubling the price of competitive utility-scale solar.”

Furthermore, the value proposition of solar in many states where PV has become cheaper than natural gas power, while also providing a good hedge against the volatility of wholesale pricing, would be effectively erased under both scenarios, said Honeyman.

“As utility-scale solar pipeline has been increasingly driven by markets where it is primarily enabled by its cost-competitiveness with natural gas the introduction of these tariffs makes the segment that much more exposed to a downturn compared to residential and commercial solar,” he added.

On the other hand residential solar would see the lowest impact, even though the 43 state markets at grid parity in 2021 would be reduced to either 35 or 26 states under the two scenarios. C&I solar would be more hampered due to challenging rate structures, while community solar would face more financing risks.

He added: “2022 is the first year you would see the market to continue to recover without tariffs in place.”

In terms of investor confidence, import tariffs could also create a “negative feedback loop” where a market unable scale would hold back the number of investors capable of dipping their toes in the water and scaling up their own presence in financing US solar, said Honeyman.

The US domestic solar and cell manufacturing capacity currently stands at just over 1GW, which is a “huge disconnect” from the record 14.6GW of solar deployed in the country last year, added Honeyman. There are also questions about whether existing domestic module suppliers can manufacture modules and cells at the price points required in the states that started to ramp up deployment just in the last two years.

Finally, Honeyman noted that there is still a lot of uncertainty over how the trade case will play out – commenting on the potential outcome: “You're guess is as good as mine.”

UPDATE: Suniva has confirmed that it intends to pursue a maximum tariff, including the cell component, of US$0.78/W.