What is driving the mass wave of solar manufacturer capacity expansions?

The China-based PV manufacturing industry has been in a massive capacity expansion phase since 2019. This intensified in the first quarter of 2020, but had eased off throughout the year and cumulative figures are jaw dropping, leading to real fears of overcapacity in 2021.

Those fears are compounded by market forecasts that paint a picture of only around 20% end-market growth in 2021, or total global installs in the region of 145GW to 160GW.

To put the cumulative capacity expansion announcements since 2019 into perspective with forecasted market demand in 2021, market demand would need to be in the 300GW range to achieve a reasonably balanced supply of PV modules to end market demand.

Using actual capacity expansion data, PV Tech’s analysis points to end-market demand needing to be in the 200GW range in 2021 to offset a period of overcapacity.

The PV industry has experienced several overcapacity periods in the last 10 years and arguably came close in 2019 and 2020. Yet, as the upstream manufacturing sector is undergoing its first major transformation (p-type mono large-area wafers and modules) and highly automated module assembly plants, cumulative old capacity is taken out of the supply chain.

Legacy capacity at the wafer, cell, and module level, which could have been as high as 80GW – 100GW back in 2018, is not a problem for a real-world overcapacity scenario in 2021. That capacity had started to come off-stream in 2020 as large-area modules began to take over.

Another change in recent years has been automation, notably in module assembly. As a direct result the capex and opex has reduced significantly, meaning that the financial impact of idling production lines to respond to a period of overcapacity is small.

Having significant overcapacity in the module assembly sector is almost meaningless today. The sectors that still need watching are polysilicon, wafer and solar cells.

The bottom line is that overcapacity during the current wave of manufacturing capacity expansions is not inevitable for the next few years without a major end-market demand slump.

This brings us to the main topic. There are only a few key reasons for the current (2019 – 2021) wave of capacity expansion announcements.

Predominantly, SMSL members have been the main driver behind actual capacity expansions rather than capacity expansion announcements. These companies have been gaining global market share for many years and high-efficiency products at mass scale resulting in lower cost per-watt has driven the Levelised Cost of Electricity (LCOE) to grid parity and beyond.

The key denominating factor in becoming an SMSL manufacturer is the significant gigawatts of manufacturing capacity compared to hundreds of rivals. The gap between a PV module manufacturer that ships 2GW of modules (2.5GW capacity) in a year may mean they are in the Top 20 list of leading suppliers, but the smallest ranked SMSL company would ship 5GW of modules and have capacity of over 6GW.

Therefore, a PV manufacturer that could be ranked tenth, would not be automatically be listed within the SMSL as the manufacturing capacity gap to the lowest-ranked manufacturer could in the multi-gigawatt range.

Coupled to the market share gains of SMSL manufacturers is ‘bankability’. As the leading global suppliers, especially to the largest market, being utility, bankability is the key metric. Not surprisingly, the PV ModuleTech Bankability Pyramid (shown below) has the majority of SMSL members in the top three ‘A’ ratings, and not manufacturers that could be in the Top 20 supplier rankings. 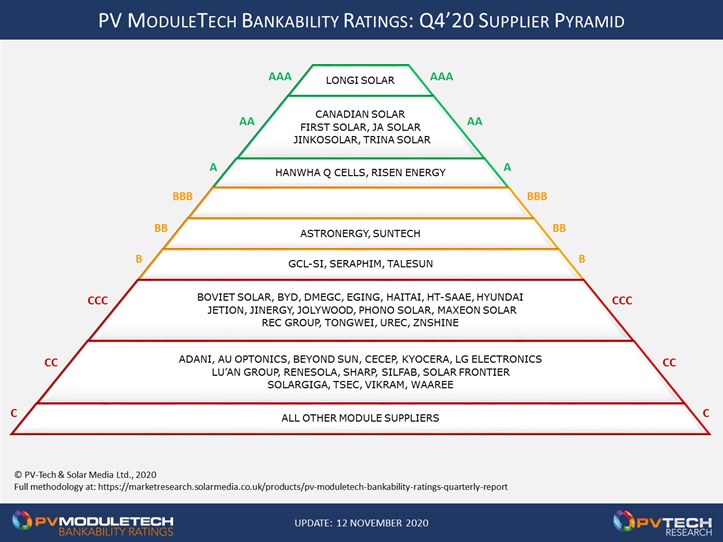 The second key driver to this wave of capacity expansions are predominantly other Chinese PV manufacturers either chasing the SMSL or simply being forced to build new facilities to keep pace with the high-efficiency large-area monocrystalline technology shift and build at gigawatt scale or lose competitiveness, even in niche markets and ultimately exit the industry altogether.

Within this second key driver we can include a number of manufacturers betting on gaining competitiveness with significantly larger (capacity) manufacturers in the second half of this decade with announcements made in relation to heterojunction and IBC and other next generation technologies.

These companies are often betting on a technology/efficiency competitive edge at an earlier timeframe than those within the SMSL, which will need to shift away from PERC but would have considerable gigawatts of legacy capacity, while these other companies not saddled with legacy capacity.

Of course, the last key driver is market demand. Many of the SMSL members would currently seem to be out of step with market forecasts. Some are very bullish on demand in 2021 and through the decade.

Key market demand drivers cited (in no particular order) include decarbonisation of industry, transportation and the demand for renewable energy to meet electric vehicle changeover.  Other market drivers include Green New Deals that are also being linked to post COVID-19 economic recovery plans. There are many more market drivers, but don’t forget grid parity has been an industry goal, one that is now achievable.

These market demand drivers have resulted in many companies, not least the major manufacturers, not only expecting huge growth in demand over this decade but actually planning and implementing capacity expansions, accordingly.

As shown in the table below, most of the current SMSL members have guided PV module shipments or various market research firms have provided their estimates for 2020 and 2021. 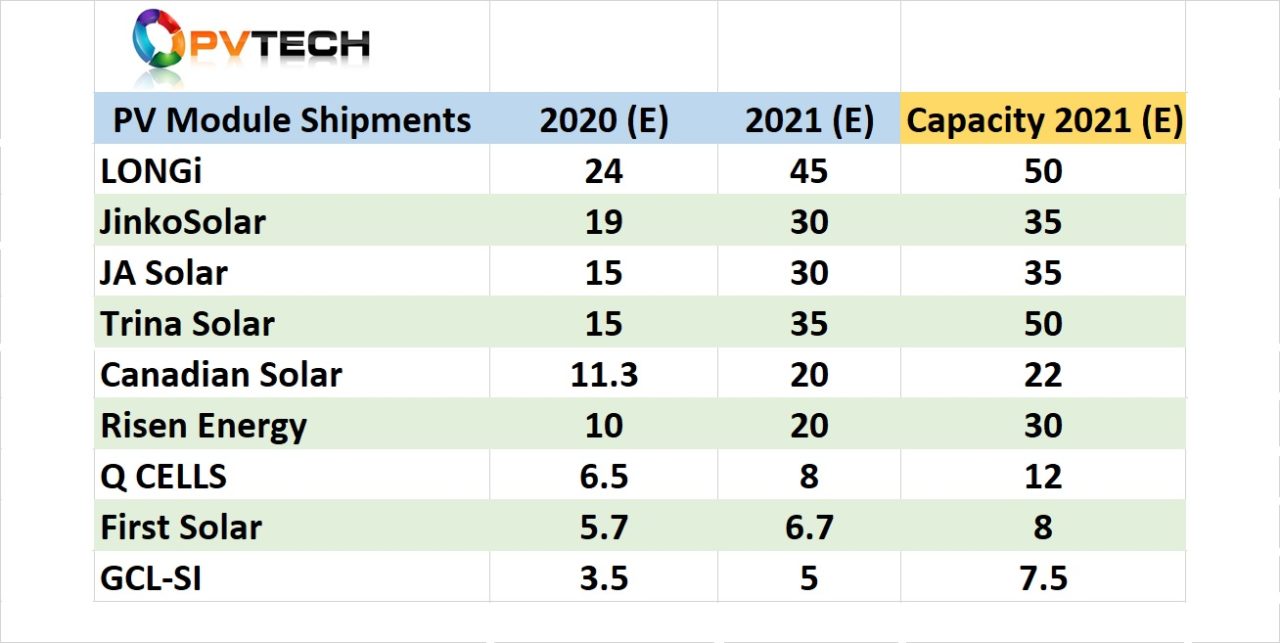 There are four SMSL manufacturers expected to exceed 15GW each of PV module shipments in 2020, led by claims from LONGi that it had already reached 20GW of shipments at the beginning of December 2020.

But looking at shipment guidance or market research firm estimates for 2021 shipments, clearly some of these manufacturers are expecting to double module shipments this year.

In the far right column we have added in estimates for PV module manufacturing capacities that could be achieved by these SMSL members before the end of 2021, indicating the near-term bullish market positions these companies have.

So, instead of fearing the industry is heading into overcapacity, perhaps it’s time to get worried about meeting demand?