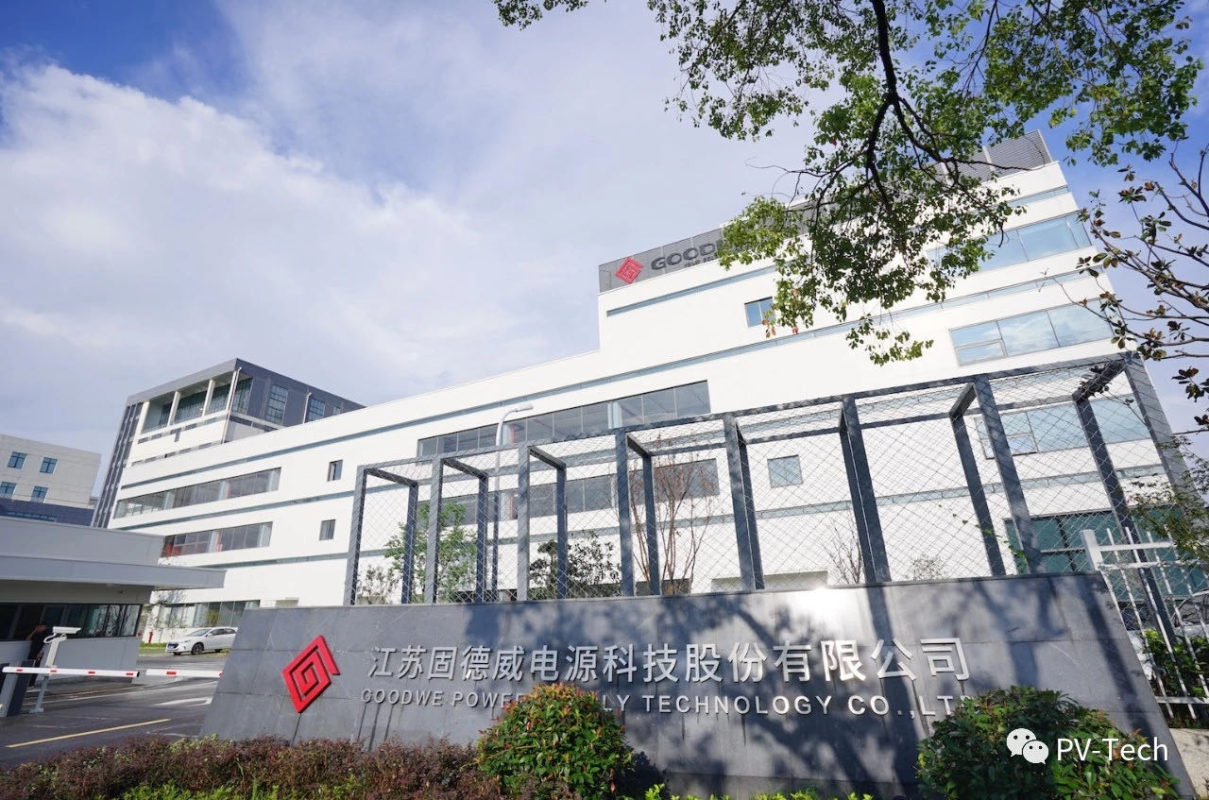 PV Tech's Carrie Xiao meets with Shen Rong, vice president of GoodWe’s International Sales Center, for an exclusive interview on the company’s global market strategy and its latest developments. At the same time, he shared his thoughts on recent industry developments and manufacturing trends.

PV Tech: In the last six months, GoodWe has accelerated its outbound activities, attending exhibitions in South America, Mexico and India in quick succession. What’s the role of the international market for GoodWe and what plans does the  company have for overseas markets?

Shen Rong: GoodWe has a clear-cut market strategy. Since the early days, overseas markets have been a major playing field for us, as well as for many other mainstream PV companies. At that time, PV was only a small industry sector in China, so we were trying to become involved in specific regional markets like Australia and the Netherlands. Later, GoodWe grasped the opportunity of China’s push for large-scale PV rollouts and succeeded in taking a leading role in the distributed residential market.

Doing business in one single market is not a recommended strategy. Keeping this in mind, GoodWe has been developing more detailed global plans. Our business has now extended beyond Australia and the Netherlands to reach India, Germany and South Korea.

Two years ago, we made up our mind to be among the global top five in the following three years. Bloomberg and Wood Mackenzie are currently ranking us 7th worldwide, while we were listed 4th in a recent three-phase inverter ranking report published by IHS. We hope to move into the top three in the near future.

PV Tech: Which countries are GoodWe's key markets and why have you chosen to prioritise them?

Shen Rong: A solid globalisation strategy prompted GoodWe to set up offices on almost every continent. In Germany we have a team of nearly 10 solar professionals to serve the entire European market, including Italy, Spain and some East European markets. We also have branches in Britain, Turkey and South Korea. We are additionally running our own sales and service team, serving the Brazilian, Mexican and South African markets and are continually looking to improve our operations in all these markets.

We have opted not to enter the US market for the time being because of certification issues, but we have been actively promoting our products and establishing sales channels there. I believe we will obtain the necessary certifications to enter the US next year. GoodWe is committed to worldwide development of the solar industry and is determined to be listed among the top three PV inverter companies in the world.

PV Tech: What have you achieved up to now in overseas markets, taking 2018 as an example? And what about overseas performance compared to the domestic sector?

Shen Rong: In 2018, we both reinforced our position in several traditional markets and carried it further. For example, we are already the number one Chinese manufacturer in terms of shipments in Australia. We are also the number one in sales there. Already a leader in energy storage, GoodWe is now actively expanding into C&I.

We have made new breakthroughs in larger ground-mounted utility plants in the Netherlands. Our performance in India is impressive as well. Our local investment partners include Tata and Sterling & Wilson. GoodWe has participated in India's Cochin Airport project and a number of local railway station installations ranging from 20MW-30MW.

The company is also moving fast in other emerging markets. For example, in Italy and Spain we’ve started from scratch and our products are enjoying increasing popularity. Also in Brazil, starting as an OEM, GoodWe has now established its own customer base.  2018 was a transitional period for GoodWe in that country and, during that year, the company built a strong local team that has been expanding its network and delivering outstanding results. The overseas business of the company in 2018 increased by more than 60% compared to 2017.

Shen Rong: Before 2018, the domestic market made up 70% of the company’s total sales while the overseas market accounted for 30%. The information is not complete as 2019 is not over yet. I guess the proportion might be reversed this year, with 30% -40% domestic and 60%-70% overseas.

PV Tech: What is your expectation of performance in overseas markets this year? For example, shipments or profit estimates?

Shen Rong: It is not the right time to evaluate the whole year’s business performance as we are still adding the final touches. I estimate overseas orders this year may have doubled.

PV Tech: What are the reasons behind the reversed proportions? It is clear that the Chinese market has shrunken significantly since the 531 policy release. Was it a timely adjustment or was it a planned step in overseas markets?

Shen Rong: I think both. GoodWe is always planning ahead because we are fully aware of the danger of staying in one single market. Even in a market as large as China, it will still be risky if the Chinese market share topped 70%. We are strategically better positioned thanks to these early moves and our experience in overseas markets.

These proactive actions were well received. Our overseas business expanded considerably in 2018 as a result. The unexpected domestic market shrinkage, the very reason for the reversed proportion, had disrupted markets both at home and abroad.

PV Tech: In your opinion, what’s the difference between the international and domestic market? Would you please talk about difficulties and trade barriers in your venture into these new markets？

Shen Rong: I think policies governing the domestic market will endure for a long time. PV players of mixed performance are prone to wage price wars, which will lead to blind competition.

Competing on price is in fact at odds with GoodWe’s business philosophy. Always pursuing good quality and excellent craftsmanship, GoodWe is sometimes forced to confront irrationally low prices offered by our competitors. Such pressure is a boost somehow, propelling us to weigh heavily on cost-effective supply chain and products.

International markets vary greatly. Historically exposed to European and American brands, most countries in Europe, the US and even some countries in South America are placing a priority on product quality and performance. This is where our strength lies. GoodWe’s strategy abroad is to offer quality products and never engage in price wars of any sort.

While being praised as the most cost-effective brand in Europe and America, GoodWe is also the high-end choice in the Chinese domestic market.

PV Tech: International competition is intensifying because everybody is going overseas. What has distinguished GoodWe from its competitors at home and abroad? What marketing strategy have you adopted?

Shen Rong: I am a firm believer in the competitiveness of GoodWe products. Featuring very low failure rates and stable performance, the rate of complaints is very low. I am confident that GoodWe is capable of establishing itself permanently in many countries.

Our technology and R&D capabilities are widely recognized. Boasting an R&D team of over 200 engineers, the company has established research centers in Suzhou, Shenzhen and Australia. Some of our products can even outrun foreign counterparts in overall performance. R&D, testing and production are the pillars underpinning GoodWe operations. We are not opportunists. All our products meet local standards.

It takes time to build up a brand. GoodWe chooses to engage local companies for overseas promotion and marketing. It is my view that GoodWe needs to work with like-minded people. Therefore, we are very selective with our partners, who must fully endorse GoodWe’s value and product concepts. GoodWe will not approach those who are crazy about playing low price games.

Our strategy this year can be best summarized as excellence in residential markets, tapping into C&I, spearheading storage and making a breakthrough in ground-mount solar utilities.

PV Tech: You've mentioned intelligent monitoring. Are you developing software by yourselves? Why is this important?

Shen Rong: Yes, all research operations are performed in-house, by our own team. GoodWe has a monitoring team integrated by 40 specialists in China and an R & D team of 30 researchers in Australia. Building R&D strength takes time, but it is the critical element for both large ground-mount utilities and smart energy projects.

Of over 1.5 million inverters shipped so far, around 360,000 have already been connected to the SEMS system. What GoodWe provides is a real-time intelligent monitoring platform closely tied to its smart home and smart C&I systems. In other words, we are fully prepared from both a hardware and software standpoint.

In the future, GoodWe will be participating in the development of a broad smart energy network and, to that end, we are already working to develop new software and hardware capable of supporting that system.

PV Tech: GoodWe has recently relocated to a new factory, which integrates R&D, production and sales. What’s the significance of this new factory to the company?

Shen Rong: Our new factory was officially launched after the release of the 531 policy. I still remember the managerial discussion on whether to go or to stay.

The management is optimistic about the future market development and also believes in GoodWe’s potential, so even in hard times, we still chose to go ahead with our plan of building a new plant. This is an unmistakable sign of confidence in the future of the industry and the company in particular.

Our new factory and the Guangde factory in total reach 12GW, enabling a whole range of supply to meet a diversified global demand. These two factories will also provide a strong support to GoodWe´s rapid development in the next few years.

GoodWe's new headquarters is located at No. 90 Zijin Road, High-tech Zone in Suzhou City, only 2 kilometers away from Shishan central business district. The new factory covers an area of 35 acres. Securing a site at the heart of the city illustrates the strong support of the local government to high-tech enterprises. In the future, we are expecting more talent to join us.

PV Tech：What’s your expectation of the global market next year?

Shen Rong: Looking at the bigger picture, I think overseas markets will continue to thrive next year. For example, European markets are recovering and keep benefiting from favorable policies. This expansion is fuelled by the fact that the price of PV power is becoming increasingly competitive. In many countries, PV power has surpassed conventional fossil-fuel power sources. Electricity tariffs, for both the residential and commercial sectors, continue to increase in many countries and this is also a very important driver behind the development of the solar industry. Although the situation in China is the opposite, it is our judgment that the distributed residential segment will continue to soar up despite a continuous price drop.

We are also very optimistic about GoodWe's future. The same rapid development continued into 2019 from 2018, attracting a large number of potential customers, many of whom are global giants. The diversified production lines will facilitate our entry into new markets, creating room for further development. GoodWe is preparing to launch an IPO this year in the Chinese stock market and we are confident that this will mark another giant leap forward in the company’s development.