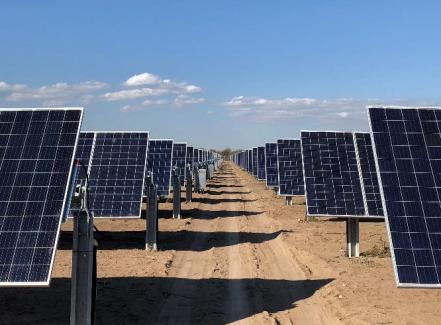 A joint venture (JV) between Total and EDF Renewables has secured US$165 million to finance the construction of a 450MWp solar project in India.

Eden Renewables India has closed financing for its SECI III solar PV project from DBS Bank, Standard Chartered and the Singaporean branch of Sumitomo Mitsui. The project is under construction in Rajasthan, northern India, and is due to be completed in the first half of this year.

The JV between the two power companies has installed around 207MWp of solar capacity in India, with a further 450MWp under construction, and 1.6GW its development pipeline.

The SECI III project was awarded to Eden in a tender launched by the Solar Energy Corporation of India (SECI) in 2019, which lead to a power purchase agreement (PPA) between the two entities. The company cemented its status in India’s solar market last October after it picked up around 1.35GW of new-build solar in SECI’s eighth and ninth tenders. Before this, the JV had secured JV 25-year PPAs for four projects in northern India over the summer.

The JV’s chief executive, Sudhir Verma, said the project would help the Indian government to meet its target of taking 40% of its energy supply from renewables by 2030. Verma said that Eden’s management team are “eager to provide our expertise in high scale solar PV farms to contribute to a low carbon environment” in the country.

Eden was advised by London law firm Herbert Smith Freehills on the funding round for the SECI III project, with Chatham Financial Europe placed as hedge benchmark adviser.

Frédéric Belloy, executive vice president of international operations at EDF’s Renewables arm, said that securing financing for the plant marks a “major step” towards its launch onto India’s energy market.

“We are now fully mobilized towards its completion. SECI III, as well as our recent successes representing 1,300 MWp new projects, demonstrate EDF Renewables’ willingness to support India to reach its great ambition for renewables energy.”

Having founded Eden with EDF in 2016, the renewables arm of oil and gas company Total has increased its presence in India’s renewables sector again this year. The company recently bought a 20% stake in Indian PV developer Adani Green Energy Limited (AGEL) in an effort to reach its global clean energy targets.

Laurence Juin, chief financial officer of Total Eren, said the Indian renewable energy market “offers a high growth potential and we are determined to provide an electricity which is both sustainable and low carbon, in line with the Indian Government’s objective to increase the part of renewables in India.”

India’s downstream solar market is expected to rebound this year after being set back by COVID-19 restrictions and project delays. Indian utility Gujarat Urja Vikas Nigam Limited (GUVNL) has auctioned 500MW of PV capacity earlier this week, with winning bids setting a record for the lowest solar tariff seen in India at INR1.99/kWh (US$0.0269/kWh). Prime Minister Narendra Modi recently said he expects the country’s renewables capacity to reach 220GW by 2022, higher than the initial 175GW target set out in October 2019.