Around the world solar developers are turning array designs on their head and choosing to go east-west instead. Following on from a recent feature in PV-Tech Power volume 14, here are the five key considerations to bear in mind when designing an east-west array.

Getting more bang for your buck

Solar arrays that are situated east-west can squeeze in more rows and panels – and therefore a greater generation capacity – than their south- or north-facing cousins. Cleve Hill Solar Park Ltd, a joint-venture comprising solar EPCs Hive Energy and Wirsol, adopted that approach when designing the 350MW+ Cleve Hill solar farm situated on the UK’s south coast in Kent.

The developers now expect to fit more than 1 million panels onto the 400-hectare site. “We just realised how much more we could get on the site for an east-west layout,” Hive’s Hugh Brennan said. The similarly-designed 300MW Cestas project in Bordeaux, France, uses just 0.8 hectare of land per megawatt of solar generation capacity.

While east-west solar arrays may have a reduced total output, the value of the electricity they produce is inherently higher in most markets. This is a result of the smoothing of the array’s generation curve, generating more electricity during the morning and evening hours and less during the midday peak when electricity is at its cheapest. Research conducted by Sheffield Solar using 1kWp systems found that east-west systems generated 15% less electricity than those facing south. 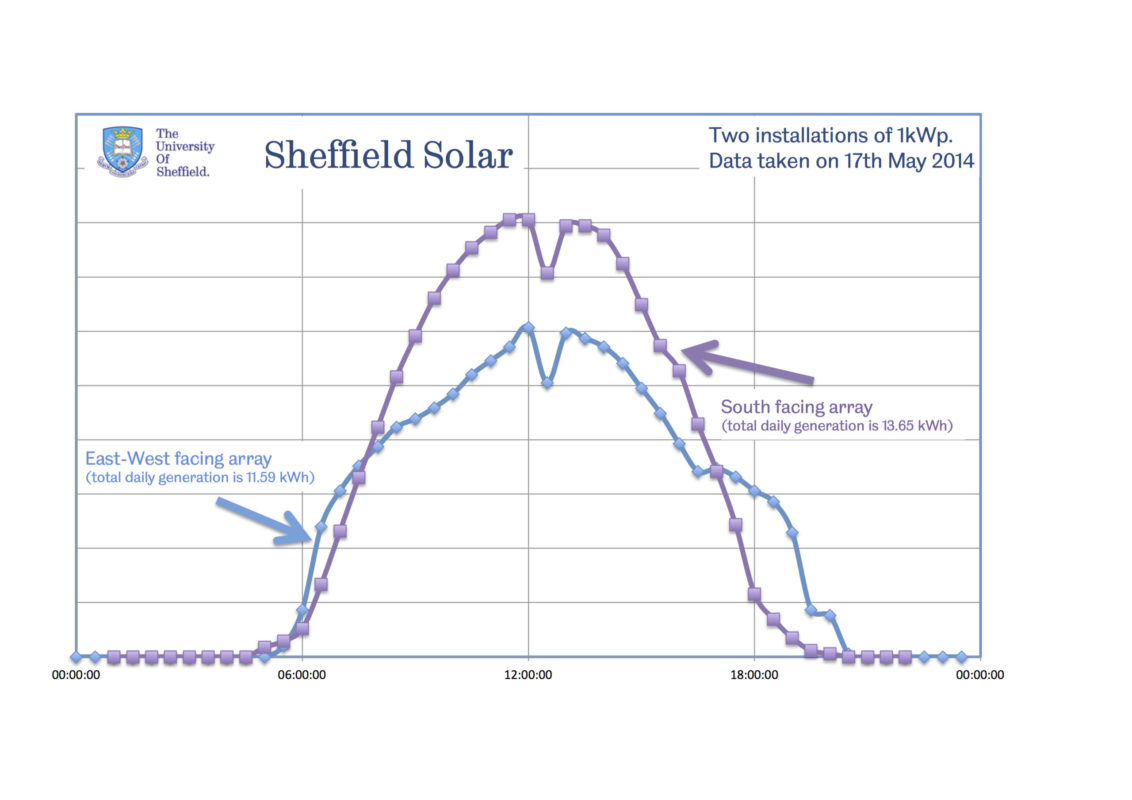 Problems with the model

Another unintended quirk of east-west arrays is the difficulties posed to modelling software. Design and modelling software uses global horizontal irradiance figures, usually supplied by meteorological stations, which are then transposed onto the inclined plane of the modules to forecast production.

But this has a tendency to fall down when used to calculate east-west production due to the transposition, as Sheffield Solar’s Jamie Taylor explains: “When you do that for an east-west system, it's not particularly accurate because the bulk of the methodologies for conducting that transposition have been developed for south- or north-facing arrays. They tend to break down as you move towards east-west systems,” Taylor says.

One of the more interesting effects, and one that doesn’t immediately spring to mind, of east-west orientated arrays is how systems of that design impact on what’s happening beneath the panel. As the rows are packed in more tightly and in a convex manner, the frames and panels often create roof-like structures that block natural light and rainwater from reaching the ground underneath. As such, Cleve Hill Solar Park Ltd has had to enlist expert researchers in the UK to put together detailed environmental impact assessments analysing light and water levels, soil content and more.

If the shoe fits

East-west orientations will be perfect for some prospective projects. Cleve Hill Solar Park Ltd landed on the design after months of calculations and forecasts ultimately proved it would be more economical for the site. However the land was originally intended to be a traditional south-facing solar farm earmarked for the UK’s Contracts for Difference renewables auction mechanism and only switched after the scheme effectively closed to solar in 2016. Other subsidy-free projects, such as the one INRG are proposing for Scunthorpe in the UK’s north, are being designed south-facing to maximise their grid connection agreements. It will, as ever, be a case of whichever design best fits the site’s characteristics.

To read the full version of this feature investigating the application of east-west solar designs, download you free digital copy of PV Tech Power volume 14, here.