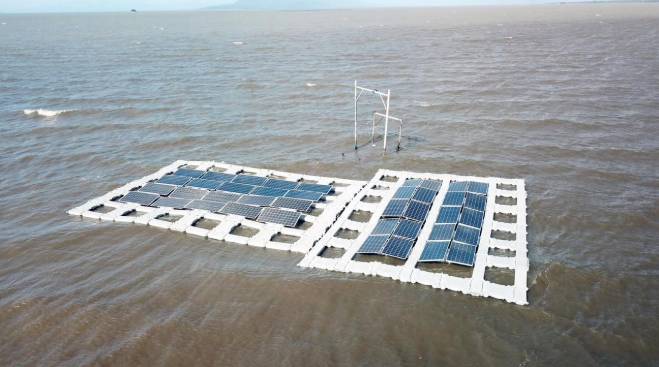 The Philippines' first and biggest floating solar (FPV) testbed, which is under construction in Southeast Asia's third-largest lake, aims to demonstrate how the technology combined with a screw piling method can withstand typhoons in a region that has on average 20 storms each year.

Filipino renewable energy developer SunAsia Energy recently completed the first segment of this 20.5kW floating PV testbed that is owned by its subsidiary NorteSol Energy. The system uses modules from Chinese manufacturer Trina Solar, with half the plant using aluminium-framed panels and the other half frameless panels. More modules from other manufacturers will also be tested in a second phase.

The project is located on Laguna Lake, 55 kilometres south of the business district of Makati City, which is part of the huge Manila metropolis, on the northern island of Luzon.

Theresa Capellan, president of SunAsia Energy told PV Tech that the results of the testbed would be shared at a floating solar conference in June – adding: “We will scale up to utility size FPV as soon as the testbed yields a favourable outcome, which we are optimistic about.”

The Laguna Lake natural water resource covers 95,000 hectares and crosses several cities and towns. Last December, NorteSol Energy signed an agreement with the Laguna Lake Development Authority (LLDA) to pilot FPV solar in the lake and study its engineering and operational feasibility, particularly during the typhoon season from June to September.

“Laguna Lake is a challenging location for a floating PV solar because of its waters, winds and waves. We know that storms visit the Philippines 20 times a year, on average,” said Karlo Abril, project officer of SunAsia Energy.

Abril explained that in Japan and Taiwan, FPV plants tend to be bolted on the water surface to ensure stability from strong waves and gusty winds during the typhoon season. Whereas, SunAsia Energy has introduced a screw piling method in the Philippines as its anchoring solution in anticipation of strong storms.

Various aspects of the plant will be tested including the Trina Solar modules, looking at the effect of aluminium frames, among other materials, on water surfaces. SunAsia will also be using advanced sensors to record weather movements, track wind speed, tag wave fluctuations, and monitor water quality changes.

“Experience in Singapore and Vietnam reveals that the greatest advantage of floating solar is its cooling effects to the waters,” Capellan added in a release. “Solar panels on waters reduce evaporation during summertime, increase oxygen levels, and improve the overall water quality of the lake’s fishing grounds. This implies that FPV solar can help increase fish population as cooler waters increase zooplankton making it easier for fish to find food as well as reproduce.”

SunAsia is already well established in the Filipino renewable energy space having one of the largest utility-scale PV plants in Toledo, Cebu, and what it claims to be a first-of-its-kind microgrid system in San Jose del Monte, Bulacan.

19 July 2022
Free webinar - Hear an updated and live talk that was first delivered by PV Tech's Head of Research, Dr Finlay Colville at the PV ModuleTech conference in Napa on 15 June 2022: - The PV industry has moved beyond its legacy supply/demand dynamics: why has this happened? - ASPs can’t go down globally in the near to mid-term: why is this the case? - Is there new capacity coming to the rescue? - Has China’s polysilicon industry become a new PV pricing cartel? - Making products & deploying domestically in a TW annual landscape: how can the U.S. really do this in practice? - The real PV technology roadmap: why do only 2% of producers matter today?
aluminium, floating solar, fpv, frameless, laguna lake, luzon, module testing, nortesol, philippines, sunasia, trina solar