These new specifications have destabilized the marketplace. The wafer world, silenced for five years, is waiting for another wave of changes in future.

That will be a revolution running through the whole PV supply chain, covering wafers, cells, modules upstream and the power plant sector downstream.

LONGi CEO Li Zhenguo said that: “The market competition is getting increasingly fierce, that’s why we decided to change wafer size. Some companies altered the design because of limited progress with conversion efficiency improvements. I think that if every maker has different ideas on wafer size, that will harm the whole industry.”

His words remind us of the wafer size standardization movement led by a handful of PV companies five years ago.

The mono wafer specification is in a state of chaos since 2013. Different sizes hindered upstream and downstream interconnection and the whole supply chain has suffered as a result.

After the release, it took six quarters to complete the standardization process. Li Zhenguo recalls: “Korean companies reacted the quickest to these new standards, followed by domestic makers. Germany and Japan had questioned the standards at some point but finally, at the end of Q2 2015, the world reached a consensus on mono wafer size standards and these standards were included in the CMI International Standards Directory in August 2017.”

At that time, M2 wafers could boost module output by 5Wp or more without increasing the overall size of 60-cell modules. Such a significant improvement in cost per Watt had enabled M2 to be listed among the mainstream products and it stayed on top for many years to come.

Five years later, the industry is moving forward at an unexpected speed. What will M6 grow up to be in this context?

Tool limits mean the 166 era is here to stay

This time LONGi set the standard wafer size at 166mm and publicized the price of M6 mono wafers (RMB 3.47 per piece, US$0.49), showing its intention to the world for a powerful push of M6.

From the perspective of production line compatibility, market needs and product reliability, large wafer production is one of the main routes guiding PV industry in 2019. The key lies in the choice of wafer size amid technology innovations.

Li Zhenguo says: “We’ve designed the wafer size out of multiple considerations. For example, the impact of changes in module and glass. Also, we have inspected old cell production lines over 100GW to check their compatibility with size changes. The research results all point to 166mm.”

In the eyes of all, LONGi once again spearheaded the industry with its choice and bold promotion of 166mm wafers.

Shen Wengzhong, director of the Solar Energy Research Institute at Shanghai Jiaotong University, says: “M6 wafers have already reached the size limits of certain equipment. If you still want to enlarge the wafer, you need to re-purchase some equipment. However, cost reductions enabled by the enlarged size will be offset by the increased cost of re-purchasing new equipment.

“Compatibility with existing equipment is a decisive factor for setting up the upper limit of wafer size. We’ve analyzed the main production equipment used for slicing and cell/module processing. It can be concluded that the existing mainstream equipment can accommodate M6 wafers. This specification can be regarded as the possible upper limit for existing equipment.”

In other words, it is difficult to raise wafer size standards in the near term. M6 will remain the upper limit for a long time to come.

Wang Yingge, assistant to LONGi Solar’s CEO, says: “Hi-MO4 modules will be available in volume in the third quarter of this year. By the end of 2020, most of LONGi’s cell and module capacity will be shifted to 166mm.”

LONGi’s M6 wafers and Hi-MO4 modules have both attracted the attention of third-party analysts. Wang Ge, chief analyst of power equipment and new energy of CITIC Securities Research and Development Department, analyzed in his report the driving force behind the large wafer rush. “Using large wafers and high-efficiency modules can reduce the cost of racks, combiner boxes and cables, dilute the system cost per Watt, bringing a premium to modules. In the manufacturing sector, large wafers can help reduce non-silicon costs related to wafer, cell and module during production to directly boost profits in each section.”

Overall module output is enhanced ten years ahead of schedule

While the manufacturing sector is hesitating over the choice of wafer sizes, power plants are more than willing to take what’s on offer. Grid parity pressure on terminal power plants requires module output to reach 400Wp or more.

On the issue of weight and cost increase arising from enlarged module surface, Arctech Solar CTO Wang Shitao says: “Modules are getting larger. The increase in load, module fixing, spindles and columns is leading to the rise of rack costs as a result. It is not a linear process anyway. The control meter transmission cost however remains almost the same. If module output is increased by more than 25%, the unit cost of tracking system will be reduced by around 15% and these changes are compatible with existing wind tunnel tests.

“It is shown in the M6 module specification that there are barely any changes in the number of 1500V and 1000V string modules, rendering a significant reduction in the unit price of trackers.”

TBEA has been using 72-cell large modules since 2012. It also measured 310W-430W modules and found out that power cost per Watt is reduced by a large margin with the rise in module efficiency and output. BOS cost has also been reduced. The total cost is reduced by RMB0.0013 cents with every 5W module output increase.

Zhang Shengzhong, chief engineer of TBEA Xinjiang New Energy Co.,Ltd, says: “The output of 156.75 cell P-type module is around 385-390Wp. The output of LONGi’s large module has reached 425-430Wp. According to the International Photovoltaic Technology Roadmap (ITRPV), 425Wp will not be realized until 2019 for 156.75 p-type modules. LONGi is ten years ahead of the schedule, which has a huge impact on PV power cost per Watt.” 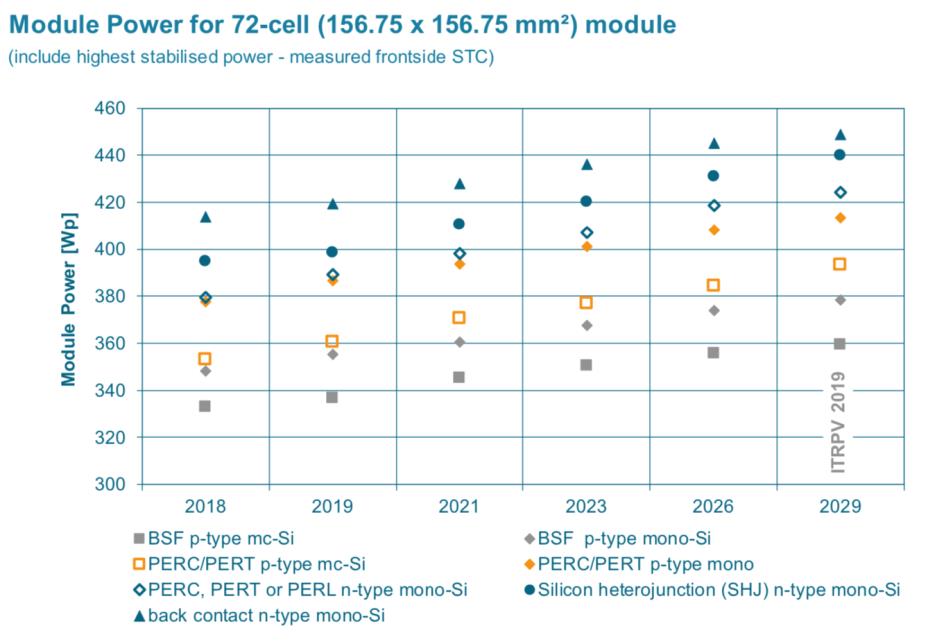 In addition to TBEA, mainstream PV companies such as Aiko, Risen and Chint are all promoting 166 modules. Many overseas projects have adopted 72-cell modules and LONGi’s Hi-MO4 module using M6 mono wafer will soon be launched in the global market. According to LONGi, potential module orders have already surpassed 2GW globally.

August 30, 2022
Tongwei Solar, EGing PV and LONGi have been shortlisted as candidates for the fifth module procurement round of Hong Kong energy company China Resources Power.