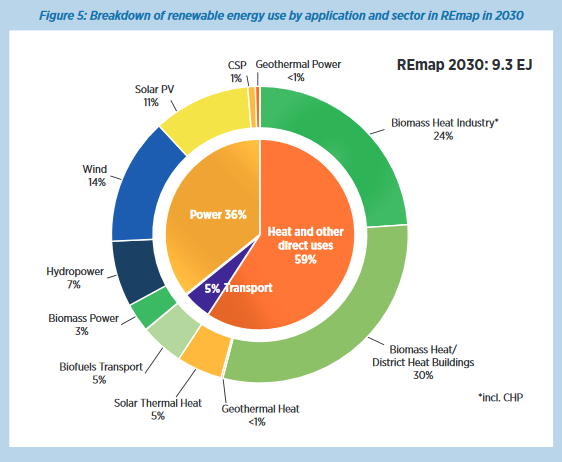 India could become the fourth largest market for renewable energy in the world by 2030 with 25% renewables in its energy mix, according to a new report by the International Renewable Energy Agency (IRENA).

The study ‘Renewable energy prospects for India’ picked out solar as having a key role to play becoming the country’s second largest source of renewables generation by 2030 with a 16% share, followed by wind (14%) and hydro (7%). Biofuels, often overlooked in the media discussion of renewables, were tabbed as having a huge 62% chunk of the total renewables capacity due their ability to be used in multiple applications including transport, electricity generation and heating.

The report noted that increasing deployment of renewables would result in 12 times more savings for the economy than its costs by 2030, combined with other benefits in job creation, health and environment. IRENA cited studies indicating that India could have over a million jobs in solar energy and over 180,000 in wind energy just by 2022. But to achieve this, India urgently needs to address and training and skills development shortfall.

The projected renewables additions would also lower the demand for coal and oil products between 17-23% in the same period.

However, IRENA noted that investment in renewables needed to be scaled up significantly and to do this mobilising affordable financing and adapting new business models will be essential.

IRENA director-general Adnan Z. Amin said: “With one of the world's largest and most ambitious renewable energy programmes, India is taking a leading role in the energy transformation both regionally and globally. India possesses a wealth of renewable resources, particularly for solar and bioenergy development, which can help meet growing energy demand, power economic growth and improve energy access, as well as boost overall energy security.”

India’s total gross power capacity will more than double from 284GW in 2015 to an estimated 670GW by 2030, while electricity generation more than triples from 1,100TWh per year to over 3,450TWh per year. However, more than three-quarters of this new production is to be met by new coal-based capacity, under current plans.