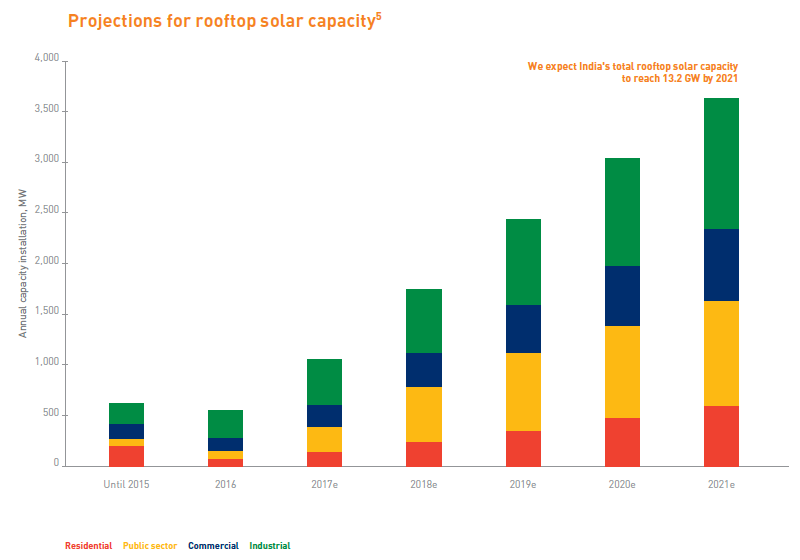 India reached 1,396MW of rooftop solar deployment at the end of March, with nearly half (678MW) of this installed just in the fiscal year 2016-17, according to the latest ‘India Solar Rooftop Map’ from Bridge to India.

The success of the last 12 months marked year-on-year growth of 81%, with an expected y-o-y growth of 76% in the current financial year and the surpassing of 2GW total deployment. The current year’s growth will be driven by ongoing and recently completed rooftop solar tenders. The public sector will also see an impressive 205% growth during this period.

In terms of states in 2016-17, Tamil Nadu, Maharashtra, Rajasthan, Gujarat and Karnataka accounted for 40% of total rooftop solar capacity addition in the country.

The leading rooftop developers in 2016-17 were CleanMax, CleanTech, Azure, Amplus and RattanIndia. Meanwhile, Delta and SMA (including Zever) held 60% market share in rooftop solar inverters in that period.

EPC costs for rooftop fell by 19% over the year and the OPEX market, where a third-party developer owns and installs the solar system on customer’s roof, also grew 122%.

Solar Energy Corporation of India is also tendering for a huge 8MW of rooftop PV at a Varanasi university. Even a Delhi distribution company is showing strong intentions to promote rooftop solar.

Another report has suggested that the rooftop segement could create a 125,000 army of rooftop installers in the next five years.