Updated: India’s Ministry of Finance has imposed a 25% safeguard duty on imports of solar cells and modules from Malaysia and the People’s Republic of China, starting tonight.

All levels of the duty will be imposed “ad valorem minus anti-dumping duty payable, if any” when imported during the relevant period, said the Gazette of India notification.

The notification stated: “Nothing contained in this notification shall apply to imports of subject goods from countries notified as developing countries vide notification No. 19/2016-Customs (N.T.) dated 5th February, 2016, except China PR, and Malaysia.”

The Indian solar industry currently sources more than 90% of its cells and modules from China and Malaysia.

However, last week, major Indian PV developer Acme Solar received a stay order from the Orissa High Court regarding the imposition of the safeguard duty.

Further checks have indicated that Thailand and Philippines would also be classified as developing countries and therefore excluded from the duties. This would assist companies such as leading 'Silicon Module Super League' (SMSL) member JinkoSolar, which has a major manufacturing operation in Thailand.

A number of Chinese PV manufacturers and other foreign suppliers have production operations in Indonesia and Vietnam, enabling them to supply solar products in India, without the import duty.

LONGi is investing US$309 million, including around US$240 million in constructing a new facility with an initial nameplate capacity of 1,000MW of monocrystalline solar cells and expand its mothballed 500MW module assembly plant to 1GW.

Given the slim margins for suppliers into the Indian market, the exclusion from the safeguard duties could be a major competitive advantage over the next two years of the duties being imposed. 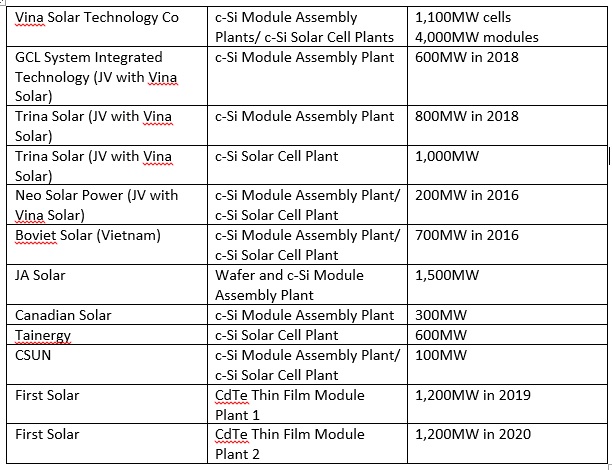