PV Tech’s analysis of ‘Solar Module Super League’ (SMSL) member JA Solar’s capacity expansion announcements in the first nine months of 2020 have revealed the company has already announced a total of over 104GW of combined plans, including ingot/wafer, solar cell and module assembly.

Just before completing this analysis, leading SMSL member JinkoSolar stunned the industry by confirming it had completed a 9GW expansion of module assembly capacity in the first half of 2020. This was intended to be completed by year-end and would extend assembly capacity to 30GW, a 90% year-on-year increase by the end of 2020. Full analysis of JinkoSolar's news can be read here.

Trina Solar has since updated its capacity expansion plans from targeting module assembly capacity reaching at least 39.5GW in 2022 to 50GW by the end of 2021.

Not to be left out, JA Solar had a number of capacity expansion projects ‘under construction’ by the end of 2019, which the company reported in its first annual report after re-listing in China. PV Tech estimated that these plans would all be completed and operational in 2020.

The manufacturer is believed to have exited 2019 with in-house nameplate capacity of 11.5GW of ingot/wafer production, followed by matching capacity for solar cells and module assembly of around 11GW. Putting this in perspective, JA Solar’s PV module shipments in 2019 were reported to be 10.26GW, a record annual shipment figure and the first time the company had surpassed the 10GW milestone for annual module shipments.

The first capacity expansion plans to ramp in 2020 included around 2GW of ingot/wafer, 2GW of solar cell expansions and over 5GW of module assembly expansion plans. These were mainly in China but also cell and module expansions at its Malaysian facilities.

As a result, JA Solar was expected to end this year with in-house ingot/wafer nameplate capacity of approximately 13.5GW, solar cell capacity of around 13GW and module assembly exceeding 16GW. 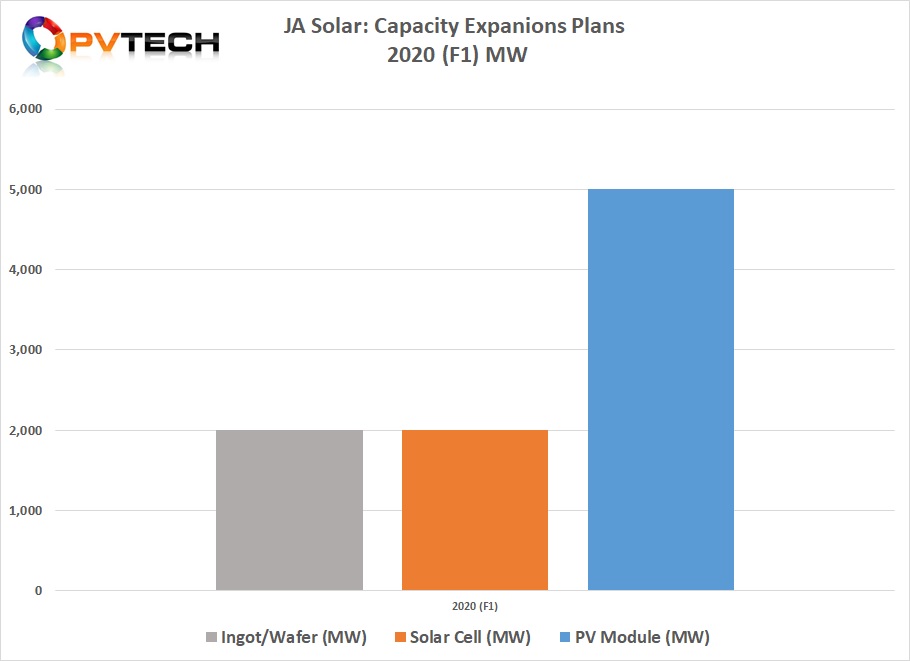 However, in the first two months of 2020, JA Solar announced a second wave of capacity expansion announcements. These included plans for a 5GW cell production facility (soon after doubled to 10GW in March) as well as a 10GW module assembly plant.

The newbuild projects were said to require capital expenditure of around RMB10.2 billion (US$1.5 billion). Importantly, these expansions were said to be planned over a four-year period with the initial phase comprising a 5GW expansion of solar cell capacity and 5GW of module assembly expansions. Phase I is expected to be in production by the end of 2021. Phase II will be completed and start ramping sometime in 2023.

JA Solar also announced a complete re-tooling of idled workshops for 2GW of wafering equipment (Diamond Wire) at a plant in Ningjin, China costing around US$ 9.8 million and only taking around three months to complete and start ramping production. 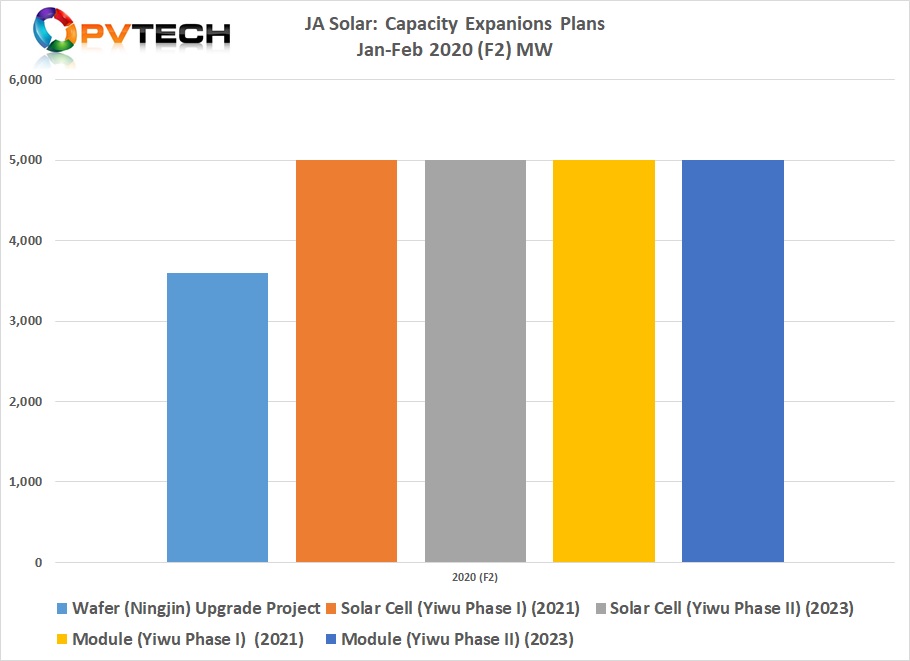 On 13 August 2020 JA Solar started announcing a third wave of planned capacity expansions. This started with a new 20GW ingot/wafer expansion in Nanhaizi Industry, Qujing Economic and Technological Development Zone, Qujing City, Yunnan Province, China. The capital expenditure was expected to be around RMB5.8 billion (US$857 million). The planned expansions are to be carried out in two phases, taking 36 months for full completion.

This was followed four days later with another round of announcements, totalling 11.2GW. Included in this single announcement was 4GW of further wafer slicing capacity, split between two subsidiaries (Ningjin Songgong Electronic Materials Co and Crystal Ocean Semiconductor Materials (Donghai) Co) each of 2GW.

JA Solar also announced a major 20GW expansion of ingot/wafer production, located in the Nanhaizi Industrial Park, Qujing Economic and Technical Development Zone, Yunnan province by subsidiary, Qujing Jinglong Electronic Materials Co. The total Capex for this project was to be around RMB5.8 billion (US$853.6 million) with the project split into two phases and completion due in 36 months.

JA Solar also announced in this round of expansion plans a solar cell plant conversion to large-area high-efficiency cells, totalling 4GW at an existing solar cell plant in Xingtai City, Hebei Province. The total investment for the project was said to around RMB1.18 billion (US$174 million).

The SMSL member also announced it would utilise and existing facility in the Fengxian Comprehensive Bonded Zone, Shanghai to upgrade to large-area module assembly production, totalling 3.2GW of nameplate capacity at a capital cost of around RMB332.48 million (US$50 million). The conversion was said to take around six months to complete.

It should be noted that very few major manufacturers have specifically detailed manufacturing facilities that are being upgraded to high-efficiency large-area wafer/cell production plants, although many long-standing players have legacy facilities that have equipment that is approaching end-of-life and needs to be retooled or shuttered. Because of retrofitting facilities, it can become difficult to establish if new nameplate capacity is being added or whether such plans simply replace existing nameplate capacity.

However, on the basis of the information available it would seem that re-tooling existing facilities can add over 1GW of extra capacity, or more than a 50% capacity increase, due to new tooling density, productivity and higher overall cell/module conversion efficiencies. 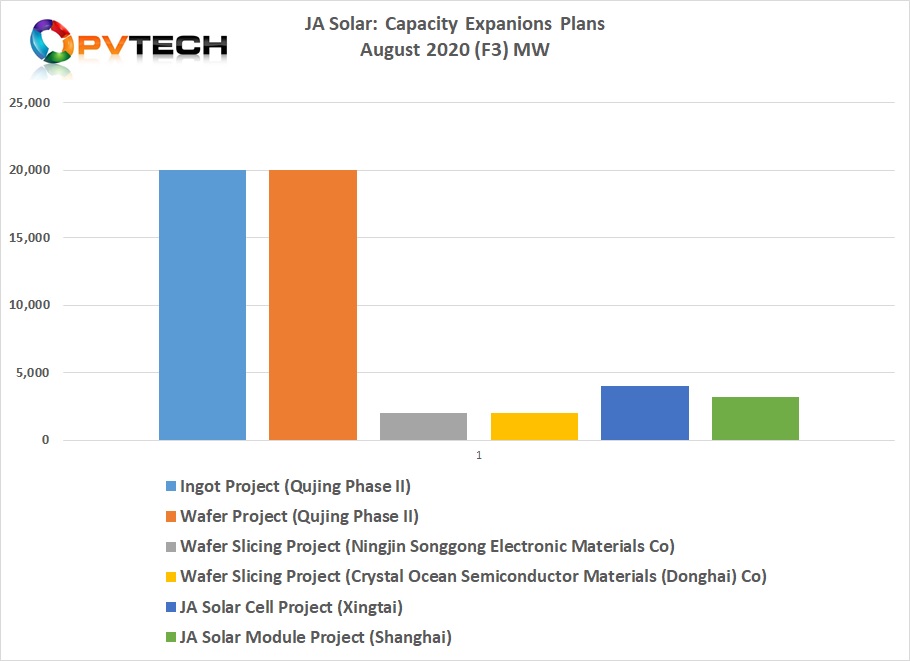 The fourth wave of capacity expansion announcements was announced in mid-September. Although JA Solar updated on some of the previously announced plans, several new expansions were also announced at that time.

The first was a 3.5GW high-efficiency large-area solar cell plant in Gwangju Industrial Zone, Gwangju Town, Viet An County, Bac Giang Province, Vietnam at a capital cost of around RMB1.47 billion (US$217.2 million). The project construction period was said to take around 15 months. JA Solar has operated a wafering plant in Bac Giang, Vietnam since 2015.

Also included were plans for JA Solar Vietnam to expand module assembly production at the same location by a further 3.5GW to support the solar cell expansion. The company said that the project would cost around RMB700 million (US$102.5 million) and be completed in 11 months.

With inclusion of a 1.5GW ingot-wafer expansion announced in 2019 for the Vietnam manufacturing hub, JA Solar is significantly expanding its manufacturing footprint in the country, specifically for sales in overseas markets, not least expanding sales in the US.

Another major new project announcement was a 6GW high-efficiency large-area solar cell project, via its subsidiary, JA Solar (Yangzhou) Solar Technology Co. Located in the Yangzhou Economic and Technological Development Zone (ETDZ), Jiangsu province, JA Solar said the project would take around 12 months to complete at a total investment of around RMB1.72 billion (US$252 million).

The smallest project announced was a 1GW ingot expansion in Ningjin County, Hebei province, accompanied by a 5GW expansion of wafering operations. This project is expected to be complete in 12 months at a cost of around RMB 670.6 million (US$98 million). 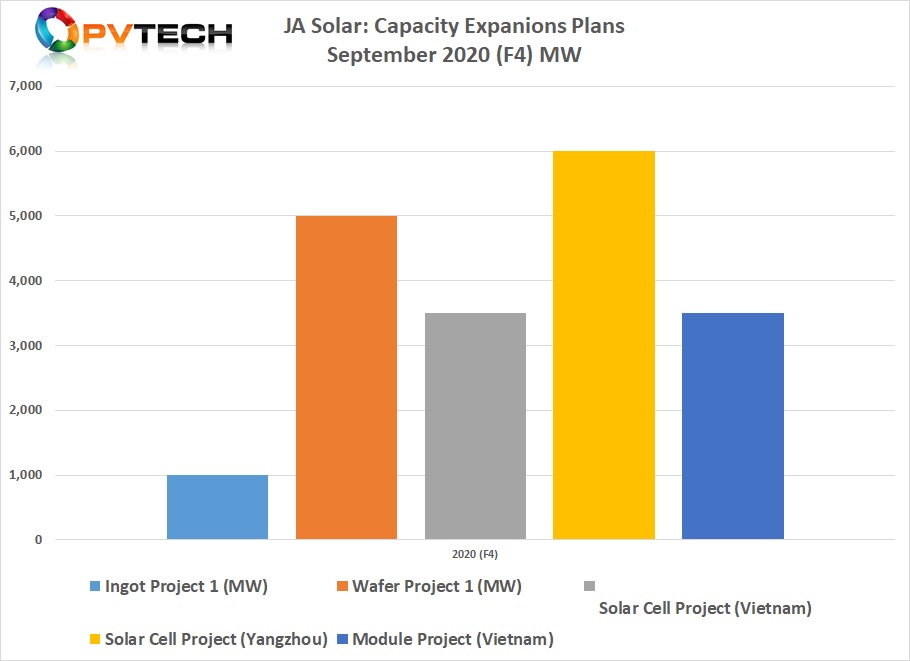 The combined total capital expenditure (where noted) is guided at over US$4.1 billion through to the end of 2023. 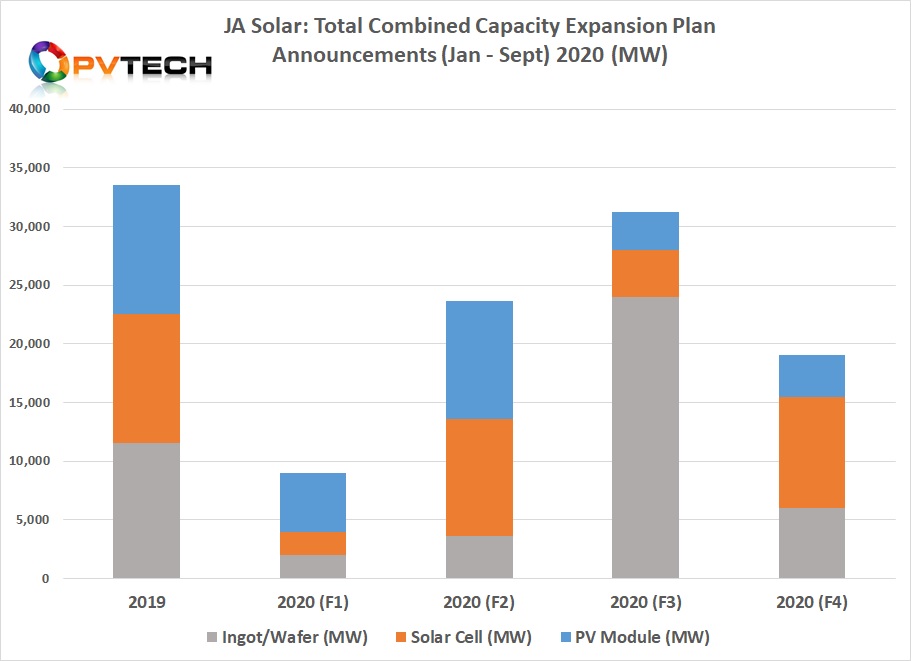