Kerala’s dream of solarising every roof 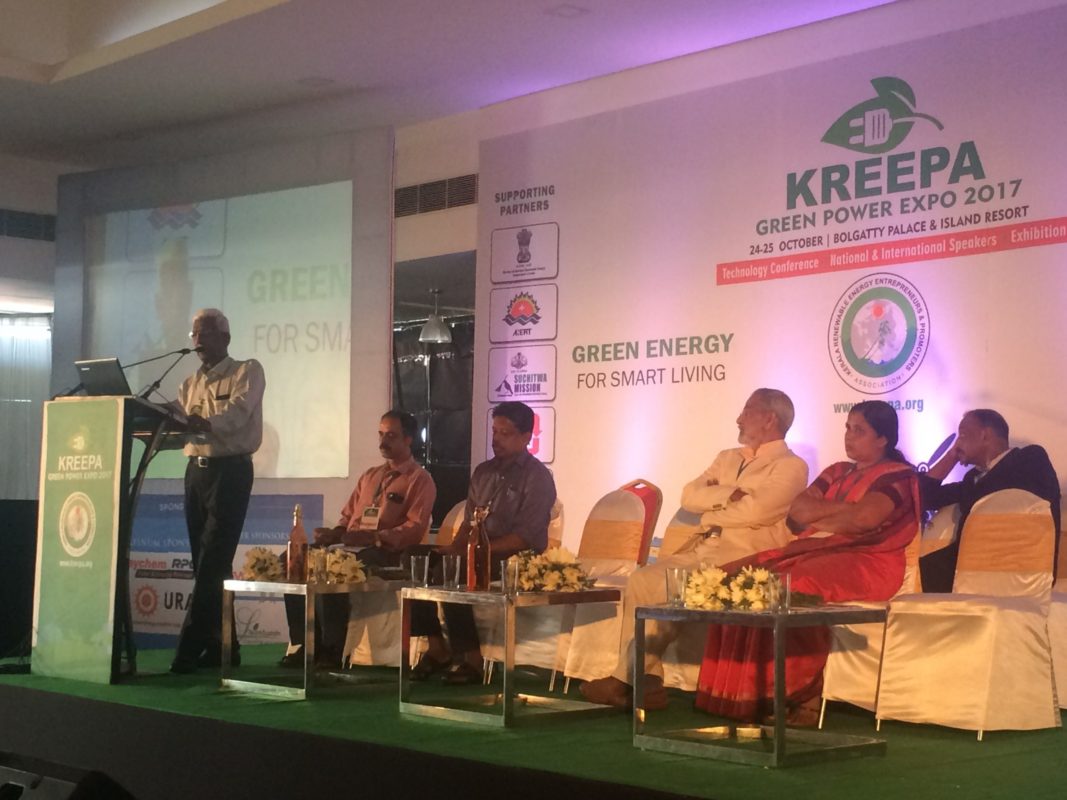 With the world’s first solar-powered airport, as well as India’s first solar education centre and floating PV projects, the state of Kerala has been a frontrunner in innovation and now its industry has an eye on a hugely ambitious rooftop solar goal.

As one of the most densely populated states in India facing land constraints, Kerala’s activity in utility-scale solar has been negligible compared to the neighbouring states of Tamil Nadu and Karnataka, but rooftop solar is seen as a major opportunity here.

At the opening day of the Green Power Expo 2017 in Kochi, organised by Kerala Renewable Energy Entrepreneurs and Promoters Association (KREEPA), the association voiced its dream of having at least one solar panel on every roof in the state in the next five years.

The rooftop thrust was also complemented with other innovations on show at the Expo, including solar rickshaws – particularly pertinent given the post-Diwali smog encompassing several Indian cities this month – and hybrid solutions. 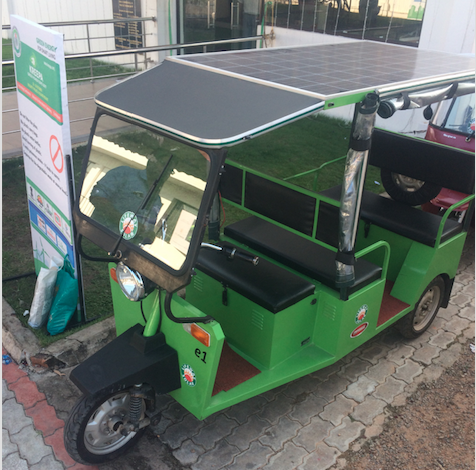 Kochi’s first solar boat was also at hand for a ride: 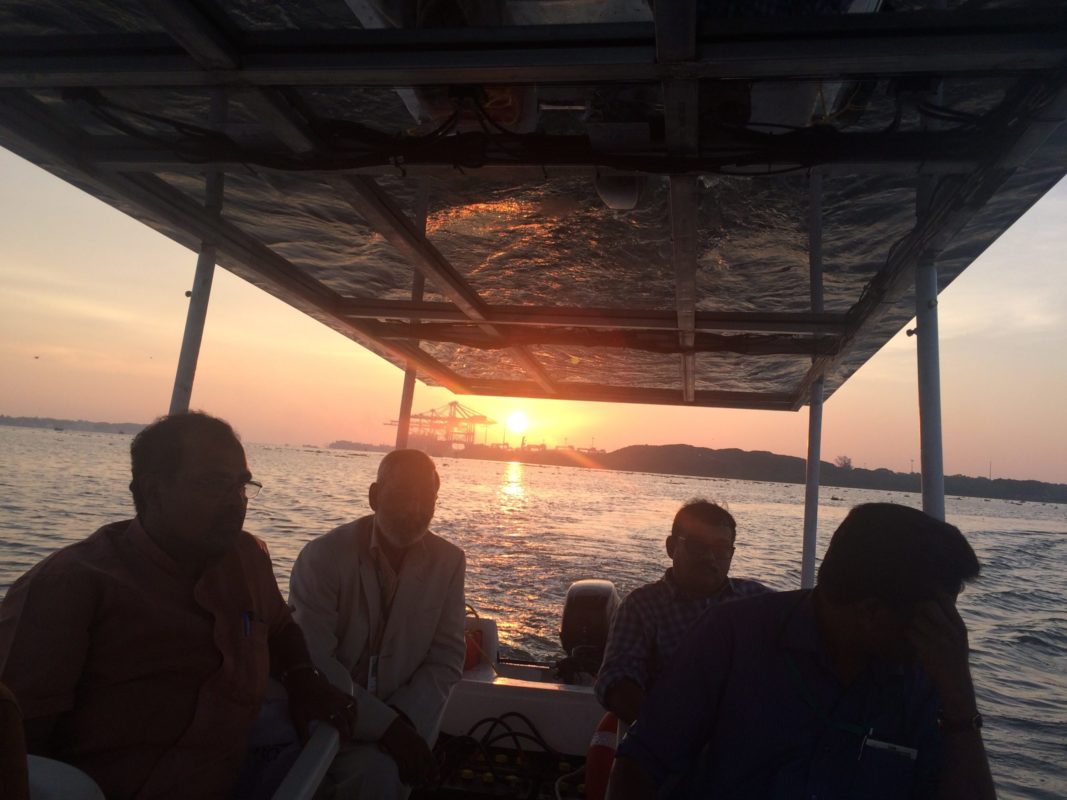 G. Sivaramakrishnan, joint secretary, KREEPA noted that Kerala has 8.5 million rooftops with at least 5 million of them solar-ready so the target is at least possible at these suitable sites.

In terms of capacity, Kerala’s aim is to reach 800MW of rooftop PV by 2022, but the state has reached just 75MW of solar in all segments to date, according to official figures, but many feel the true capacity is far greater.

Opening the KREEPA Green Expo, Dr G. Prasad, director of the Ministry of New and Renewable Energy (MNRE), said solarising every roof in the state would be possible, but is more likely to take 10 years. He stressed that there are issues around service (O&M), particularly with some customers having solar or storage for some time only to discover that their supplier has disappeared when the system needs maintenance. Customers who experience this kind of situation were unlikely to promote solar and were more likely to give bad press, which would slow down the momentum of rooftop PV growth.

He added: “Solar will not happen unless you have a proper rooftop service and you invest in the problems you are going to face in 10 years time.”

Kerala has only just shrugged off the impacts of negative press from a highly political and infamous ‘Solar Scam’, led by fraudulent company Team Solar, back in 2013. Delegates at the Green Expo did however feel that consumer understanding of and positivity towards solar is rebounding.

Kerala’s Agency for Non-Conventional Energy & Rural Technology (ANERT) had cut subsidies for rooftop solar back in March 2016. While, the central government, via MNRE, still hands out a 30% subsidy for the residential segment, Prasad said the government is slowly winding down these benefits. With the cost of solar coming down, the market is expected to hold its own without financial support in the near future. The government has also noticed that only the wealthy are benefitting from the subsidy, while the less well-off, at whom the subsidy was aimed, are not taking up rooftop at present.

Prasad also noted that distribution companies (Discoms) do not want to lose high paying customers, and this conflict of interest is a drawback to the industry.

In fact at a CEO roundtable at the REI Expo in Delhi back in September, one executive suggested that Discoms should be put in charge of rooftop programmes so that they can manage their impacts in terms of grid integration. However, this was met with silence in the room.

Terence Alex, founder and CEO of Trivandrum-based rooftop solar and off-grid firm Wattsun, said that one of the biggest challenges is the Discoms not giving consumers permission to use net metering. In some cases across India – not just in Kerala – systems have been installed for two years on the guarantee that net metering would be available but they are still waiting for approval.

Over the summer, consultancy firm Bridge to India said that net metering regulations were actually improving across India on the whole, but it remained “a sore point for the market” with Discoms and state agencies either ill-equipped or unwilling to adopt rooftop solar.

Alex said the process lacks a single window clearance and there is too much bureaucracy in Kerala to get net metering approved quickly. This is another opportunity for frustrated consumers to spread negativity about solar.

The commercial segment, on the other hand, already offers clear savings without subsidies. For example, Alex said that the C&I space attracts power tariffs in the LT7 bracket of INR11.40/kWh (US$0.176) plus 10% duty charge, which comes out at INR12.50/kWh overall. His company Wattsun can then offer commercial customers a hugely reduced tariff of just INR6.60/kWh. Commercial solar also benefits from accelerated depreciation (AD) on income tax.

However, Alex said that current tariffs for high-energy using residential customers are also high enough to be able to offer savings through solar without support. Household take up is just less rapid at the moment.

Kerala also has major processing outlets in rubber, coconut, fish and cashew nuts providing plenty of scope for solar on the industrial side.

Almost pre-empting many of the concerns raised throughout the first day of the Expo, Aneesh Prasad, programme officer at Kerala’s renewables nodal agency ANERT, announced that the agency was going to support banks in giving soft loans for solar. It is also introducing 140 service stations throughout the state.

ANERT is also carrying out a solar census by launching a new app, promising a year’s free insurance to anyone that registers their system, as well as a complementary service for systems installed in the last five years. Finally, it is also focusing on education and training for installers, given the lack of trained manpower.

Indeed, there were several representatives from educational institutions at the Green Expo, who stressed the importance of getting solar and renewables into school and college syllabuses.

Given the issues of land scarcity, there were also plenty of calls for Kerala to “think outside the box” to achieve its clean energy goals. Indeed Kerala is already home to India’s first two floating PV plants of 100kW and 500kW capacity respectively as well as its largest solar carport by Tata Power Solar. Combinations with small hydro were touted and a strong case put forward for micro-grids.

V.K. Damodaran, international energy consultant, UNIDO, and chairman, Centre for Environment and Development, said that coastal pumped hydro storage could also be utilised given the state has around 590 kilometres of coastline available.

While it was claimed that Kerala has not had a power cut for seven years, it was also noted that more than half its energy has been imported, so for the sake of energy security, these innovations will have even more value.

Kerala’s Renewable Energy Purchase Obligations (RPOs) in 2017/18 as a total percentage of consumption, excluding hydro, are 4.75% for solar and 9.5% for non solar. In 2018/19 this rises to 6.75% for solar and 10.25% for non solar. While significant ground-mount projects have been achieved at the Kochi International airport, along with a 200MW large-scale tender, the lack of major government-backed solar parks suggests that rooftop for now is the segment to go for in Kerala.