The new Q1 2020 bankability analysis has now been completed by the PV-Tech market research team, ranking PV module suppliers within the PV ModuleTech Bankability Ratings. The listing reveals that LONGi Solar now commands AAA-Rated status, the highest grade achievable. A further seven module suppliers are in the AA and A bands and four suppliers fall into the B levels.

This article reveals the new ratings grades for leading global module suppliers, based on the proprietary bankability methodology established by our in-house research team during 2019, and outlined across a series of articles on PV-Tech accessible via links within the final piece here. In the sections below, I also try to explain why LONGi is alone in the AAA-Rating band today, and what is differentiating the business model for the company.

The full analysis of each of these 28 module suppliers is contained within the new PV ModuleTech Bankability Ratings Quarterly report; details on how to access this report can be obtained through the link here.

When we undertook the research to derive the necessary methodology to derive company-specific bankability scores (quarterly, between 0 and 10) and grades (AAA to C), it was clear that financial health had to dominate manufacturing strength, as the single most important metric. This was explained in detail when we discussed the methodology online last year, and especially across the finance-based part of the model used, and discussed in the article here.

Even without doing the necessary statistical analysis, and comparing historic direct observables going back 10 years for module suppliers to the industry, it is not rocket-science to say that financial stability is the single most important factor in supplier bankability (ahead of shipments, ahead of one-off module testing).

We have noted in the past few months that, in order to be A or B level graded, shipment volumes (specific to non-residential segments globally) now have to be at the multi-GW level. What then largely determines the ranking of the multi-GW suppliers is heavily impacted by financial performance of the module suppliers, or their controlling parent entity (guarantor).

One of the key issues that emerges in doing the analysis each quarter is the dependence of each company (parent entity) on module revenues/profitability.

Everyone knows that module supply is a cutthroat business proposition: constantly trying to keep COGS values 10-20% lower than module ASPs. Few module suppliers today have stand-alone module operations that are highly profitable, with gross margin performance at the 15-20% being almost heroic now, and the domain of a small handful.

Running a business with gross margins here is tough going. This is typically translating to operating margins in the low-to-mid single-digits, and invariably going into the red when anything unforeseen happens or one-off charges hit the P&L (as tends to happen more often than not in solar).

Therefore, almost by default, it is extremely hard to operate pure-play as a PV module supplier and have anything other than above-average financial health. The list of PV module suppliers that have fought trying to establish non-module supply revenue streams is vast, and very few have succeeded in this regard. Today, JinkoSolar, First Solar and Canadian Solar are the stand-out exceptions to the rule, with Canadian Solar also benefiting from instant-cash generation on tap owing to its ability to run a profitable downstream PV business alongside manufacturing (a rarity).

The ideal would appear to have module revenues somewhere in the region of 30-50% of reporting group turnover. This level allows two things that are key to being a top-rated bankable module supplier, and I will explain each of these now.

A module business that is below the 30% lower-bound of the 30-50% band noted above tends to relegate module supply business to reduced status at the company level.

For example, if module business is, say, only 1-2% of company turnover (as an extreme), then it can happily exist as loss-making so long as the company’s core business is profitable. This is how many of the Japanese and Korean companies over the years have run module operations. The business mode here essentially prevents doing what is essential internally to be PV-profitable, make needed capex/R&D investments annually, or keeping up with the rapidly moving technology/performance curve. Knowing at any time, an easy decision can be made to exit PV is not reassuring from a module buyer standpoint.

Having module operations that are significantly above 50% of turnover ultimately takes us to the pure-play scenario that I discussed above (at the other end/extreme of importance). It is great to ship 10 GW of modules each year, when making any operating profits. Conversely, if costs are above ASPs, the more that is shipped, the higher the losses; things can go from good to bad very quickly here, and the industry has many casualties over the years in this regard.

Being in the 30-50% range of turnover seems to allow for module business to remain a key priority, but also creates the space for other revenue streams to (ideally) be highly profitable. Today, there is only one company doing this with a good level of perfection: LONGi Solar. This – in addition to module shipment levels trending at around the 10-GW-level – forms the basis for the company being the only AAA-Rated module supplier in the industry today. Let me explain more now.

To illustrate how LONGi Solar is operating a differentiated business model to the other A and B rated module suppliers, let’s have a look at a couple of graphics now.

The first graph below looks at the twelve A and B level graded module suppliers in Q1’20, and shows the percentage of business coming from module sales. For reference here, we are using trailing 3-quarter averages to smooth out any lumps/seasonality or one-off effects. Also, module sales are for both third-party and in-house shipments; for in-house shipments, we use the prevailing external ASPs for any intra-company sales of modules. This allows us to capture ‘true’ module sales revenues. 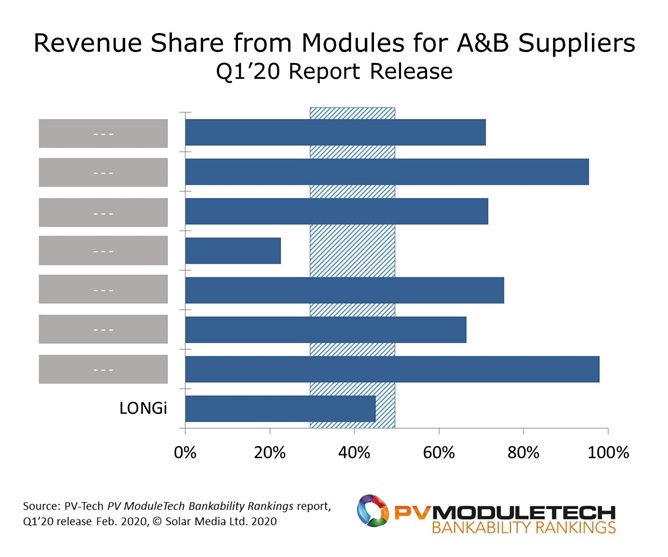 The vertical region above shows the 30-50% sweet-spot for module share of revenues. Except for LONGi, we anonymize all other module suppliers here, although some of these are fairly easy to second-guess.

This shows that most of the leading, most-bankable module suppliers today are heavily dependent on running a profitable module sales operations. Most are running at 70-100% of revenues coming from modules. Again – great when things going well, but nothing to fall back on when something unexpected happens.

The second graph looks at a benchmarked profitability metric; in this case operating income divided by total assets, for each company. Again, the graph shows the 12 module suppliers in the A/B bands, and uses trailing 3-quarter averages. 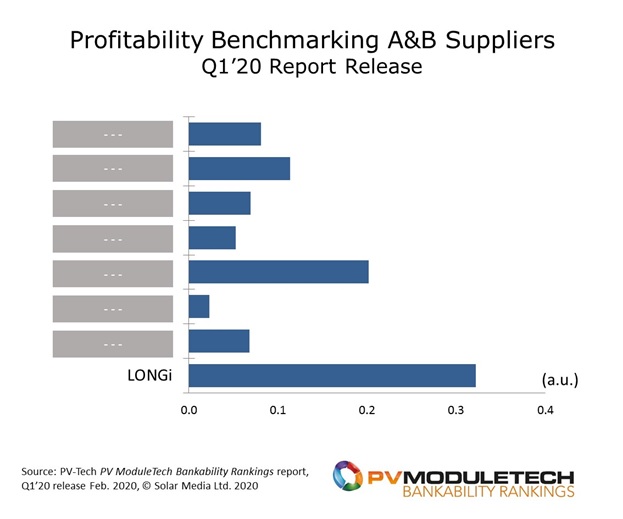 The above graph shows clearly why we believe that LONGi’s model today is unique among the multi-GW module suppliers to the industry, and is implicit in the company being AAA-Rated today. The big question that should be on everyone’s lips right now, at this point in the article is: how is LONGi doing this?

Here, the answer is very simple: mono wafers. Anyone that has been reading my commentaries on PV-Tech during the past decade will know my thoughts here, but let’s summarize again.

LONGi invested wisely, in a timely manner, and with total conviction that PV technology would change from multi-wafer dominant to mono-wafer dominant. Furthermore, the company (as it turns out correctly) ignored all the learned third-party research firms that forecasted weak long-term industry deployment growth.

LONGi’s strategy has played out to perfection, and the company now is cashing in on being the number-1 ingot/wafer producer/supplier to a mono-dominant sector; more importantly, profits selling wafers are (still) extremely attractive and there is nothing to suggest this will change going forward at all.

Of course, there is a great deal of benefit having any non-module revenue stream (>50% sales) that is reliable and highly-profitable and with great growth opportunity. It is even better if this business model is synergistic with module sales fortunes. Contrast this, for example, with many Chinese module suppliers, even at the GW-plus annual level, where non-solar business units are in completely different sectors.

When we released the first PV ModuleTech Bankability Ratings at the end of 2019, the hierarchy was best visualized in a pyramid form. The full list of the 28 module suppliers at CCC-Rating and above for Q1’20 is shown below now. 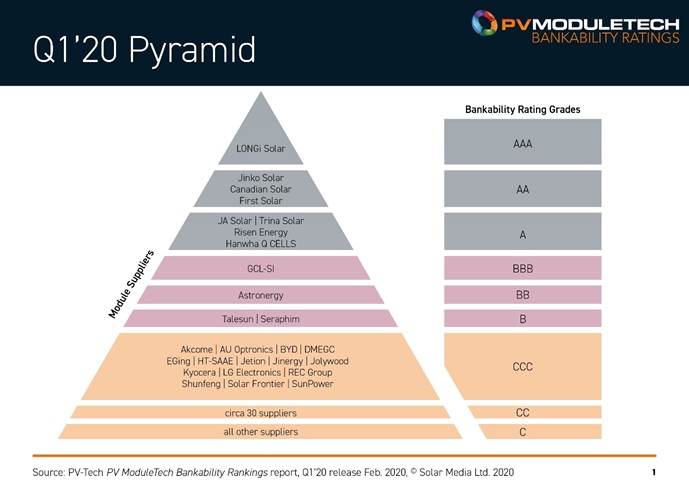 While LONGi has moved from AA to AAA in the past few months, other AA-Rated suppliers (JinkoSolar, Canadian Solar and First Solar) remain unchanged, as do several of the A-Rated suppliers such as JA Solar, Trina Solar, Risen Energy and Hanwha Q CELLS.

Of the A-Rated listing, both JA Solar and Trina Solar appear to have turned the corner now, following the ‘reset-years’ of 2018-2019. Announcements from each of these companies since the start of the year (related to capex), coupled with strong 2H’19 shipments, suggest that both JA Solar and Trina Solar will be moving back into AA-Rating territory later in 2020 (assuming no major impact on finances during 2020).

Over the past few months, we have undertaken further improvements in the Bankability methodology that appears to give better visibility into company ratings and fortunes 2-3 quarters out. Essentially, this is done by setting the scaling/product constants in the bankability equation on a quarterly basis, as opposed to having fixed values applied to any quarter (historic, current and future. This also replaces the need to apply percentiles that were discussed before. Basically, this is allowing us to use the model to forecast metrics 2-3 quarters out from now, which offers greater scope for validation.

Over the next few months, ahead of the Q2’20 release/analysis, we will be completing the analysis on many of the suppliers in the CC-Rated band. This is very much a mixed bag, and for large utility-scale global projects, few if any of these suppliers are ever short-listed as a viable candidate.

It remains (rightly) the case that large utility-scale projects are the domain of multi-GW module suppliers. The industry is still awash with sub-GW capacity (much lower production) module suppliers that are either country-specific or dealing with rooftop markets and having installer/distributor networks. For clarity again, we remove residential/small-rooftop shipments from our bankability analysis. Even before any analysis is needed on financial operations, most PV module suppliers are firmly C-Rated owing to very low non-residential shipment volumes.

To be in the top-20 or so in terms of bankability, it is also necessary to have GW-plus annual shipments (non-residential); for the A/B grades, this increases to multi-GW. It has been an ongoing question we have had since we released the rankings from ‘smaller’ module suppliers that are also normally regional/rooftop focused and why they are not rated A or B, or even listed. This comes back mainly to low non-residential shipments.

The final point to mention is how best to use the Bankability Ratings. The question that comes up routinely is how this relates to module quality/reliability. Here, one has to draw a clear line. Module quality and reliability is only validated by third-party test/reliability agencies and is specific to the module type and specification from any supplier, at any given point in time. In this context, the bankability analysis that forms the ratings here is truly best used as a means to short-list, sanity-check and benchmark suppliers, using an independently compiled (unbiased) set of data for all companies across shipments, regional shares, technology roadmaps, in-house capacity, production by region, capex, R&D spending, etc., and financial metrics across key health-related ratios.

The next full update of the report will be during Q2’20, in April/May 2020. To contact us regarding the report, please use the feedback tool on the link here.