Capital expenditure (capex) for solar cell manufacturing is to see increased contributions in 2017 from Vietnam, India and Thailand, expanding the global footprint of cell manufacturing outside China across different countries in the Asia region.

This is one of the key takeaways from the new release of the PV Manufacturing & Technology Quarterly report by the in-house market research division of PV-Tech’s parent company, Solar Media Ltd.

The themes are also highly topical as they form a key part of the PV CellTech conference in Penang, Malaysia on 14-15 March 2017, where CTOs and Heads of R&D from the leading wafer and cell producers will be on stage talking about their company’s technologies and roadmaps.

The shift of cell manufacturing to Southeast Asia became a focus for Chinese module suppliers with global supply aspirations, needing to have cells and modules produced outside China and Taiwan, in order to avoid anti-dumping related import tariffs to Europe and the US.

Here is the graphic (below) that shows very clearly what has been happening with cell capex, where the underlying data is derived bottom-up from a detailed analysis across more than 100 companies shaping the landscape of cell production and shipments today. 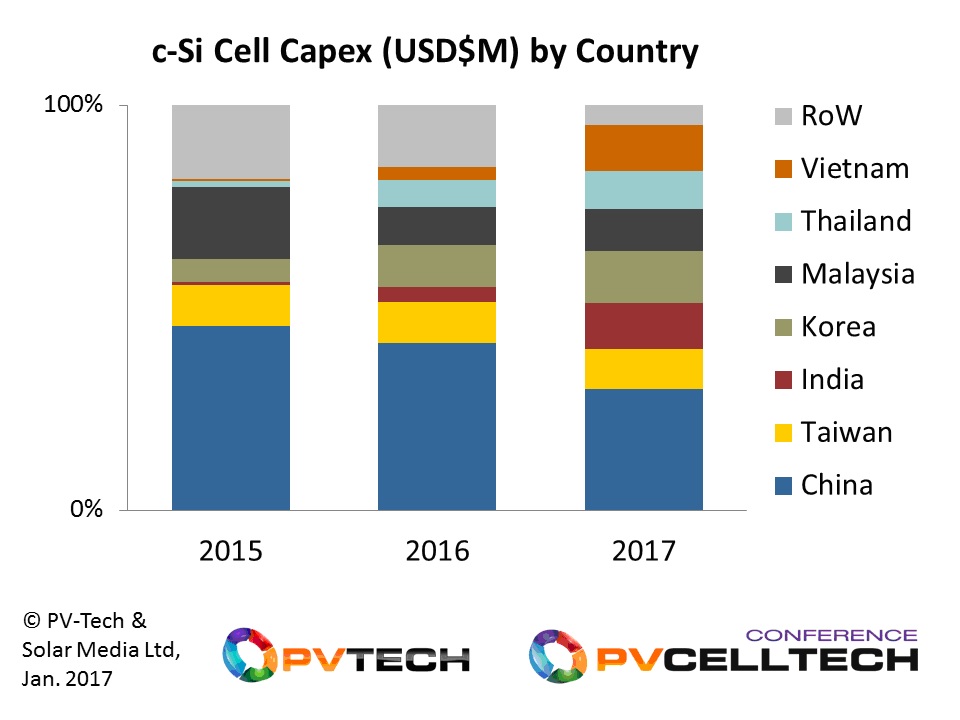 Capex in 2015 was still dominated by China, as domestic demand for solar cells was kept strong by local market activity. A huge portion of the China 2015 and 2016 cell capex was from Chinese cell and module producers that have no presence outside China. Much of the equipment spending here went purely to Chinese based tool suppliers, now covering Chinese made screen-printers, with Maxwell Technologies taking significant business in China that a few years ago was owned mainly by the Baccini operations of Applied Materials. Diffusion furnaces, PECVD and wet benches for many of the China-only companies are also a local affair.

In 2015, Malaysia became the big focus for Chinese companies (and some Taiwanese) to set up cell production in Southeast Asia. It was an obvious first choice, benefiting from the infrastructure and resources built around SunPower, Panasonic, Hanwha Q-CELLS and clusters of semiconductor manufacturers. This provided a strong uptick for cell capex from Malaysia, with European and US-based tool suppliers being the main beneficiaries.

2016 saw the first moves of activity from Vietnam, Thailand and India for new cell capex growth. The dynamics of each are very different, with some companies operating analogous to parent-owned job-shops, under a local name, and on the back of Chinese investment and control. Others appear to be more autonomous, albeit operating at arm’s-length from the OEM customers whose business is their very survival.

India is an altogether different proposition, with Adani doing what many had spoken about in India for the past 10 years, and many Chinese had said they wanted to do – set up a custom-built GW+ cell and module fab. Mundra puts India on the cell manufacturing roadmap in 2017, and this will help every other cell producer in India, not hinder them.

Korea of course operates with a different agenda to other countries in the region, and the spending uptick tends to come from strong investments from domestic industrial powerhouses, aligned with R&D and know-how staying firmly in the country. Within this category, we have LG Electronics. Expansions by LG Electronics don’t come cheap, and back-contact cells in mass production are far from easy as we know. So 2017 could see downward revisions from Korea, compared to what is shown.

But from the graph above, it seems there are going to be seven major countries driving PV cell capex during 2017: a far cry from 2010 when all roads led to China and Taiwan. It is also one of the single biggest outcomes from the initial petition filed in the US to examine claims of anti-dumping for modules being shipped from China to the US.

Similar to the cell capex above, a full analysis of polysilicon, ingot, wafer, module and thin-film capex has been done by our research team and features in the latest PV Manufacturing & Technology Quarterly report, released this week.

One of the sessions at PV CellTech in Penang, 14-15 March 2017, has also been set aside for presentations from the leading cell manufacturers from India, Vietnam and Thailand, and where we have Adani, Boviet Solar, IndoSolar and Talesun among the key speakers. Almost every other major cell producer across Southeast Asia will be speaking at PV CellTech. Details on how to register to attend the event can be found here.

14 March 2023
PV CellTech will be return to Berlin on 14-15 March 2023 and looking at the competing technologies and roadmaps for PV cell mass production during 2024-2026.
c-si manufacturing, pv celltech, solar cell