Transparent PV (TPV) aims to optimize both the transmission of visible light while maximizing the wavelength selective absorption of ultraviolet (UV) and near-infrared (NIR) light spectrum for power conversion. The Ubiquitous Energy graphic below illustrates the TPV concept on glass without resorting to an electromagnetic spectrum chart. 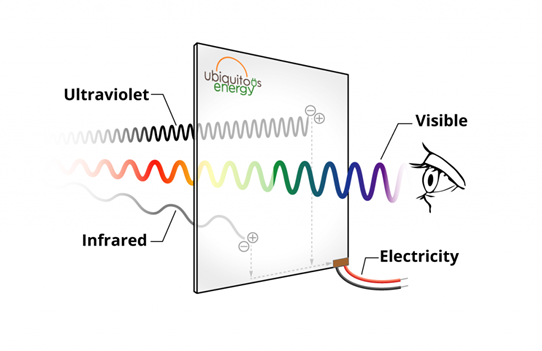 TPV glass windows offer the promise of offsetting a building’s energy consumption or even satisfying all energy demand onsite. TPV should not be confused with smart glass technologies that darken when exposed to heat, light, or the application of voltage to change states.

For non-wavelength selective TPV, a tradeoff exists between power conversion efficiency (PCE) and AVT; improving AVT decreases PCE and vice versa. Wavelength selective, single junction TPV has a theoretical Shockley-Queisser (SQ) limit of 20.6% PCE at 100% AVT though PCE could be increased by adding junctions. However, quartz glass alone has about 92% AVT, and a typical double-paned IGU (insulating glass unit) has ~80% AVT dropping to 70% AVT with the application of a low emissivity (low-e) coating to further reduce heat transmission.

Besides AVT, the colour rendering index (CRI) describes the quantitative accuracy of the colour rendered through a transparent medium (i.e. glass) or from a light source referenced to an ideal illumination source. Normalizing with a 0 to 100 scale, TPV with a ~70 CRI is considered good quality and greater than 85 CRI is regarded as highest quality. A typical US LED replacement light bulb has a CRI of 80.

In order to compare various TPV technologies for diverse applications, a new metric has been proposed called light utilization efficiency (LUE) defined as the product of PCE and AVT (LUE = PCE x AVT) to capture the overall system efficiency of power conversion and light transmission.

Let’s look at two of the TPV companies, both thin film technologies, from the above table in more detail: Ubiquitous Energy and Onyx Solar. I’ve left the discussion of transparent luminescent solar concentrator (TLSC) approaches for another time.

Spun out of MIT in 2012, Ubiquitous Energy was co-founded by MIT PhD students Miles Barr (current Ubiquitous CEO) and Richard Lunt (Johansen Crosby Endowed Associate Professor, Michigan State University), and MIT Professor Vladimir Bulović (Associate Dean of Innovation, MIT School of Engineering) with exclusive IP rights to the core technology and US$1 million seed funding. After years of developing and proving the technology via grants, Ubiquitous raised a US$5.8 million Series A funding round in 2014 and made the strategic move to a Redwood City, California, USA, headquarters facility in order to build their first coating line.

As verified by a certified third-party testing laboratory, Ubiquitous Energy’s wavelength selective TPV glass has achieved ~6%+ PCE with 50-85% AVT and high CRI greater than 95%. Targeting greater than 10% PCE on their technology roadmap, Ubiquitous can optimize PCE, AVT, or both to meet a variety of future applications via material selection, layer thickness, and the number of layers. Ubiquitous uses a standard physical vapour deposition (PVD) process at low temperature to deposit less than 1 micron thick of thin-film.

Although an early paper on the Ubiquitous technology focused on Organic PV (OPV) materials, Ubiquitous claims their latest technology is a combination of organic and inorganic materials.

Ubiquitous and their partners are conducting accelerated life testing using established PV and window glass standards to guarantee durability and degradation metrics. Per Ubiquitous, TPV is an expected 10-20% cost adder to architectural glass in high volume production with the global glass partners.

Regarding Ubiquitous Energy, IDTechEx Technology Analyst Luke Gear says: “The new coating line is on track to be operational at some point in the first half of 2018. Since November 2016, the company has been working with two of the four largest glazing manufacturers in the world. The company is now focused on windows for commercial buildings, which is a shift away from consumer electronics.”

Onyx Solar has emerged as the global leader in TPV named PV Glass for buildings completing more than 150 projects worldwide and garnering more than 50 international awards. Based on a-Si (amorphous silicon) technology, Onyx Solar’s PV Glass is non-selective with regard to light spectrum while offering AVT levels from 10-30% and PCE ranges from 4.0-2.8% respectively. An opaque PV Glass variant is also offered with a PCE of 5.8% for curtain walls, spandrels, ventilated façades, or floor tiles.

Onyx Solar manufactures PV Glass from PEVCD (Plasma Enhanced Chemical Vapor Deposition) to lamination with full vertical integration at its facility in Ávila, Spain. The Onyx facility has two million square feet (~200000 square metres) of annual production capacity and ISO 9001 and ISO 14001 certifications. Onyx produces the rather huge 4.0 x 2.0 metre sized PV Glass, the largest available on the market, at the Ávila factory as well as a range of standard sizes. Onyx does not build their own manufacturing equipment, and I have not yet determined their equipment suppliers. All the Onyx Solar products have the appropriate IEC and UL listings as well as meeting the safety standards for architectural glass including “notorious” impact resistance tests.

Even more impressive, Onyx Solar has developed PV Glass products addressing the architectural glass market requirements of architectural firms and building contractors including customized shapes, size, colour, thickness, junction box, and IGU compatibility. The Onyx Transparent Photovoltaic Glass for Buildings (US version) brochure presents all the options in a smart fashion for architects and builders while also addressing the solar PV specifications, comparative pricing, and electricity generation estimates. It should be noted Onyx Solar PV Glass filters 99% of UV radiation and reduces up to 90% of infrared transmission.

On pricing, the Onyx Solar FAQs state: “The price of our standard products depends on many factors, such as technology, glass configuration, glass size, glass colour, total integration area, etc. The minimum offer we offer is €83/sqm.”

However, Onyx Solar only has a 10-year, 80% output power value performance warranty and five-year product warranty for materials and manufacturing defects. At least for the Bell Works skylight retrofit project, the performance warranty was not a concern, and besides generating electricity, the renovation project economics (Bell customer video) for both the PV Glass and installation benefited from the US solar ITC (Investment Tax Credit), accelerated depreciation, and New Jersey SRECs (Solar Renewable Energy Certificates).

As a private company, Onyx Solar elected not to share any information on annual sales volume in square metres or revenue. By the way, Onyx also offers a range of c-Si (crystalline silicon) PV Glass products customizable for size and cell segmentation.

Summing up the state of TPV, IDTechEx Technology Analyst Luke Gear says: “Today only TPV based on conventional PV (c-Si strings embedded in glass, or a-Si and CdTe applied as a thin film), has an established base of installations in the low hundreds of thousands of sqm. I would expect this to continue in the following years because it is the only technology proven to last not just with regards to performance, but also aesthetics – this is very important for architectural acceptance.

“Transparent luminescent solar concentrators (TLSC) offer high visible transparency comparable to that of conventional glazing, but are very low efficiency. There are a few pilot installations of TLSCs in Europe which are gaining momentum, and if efficiencies can be improved (as some companies claim), I would expect this technology to start having a greater impact.

“OPV is still overcoming limitations like cell lifetime, so I don’t expect it to reach production levels for the next 5-10 years or so.”

One area I wonder about is power electronics for horizontal BIPV building applications. At a minimum, strings need to be combined on the same building side. Given the variable lower floor shading environment, existing buildings, and the potential for future neighbouring tall buildings, I expect DC optimizers will be required for curtain walls, spandrels, and ventilated façades. The IoT (Internet of Things) monitoring performance data will be a bonanza for O&M (Operations and Maintenance) and forecasting the performance of future BIPV projects.

Other major emerging markets for TPV with high AVT and reasonable PCE include automotive glass and consumer displays on mobile phones, smart watches, tablets, and displays.

What the transparent solar sector demonstrates is that real differentiation is possible in PV when products are developed from the ground up to address specific market requirements, instead of re-positioning failed technologies.

October 27, 2021
More than half of utility-scale solar projects planned for next year could be at risk of delay or cancellation as a result of surging materials and logistics cost, new analysis has claimed.