Capital expenditure in the PV industry used to be a simple metric to track. A new manufacturing facility meant new capex, it was that easy.

So most people – investors, equipment suppliers etc – would listen out for talk of capacity expansions and then do back-of-the-envelope calculations based on US$/W assumptions for thin-film or c-Si spending.

Others would look at end-market demand and ask what additional capacity would be needed, and then apply their US$/W capex assumptions. Even then, this was at best a highly simplistic approach that would leave most seasoned analysts in semi or displays cringing on the sidelines.

But that was the PV industry up until about 2012. Since then, capex has become way more complicated, for a bunch of reasons. And so, it needs much more thought before diving into any long-term company strategy that relies upon forecasting on who is spending money on capex and when.

Capex is set to be a major theme of PV Tech parent company Solar Media’s forthcoming 'PV Manufacturing & Technology Quarterly Report'. Leading up to the first release of this report, we will be discussing some of the key themes of PV capex on the PV Tech site.

Overall capex growth, but still lumpy at the company level

For clarity, only the manufacturing (or upstream) part of capex is used, in our traditional definition of capex. Many manufacturers with downstream projects business are lumping capex related to developing sites, acquiring rights, etc. into an overall capex figure – if in fact capex figures are given in the first place. Some have started using customised capex segmentation, where traditional manufacturing capex is assigned ‘module’ capex. Put another way, this is upstream capex, and is the part that interests us most in terms of manufacturing and technology.

New research by the PV Tech team has involved dissecting this upstream manufacturing capex at the company level, by quarter, by segment (ingot, wafer, cell, module) and by spending type (new building equipment, new tools, upgrades, debottlenecking capex, maintenance capex). The final breakdown starts to reveal how capex has to be treated with caution these days, and not a precursor to POs being placed on tool suppliers, as in the old days. 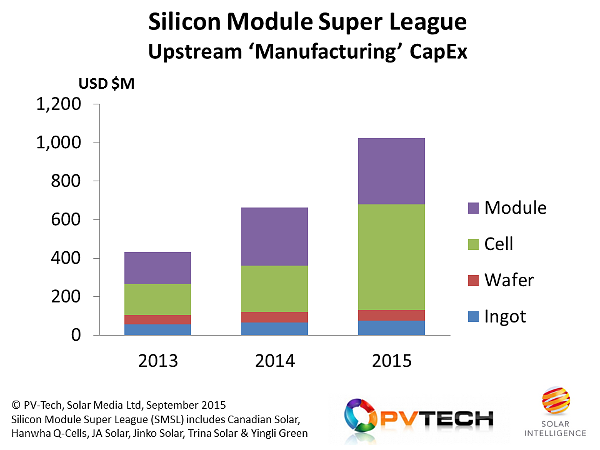 Adding up the capex for the big six of the SMSL by value-chain segment is shown in the figure (above), for the period 2013 to 2015. Looking at spending before 2013 is actually not even relevant anymore, as the way capex was allocated was very different then.

There are a few key takeaways from looking at the SMSL consolidated capex trends. First, annual year-on-year growth from very low values (US$400M in 2013 for potentially the biggest six c-Si manufacturers/suppliers to the end market is low, and not too far off a maintenance-only spend profile across the board), to US$1 billion-plus in 2015. So, regardless of what the capex consists of, this is certainly indicative of a recovery of sorts.

Then we have the type of capex shown in the graph. The very low capex to ingot and wafer is actually more an indication that ingot/wafer capacity is not a main focus of most of the companies in our SMSL grouping. In fact, for most, having a supply relationship with a company like GCL in China is seen as a better long-term approach, and also frees up resource (cash) to focus on cell/module or indeed downstream projects business (where capex values can easily be three to five times, or more, those of upstream capex). Also, of course, ingot/wafer capacity was more top heavy on tooling from oversupply issues a few years back, so there are still dephasing issues between ingot/wafer and cell/module capacities at the macro level.

The main takeaway however is probably the subtle shift towards capex going towards cell activities, and not the module side. This is caused by various factors, all adding up to give the cell/module splits shown from 2013 to 2015.

Module capacity additions are very different for the big six on the SMSL, compared to a few years ago. Even if new equipment is needed, it is costing pennies now, with precious little of this capex ever seeing its way outside of China. And then there is the ability to beg, borrow or steal other module capacity in China to supplement in-house effective levels. There is no shortage of distressed module assets in the PV industry today.

Cell capex is mostly coming from outside China, characteristic of the shift by most of the SMSL to have cell capacity options across Southeast Asia. For most of these expansions, equipment does tend to be new, and still with a strong western flavour. Indeed, the buildings capex side is less visible for now with the initial forays into Southeast Asia; having existing buildings to access, or getting relocation based government incentives as a sweetener is not uncommon.

Trying to spend, trying to save

A key takeaway also from the new analysis on capex relates to the different spending phases (or access to ready cash) of the SMSL grouping.

On the one side, there is Hanwha Q CELLS, whose aggressive expansion plans almost give the impression of a company that can’t spend cash quickly enough. On the other extreme, there is Yingli Green that would likely be happy to report zero capex spending for the rest of 2015.

If there is that much variation in capex across the big six of the SMSL, then it is a reasonable assumption that similar degrees of spend/not-spend propagate across all other PV manufacturers today. Indeed, this is the case, and is something that we want to focus on in much more detail going forward.

In the meantime however, just seeing an uptick in manufacturing capex from 2013 to 2015 will come as a relief to the PV equipment suppliers that have weathered the prolonged storm and have managed to stay afloat during extended periods of minimal new order intake. How much of the US$1 billion capex finally ends up as revenues with equipment suppliers will be interesting to calibrate over the next six to nine months.