The PV CellTech 2017 conference has just finished, having been held over two days in Penang, Malaysia, 14-15 March 2017. The findings were revealing, stimulating, thought-provoking, and in terms of mass production metrics from a PV event, once again ground-breaking.

But perhaps more importantly, we saw just what effect each of the competing PV technologies is having on one another in driving cell efficiencies and costs to levels no-one expected a few years ago.

Solar PV manufacturing has never been so diversified; from both geographical and technological perspectives. Business models exist across the industry for p-type multi, p-type mono, n-type variants and the two mass-production thin-film types (CdTe and CIGS).

PV CellTech had the CTOs and Heads of R&D from almost every major PV manufacturer today, across all of the above technologies. This provided what is becoming a unique forum to get the entire PV technology roadmap presented and debated by the people that are ultimately dictating the performance of the entire 80GW-plus of PV panels that will be installed globally in 2017.

Absent of marketing hype, and largely immune to a fear of competitive disclosure, what I saw over two days at PV CellTech was an industry that recognizes that process and technology diversification is currently driving every manufacturing stakeholder to move efficiency and cost metrics rapidly to new levels.

At the heart of this collaborative engagement is a mature appreciation that the solar industry has no dominant player or obvious technology leader, and proponents of p-mono, p-multi, n-type and thin-film have plenty of scope for market-share gains and growth, so long as they keep on the overall industry curve with regards to cell efficiency, production costs, and product quality.

Also, if you are a cell manufacturer or equipment supplier today, and you’ve been in the business for over 10 years, you are the lucky ones – regardless of how tight margins are today. No long-term company working in solar cell production or supply has been spared of very difficult periods in recent years; so perhaps there is a joint appreciation of this that came over at PV CellTech also.

However, like many other high-tech industries, there is one major driver that makes such an event on commercial solar cell production and technologies work very well. Almost everyone knows one another, regardless of which company and country they are located in.

Most went through the same academic routes, often going back more than 30 years, or have at some point in that time, been engaged on joint research or technology-transfer projects. You can’t put a price on that. 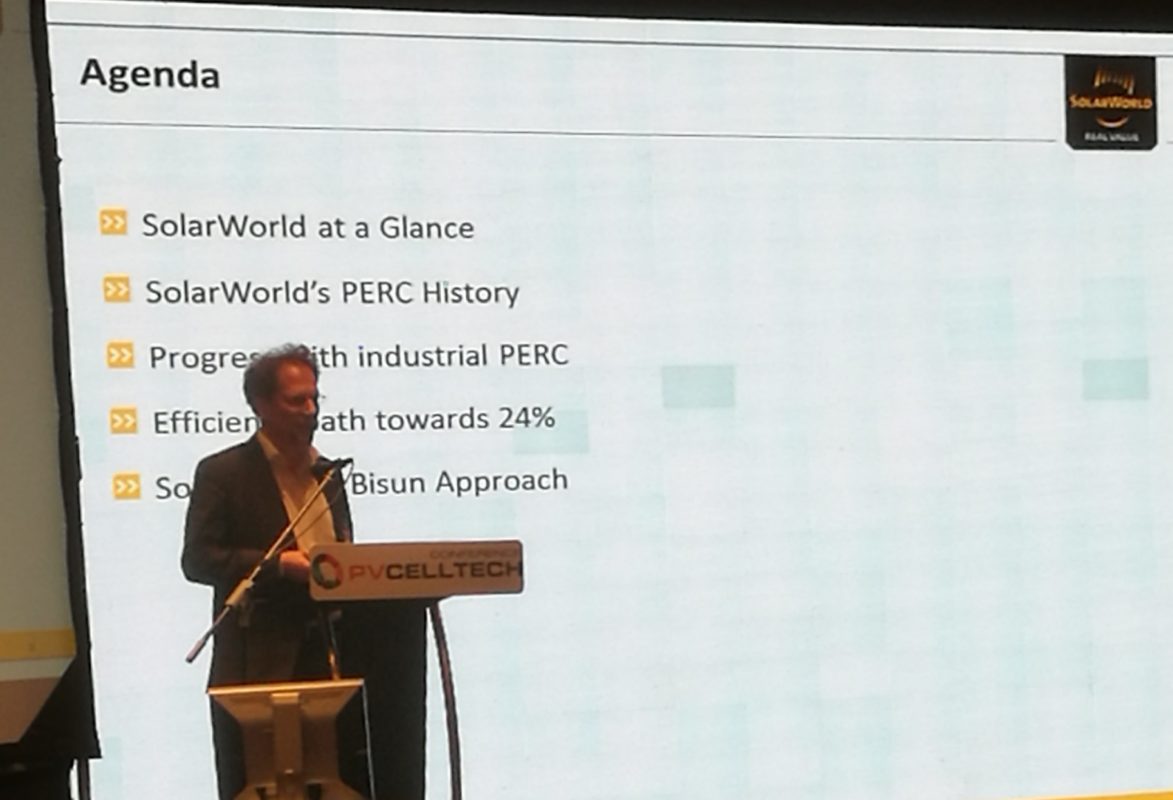 In the past, it was the academic conferences (PVSEC, IEEE) that were the platforms for the research side of things. PV CellTech appears to have plugged the gap in making it the commercial mass production outlet now for this group of technology experts, many of whom are CTOs of the leading companies.

Furthermore, many of the people now on the stage at CellTech were effectively the voices of the solar industry before mass production even existed. And without many of them, and their original research, there would not be a solar industry where talk of GW fabs has now become the norm.

In this vein, while every talk was hopefully interesting to the whole audience, it was the talk from Adani Group that probably best captured the above sentiments. In part, it was because the content came from the speaker Mohan Narayanan, whose background prior to being Technology Advisor to Adani for their new 1.2GW cell and module fab in India, includes BP Solar and UNSW.

Mohan charted out the key research breakthroughs, and the timelines from R&D to becoming mass production, for almost all process steps now taken as granted for most of the global solar industry. He explained clearly that this foundation is effectively what allows Adani, in 2017, to use the learnings from this to construct a 1.2GW integrated cell/module fab in India with performance metrics to match the best-in-class competition on p-type cells.

It is often easy to look at rankings of companies: who has the most GW shipments each year; which companies are adding the most new PERC capacity next year; whose market cap is the highest.

However, at the end of the day, it is the people behind taking the technology from the research lab to commercialization that are the real heroes, and if PV CellTech becomes the forum for these very people to spell out what needs to change in manufacturing going forward, then it will make the event unmissable and equally enjoyable going forward on an annual basis.