During the past few years, the migration from multi to mono, replacing Al-BSF p-type cells with rear passivation layers (PERC), and having the capability of bifacial light absorption, have been the very obvious technology shifts seen within the PV industry.

During 2020, p-type mono PERC cells will account for approximately 80% of all c-Si production, showing that this technology rules supreme within the industry now. In fact, p-mono PERC production is still wafer-supply limited, with the barrier-to-entry for Chinese cell producers now very low. Indeed, as noted in the capex feature on PV-Tech earlier this week, adding 5-10 GW cell fab expansions is now coming with minimal investment levels.

Mono-vs-multi is no longer a question to debate within the sector; nor is the move from Al-BSF to PERC process flow changes. Indeed, bifacial availability is also not an issue to spend too much time on, as any PERC line offers this upgrade easily.

The burning issue for 2020 in terms of c-Si production (still 95%-plus of the PV industry) is entirely based on n-type cell trends: technologies, production efficiencies, costs and production yields. One could remove here ‘yield’ as plans still afoot are 2021-plus impactful. Total n-type cell production will still be less than 10 GW during 2020.

Therefore, n-type is still the industry’s niche play; but recent changes suggest that the term ‘differentiated’ could be far more appropriate. I will explain why this is the case within this article and what has changed in the past few months to create this change in mindset.

This core issue will be the number-one topic to be explored across the two days of the forthcoming PV CellTech 2020 meeting in Penang, Malaysia, on 10-11 March 2020.

Details on how to get involved in PV CellTech 2020 or to register to attend can be accessed through the event website tabs here.

The industry has had n-type on every roadmap for several decades, mostly confined to the two technologies that had been commercialized by SunPower (back-contact) and Sanyo/Panasonic (heterojuction). Each of these companies scaled cell capacity to the GW-level over about a decade, built lines that were bespoke and used tool suppliers many of whom are long gone, and had to rely on wafer supply that was outside of the China p-type expansion phases (both multi and mono).

A more simplified n-type cell design (most aptly labelled still as n-PERT) was developed during this time for mass production by Yingli Green (the Panda technology) and LG Electronics (whose in-house team also set up pilot lines across the above-noted more complicated n-type arrangements).

The LG variant was the one that initial proponents in China latched on to, in the hope of replicating this with a more mainstream equipment supply-china and in anticipation of Chinese tool makers being capable.

While the above-noted companies sought to prioritize rooftop-only markets (for many reasons, but mostly driven by higher ASPs in this segment minimizing losses that were inherent to these early-specified production lines), the Chinese players that had moved into the n-type space were coming to the realization that it was not simply a case of mimicking LG’s process flow, and that performance levels of China-made n-PERT was barely competing with what n-type mono PERC had scaled to very quickly.

A few years ago, a new wave of Chinese optimism took hold, this time swapping the LG-route to heterojunction, and hoping to set up Panasonic-type facilities in China with costs being of China’s own aspirations (i.e. much lower than what Sanyo/Panasonic had been able to achieve).

By the end of 2019, heterojunction in China appears to be in a hold pattern, something I discussed in detail within my last PV-Tech blog earlier in the week.

As we approach the March 2020 PV CellTech event however, other factors are emerging that strongly suggest a return to the n-PERT platform as the differentiated technology-of-choice for the Chinese module majors. I will review now what appears to be driving this and what may unfold in 2020/2021 which could finally see one n-type solution becoming China-mainstream within the industry. 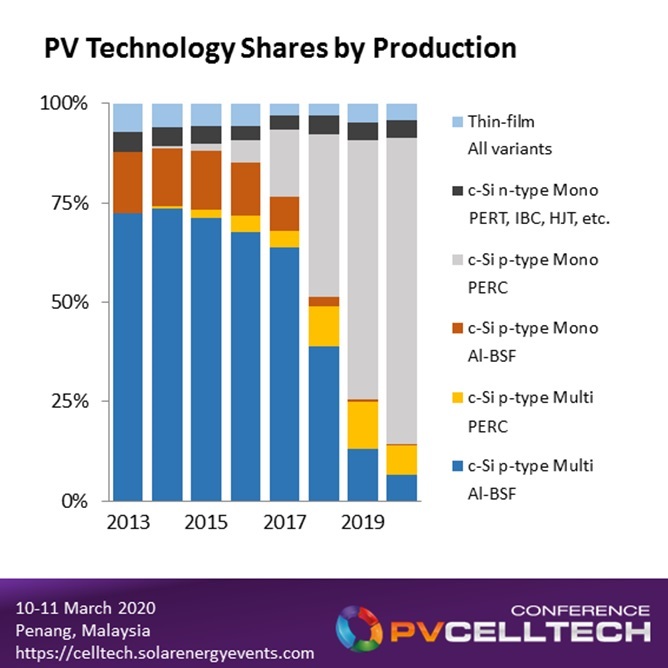 One could argue that if any of the companies in China had seen success ramping any n-type lines until now, it would have changed very little, at least from a global standpoint. Many of these companies were investing here to secure domestic high-efficiency based incentive mechanisms in China, and were absent of overseas sales/marketing even to allow them to export product. Also, selling in China to parent entities removes the thorny issue of bankability or western third-party due-diligence.

The catalyst for change was always going to come from a subset of JinkoSolar, Trina Solar, Canadian Solar, JA Solar or LONGi. If one (or more) of these global multi-GW module suppliers started offering n-type product (for 50-MW-plus project-specific volumes), then at a bare minimum, others in this list would need a defensive tactic (similar product offering) or have a credible roadmap to appease customers that they were indeed technology-leaders.

The other viable Chinese module suppliers (to non-China utility segments) is still a relatively small number (10 max.), but each of these would then follow suit very quickly; each hoping that the work of the big guys had been suitably cross-pollinated within Chinese fabs/workers, allowing them to copy production lines and equipment suppliers without any large R&D investment needed.

While one of the early movers within the above grouping, Trina’s move to n-type was somewhat derailed by the prolonged delisting/relisting process that rather hinders cash-driven expansion issues like ramping a new GW n-type factory.

The single biggest factor is now being effected, with the near-GW level of n-type being ramped up by JinkoSolar. Every GW-level module supplier needs to react to this, and indeed, plans are in place by all companies above to address this. And with heterojunction seen as too high risk/cost, all of these would appear to be based on n-type PERT (TOPCon or one of the other R&D coined terms).

If the China way of adding p-type capacity can be transferred to n-type PERT, then investments will be forthcoming in droves during 2020, most of these adding meaningful production volumes in 2021 and beyond. As soon as Jinko announces having n-type COGS within 10% of p-type (which will surely happen by the end of 2020), and guidance to getting this to within 5%, then n-type will be accepted in China. At this point, one will truly be able to change the terminology from ‘niche’ to ‘differentiated’.

Saying it is a roadmap inflection point is far too early to say however. Mono-PERC (p-type) is likely to be mainstream 80-90% dominant for the next five years. With the industry in mega-growth territory though, moving from 10 to 20 GW of n-PERT related production should be a quick move, and likely happening in 2021.

If during this time, it becomes viable to flip pullers to n-type wafer compliant and ‘upgrade’ new p-mono PERC lines to n-PERT-based (at ultra-low China-costs), then we would be at the point of talking about n-type being a real roadmap transition stage within the industry, possibly occurring during the 2023-2025 period. However, it is easy to talk about these changes in theory; in practice there are many obstacles yet to be overcome.

Opponents of this viewpoint routinely cite the current cell levels coming from n-type PERC as being so ‘good’ that any move to n-type is no longer required. But the industry is still obsessed with cell efficiency comparisons at STC, not elevated temperatures or other operating benefits that come from n-type per se. Even if the delta in cell efficiency is minimal at STC between p-mono PERC and n-PERT variants, the revenue returns for utility sites will make the flip more than worth it.

Therefore, 2020 could is likely to turn out a pivotal year for n-type, starting with Jinko and seeing how success here will snowball across the country’s cell manufacturing base. And if this does happen, then it will only give heterojunction and back-contact a new lease of life, given the greater focus on anything-n-type.

PV CellTech 2020 in Penang, Malaysia on 10-11 March 2020 is therefore coming at the perfect time to assess how things are going in this regard. Talks on n-type form a major part of the two-day event, many coming from industry leaders in cell manufacturing today at the 5-20 GW level. To attend, sign up here.