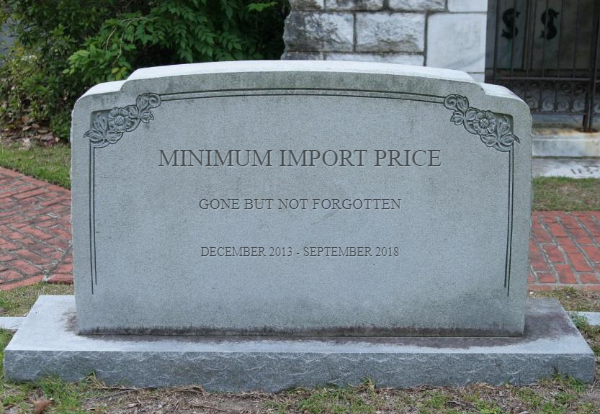 Those in the solar industry were all too familiar with the sharp edge of a trade war long before the recent spate of tit-for-tat tariffs between the US and China.

In Europe, the solar-specific measures lapsed earlier this month. The impact of the minimum import price (MIP) is impossible to measure in isolation. What we can say is that deployment in the last five years has been unspectacular and there are fewer manufacturers in operation as well.

The first issue is resolving itself already through a combination of factors. Falling equipment prices, better grid integration and rising power prices in most countries mean a burgeoning PPA market and slow and steady government tenders offer the hope of significant but sustainable levels of end demand.

But what path can help get Europe’s manufacturing back on track? Broadly speaking, those who made money from solar deployment opposed the trade measures and those who made cells or modules backed it. The solar value chain was split down the middle. There remains disappointment amongst manufacturers that the European Commission chose to shelve the MIP just months after China closed the door on state-level support for solar. The shadow of oversupply was already looming, following that surprise announcement, module prices began to slide.

Arnaud Chaperon, is vice president of European public affairs at the Total Group, and previously ran its solar division. It is the majority owner of SunPower and energy storage manufacturer Saft.

“It’s not necessarily the MIP ending that’s the real issue for us. It’s the image that Europe is giving outside at a time where you have Trump protecting his industry in the US, you have India starting to protect and say be careful with the dumping from China and you have Europe fully open,” said Chaperon. “For the industry of the future when we have to compete to develop a battery industry for instance, it’s giving a bad example.” Chaperon also said that a review would have been a good idea off the back of the changes in Chinese policy.

The European manufacturing industry doesn’t quite seem ready to take a conciliatory approach.

Dag Kralj sits on the board at Slovenian manufacturer BISOL. He is especially critical not just of the decision to drop the MIP, but of the compromise deal that led to its creation.

“The rule of law is the fundamental principle at the heart of the European Union,” he says, “so it is a sad day for all EU citizens when European Commission, as the bastion of legality in EU, waters down its own rules – normal procedure being to prolong measures for five years, when a review found that dumping was still occurring.”

BISOL claims to have remained profitable throughout, including what Kralj calls the worst years during 2010-2012. It now plans to increase capacity from 150MW to 250MW. But it is the exception, not the rule. The two largest manufacturers have left the continent (Jabil Circuit, now owned by RECOM but unclear what or if it is producing) and the other, SolarWorld is bankrupt.

If there is a route to prosperity for European producers it is unlikely to come via GW-scale competition of me-too modules in emerging economies. If BISOL represents how a small and nimble firm has negotiated the hard times, the start-up Energyra shows how Europe’s undoubted technical excellence in solar manufacturing can find a market.

Daniël Kuijk is the firm’s co-founder and CCO-CMO. He tells PV Tech that their business plan was based on the assumption that the MIP would expire and that a race to the bottom was never in mind.

“Sooner or later either the quality and safety of the product will suffer or the company’s balance sheet; often both,” he says.

“Energyra’s business strategy is to focus on highest quality by applying next step technology in a fully robotized ‘Industry 4.0’ setting. Not the cheapest per Watt peak, but best in performance and durability and as a result very competitive, if not cheapest, in cost per kWh over the module lifetime,” says Kuijk. The firm’s modules will have a 30-year warranty.

Historically, most of the innovation in the PV sector came from Europe, with the Netherlands being a notable contributor. There will be no Asian PV company nowadays that is not applying any European technology. Also, the back contact (MWT) technology that Energyra is using is an innovation from the Dutch scientific institute ECN.

Kuijk says the firm supports a level-playing field and expects the removal of the duties to make business tougher. He does note that if there is a flood of cheap modules into the market, the catalysing impact that has on demand could create more potential customers for them.

The trade body SolarPower Europe, which lobbied hard against any trade barriers, remains adamant that the best outcome has now been achieved. It is now working on what it calls an “industry strategy for solar”.

“Europe needs an over-arching strategy for the solar power sector. Ninety-five percent of the value chain supported the removal of the trade measures, because they created a negative feeling between panel manufacturers and manufacturers of other products and the downstream. Now they are gone the time is right for us all to work together on an umbrella industrial policy where all segments benefit. SolarPower Europe is working with the European Commission on an industrial policy through the Clean Energy Industrial Forum,” it said in a statement emailed to PV Tech.

The group also points to the targeted support solar has received in terms of infrastructure and finance in other parts of the world, something it would like to replicate in Europe.

“European Investment Bank facilitated loan guarantees to secure low-interest financing should be offered to the industry to help it grow. The Commission should also coordinate national efforts to offer incentives to industry to site its operations in specific locations and therefore create strategic clusters. These incentives can include an advantageous fiscal regime for an initial period after construction of the plant. Where possible, state aid instruments should be considered for specific plants, locations and segments.”

The immediate reason to be cheerful however, remains that foundation of innovation.

“Given the situation, that EU-based PV producers are almost extinct and the few survivors are further obstructed by dishonest competition from China, the outlook for further EU-based innovation is not particularly “sunny”. However, the EU is still the home of most PV innovation, giving the whole industry a unique opportunity to make renewable PV-energy a gamechanger…again.”

Solar jobs in Europe could exceed 1.1m if EC raises renewables target to 45%