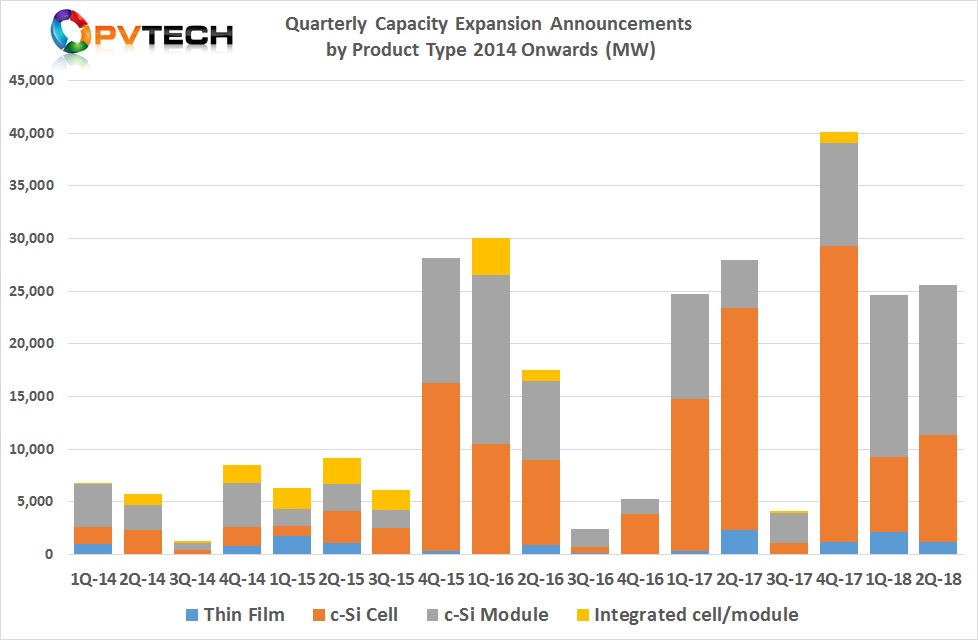 PV manufacturing capacity expansion announcements in the second quarter of 2018, were slightly higher than the previous quarter, although activity slumped specifically in June, after China’s decision to suddenly cap utility-scale and distributed generation (DG) projects (531 New Deal). But large-scale multi-gigawatt production plans in the first half of the year may have hidden an inevitable slowdown, despite the impact on downstream demand from the 531 New Deal.

Recently published in edition 41 of Photovoltaics International is the white paper “PV manufacturing capacity expansion announcements in Q2 2018”, which can be accessed online through a paid annual subscription to the journal here, or individual white paper purchases here.

Below are some of key findings from the Q2 2018 report.

PV manufacturing capacity expansion announcements in the second quarter of 2018, were slightly higher than the previous quarter, although activity slumped specifically in June, post China’s decision to suddenly cap utility-scale and distributed generation (DG) projects (531 New Deal) but large-scale multi-gigawatt production plans in the first half of the year may have hidden an inevitable slowdown, despite the impact on downstream demand from China post the 531 New Deal.

Total combined second quarter 2018 capacity expansion announcements were 25,580MW, up from 24,870MW in the first quarter of 2018, despite the rapid decline in announcements in June. 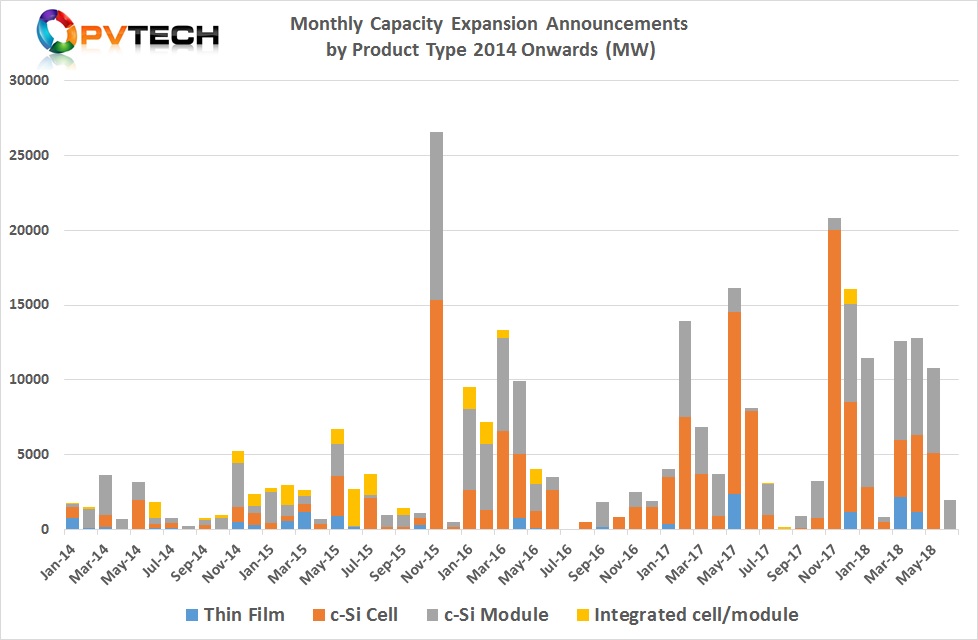 Plans by GCL in India and Egypt significantly boosted totals in the quarter and both announcements remain highly speculative at time of writing. Excluding the 9GW of MOU’s from GCL, total announcements would have been around 16,500MW, considerably down quarter-on-quarter.

The biggest impact from excluding GCL would have related to solar cell expansions, which would have totalled just over 1GW, instead of over 10GW as reported.

Module assembly announcements in the quarter totalled 14,200MW and 5,200MW if GCL was excluded from the analysis. Thin-film was 1,200MW in the quarter, all contributed by First Solar. 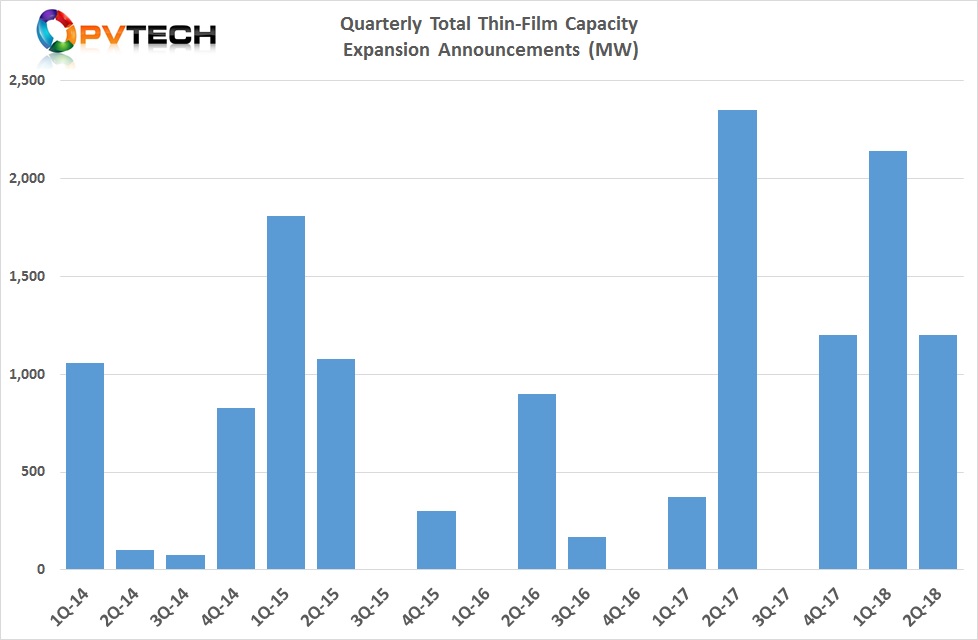 Plans by GCL in India and Egypt also skewed capacity announcements on a geographical basis in the second quarter. The 10GW possible plans (5GW cell and 5GW module assembly) in Egypt meant it was the top location in the quarter.

However, GCL’s potential plans in India were supported by planned expansions by two India-based companies, resulting in a total of 9.5GW announced in the quarter.

Turkey continues to attract potential capacity expansions, having accounted for 3,950MW of announcements in 2017, the second quarter of 2018 accounted for 2,580MW, highlighting both the local content rules and growth in PV deployments in the country that continues to attract potential capital investments in manufacturing from both Turkish and overseas.

Also of note in the quarter was the impact of new import duties imposed on most of the rest of the world in the US. Led by First Solar and LG Electronics and adjustments by CSUN, the US attracted a total of 1,900MW of new capacity expansion announcements in the second quarter, up from 1,600MW in the previous quarter. 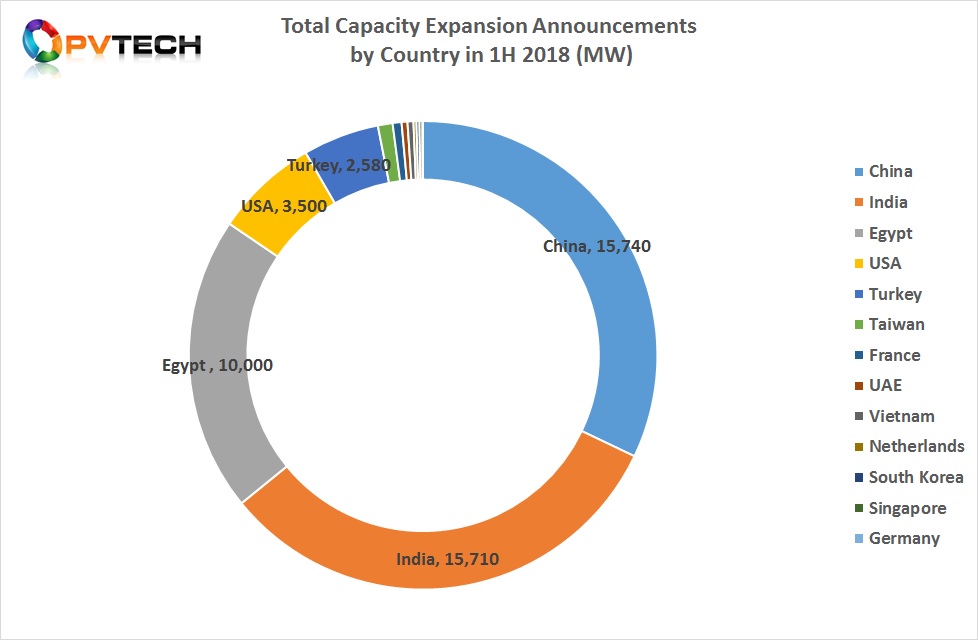 In the first half of 2018 a total of just over 50.4GW of combined (cell, module, thin film) capacity expansions were announced, down from over 52.7GW in the prior year period, indicating very little change.

Thin-film planned expansions remained strong with announcements totalling over 3.3GW in the first half of 2018, compared to a total of over 3.9GW in all of 2017.

Solar cell announcements in the first half of 2018, topped 17.3GW, compared to over 30GW in the prior year period. This figure drops to around 8.3GW if GCL plans in India and Egypt are excluded.

A total close to 30GW of new module assembly capacity expansion announcements were made in the first half of 2018. This compares to nearly 14.6GW in the prior year period. 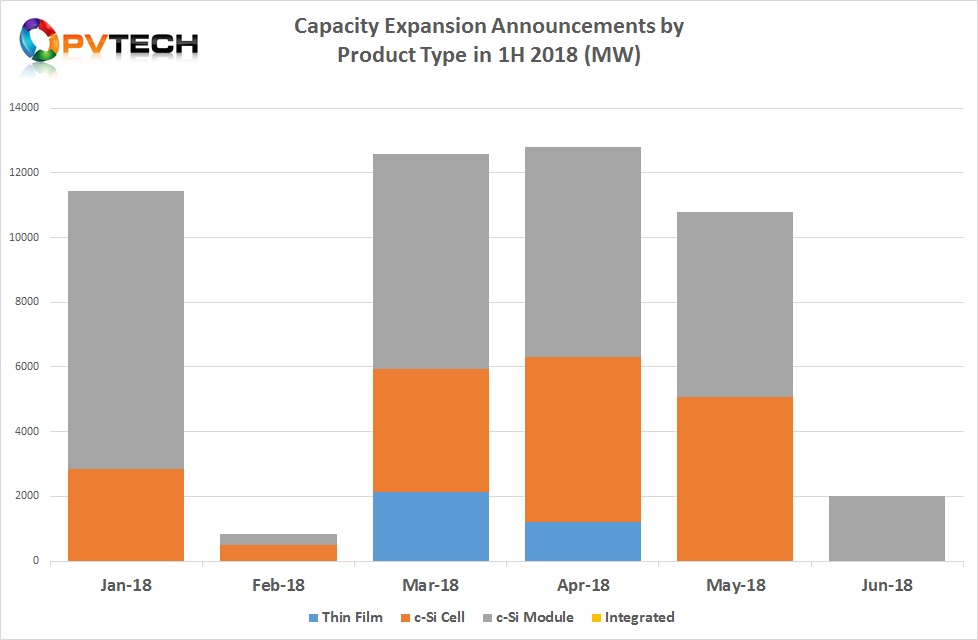 However, the key difference was the significant level of new investments in high-efficiency PERC and next-generation cell technologies, compared to conventional module assembly expansions. Much of the existing module assembly capacity could be upgraded to meet the cell technology migration (half-cut, PERC, Multi-Busbar etc…).

When analysing expansion plans on a geographical basis in the first half of 2018, it would seem that its business as usual when total combined announcements for China topped 15.74GW. However, only 1.5GW was announced in the second quarter, all from JA Solar.

The impact from China’s 531 New Deal did have an instant negative impact on new capacity expansion announcements in the month of June.
The high-level of activity in 2017, coupled to similar levels in the first half of 2018, which are dominated by multi-gigawatt multi-phase, multi-year expansions (wafer, cell and module), could limit the level of overcapacity intensity, resulting in a large number of planned phased expansions being put on hold both in China and India, in particular.

The second half of 2018 is expected to reveal the scale of the disruption to capacity expansion plans caused by China’s 531 New Deal.

However, low utilisation rates, notably of multicrystalline-based technologies (wafer and cell) could lead to manufacturing plant closures in many regions, not just in China and South East Asia, while higher utilisation rates for monocrystalline technologies could result in existing expansion plans continuing with limited delays, due to the general industry shift to mono and higher efficiency products.