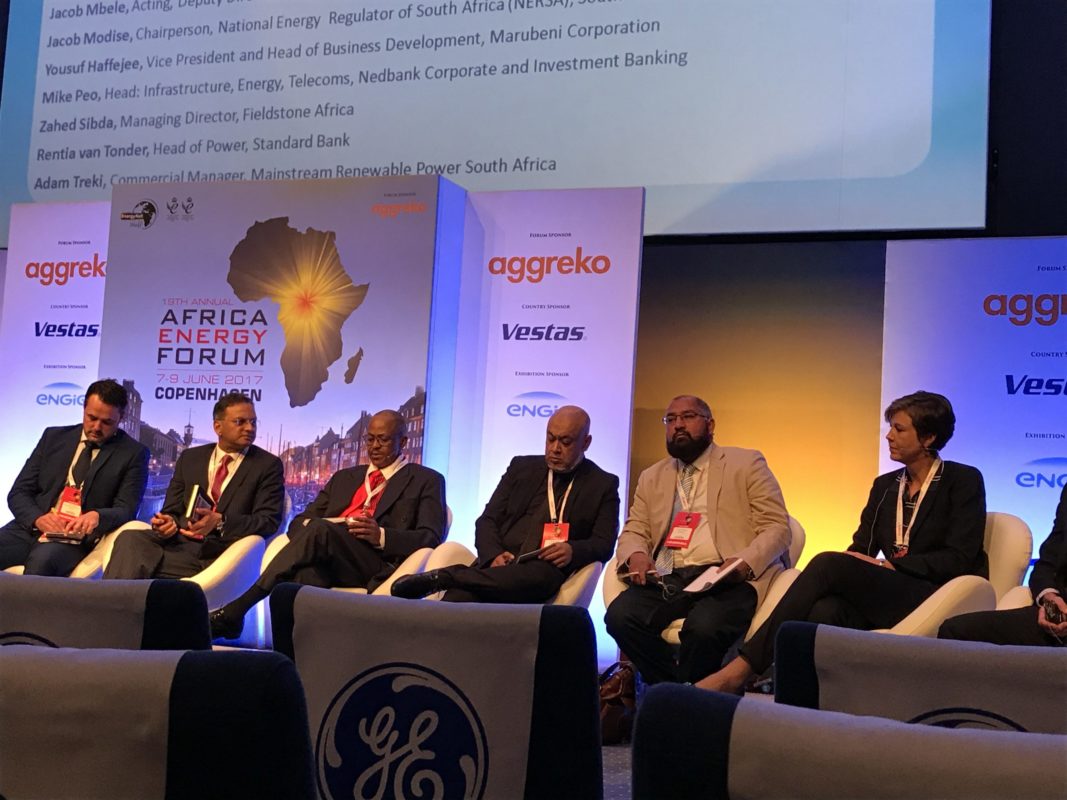 Breaking up Eskom’s monopoly in South Africa’s power market is not the answer to signing the outstanding PPAs under the country’s renewable energy procurement programme, a representative from the Department of Energy (DOE) has said.

At the annual Africa Energy Forum 2017, Jacob Mbele, acting deputy director general of Energy Programmes and Projects, addressed the issue of the country’s monopoly utility refusing to sign the 37 outstanding renewable energy PPAs won under the round 4.5 of the Renewable Energy Independent Power Producer Procurement Programme (REIPPPP), maintaining that Eskom is not the problem, but the issue is ultimately one of supply and demand.

It was suggested during the panel discussion that the country’s power market may be in need of restructuring; given the utility had failed to respond to litigation threats from the country’s renewable energy council (SAREC), a call to action by president Jacob Zuma, and an April deadline imposed by former energy minister Tina Joemat-Pettersson.

Eskom is the only state-owned electricity administrator in the country, and also controls around 80% of the power supply on the continent.

“Splitting up Eskom’s monopoly is not going to address the fact that you buy power according to supply and demand, said Mbele. “Splitting up Eskom will not take away that demand. It operates the way it does because of historical reasons. A lot of developers are looking into other options – such as selling directly to customers, principalities etc. But at the end of the day we are chasing the same demand. The more you steal away the demand, the less demand is on the Eskom side. So we need to find a resolution. I believe that splitting up Eskom is not dealing with the problem because the problem is over supply.”

Eskom told PV Tech back in August last year that the delay at that time on signing the 37 remaining PPAs was because of overcapacity fears. The programme so far has supplied an additional 1,084MW to South Africa’s grid through almost 100 renewable energy projects. However, Eskom may have reached its limit for new clean energy capacity.

“We need to understand the drivers behind procurement for new generation,” said Mbele. “From a generation point of view, demand hasn’t been a driver since 2011. The reality is that we are in a different space now.”

South Africa’s deputy minister of energy Thembisile Majola said that despite the standstill, the country will not abandon the programme.

“The IPP programme will continue to be a part of the energy delivery model and it is integrated in the government’s central plan. The IPP programme is one that other countries want to learn from our experience and also ensure that they don’t make the same mistakes we did as we were pioneering in this regard, but we believe that there are things that can be improved.”

When the programme first launched, it was hailed as a huge success; with its ability to raise capital at a reasonable rate. This rate has also come down over the various bidding rounds. However, according to Kamran Khan, CEO of global infrastructure investment firm Emerging Infrastructure Partners, the issues with REIPPPP are inevitable – regardless of Eskom’s input – due to South Africa being in a transitional period:

“Is it down to Eskom to fix the sector? Is Eskom the reason why the sector is not fixed?” he asked. “The challenges with the procurement programme; […] the challenges from the inside are significant as country transitions; job loss, investor concerns, challenges how to expand it and think of right energy mix… Investors are looking for more certainty on procurement and more clarity from government.”

“Everyone was very excited about the REIPPP programme [because] the way the PPA was set up there wasn't an explicit government guarantee, but everyone knew very well the government stood behind Eskom,” Wildu du Plessis, Head of Africa for Baker McKenzie’s Johannesburg office, told PV Tech.

“I think sadly the resolution is dependent on a sorting out of the political issues on South Africa at the moment. With the level of political uncertainty that you have, I think it is very difficult to see how these PPAs will be unlocked. The thing that is positive about that is that if come the end of the year when the ANC has got its annual meeting, if the PPAs get unlocked there, it will be relatively quick to get things going again.”

“The standstill definitely has a large effect just in the sense that it creates uncertainty; you can deal with anything as long as you've got certainty. So the issue is the uncertainty around it which of course has knock on effects; it does make it difficult if you're not sure how your state-owned utility is going to participate.”