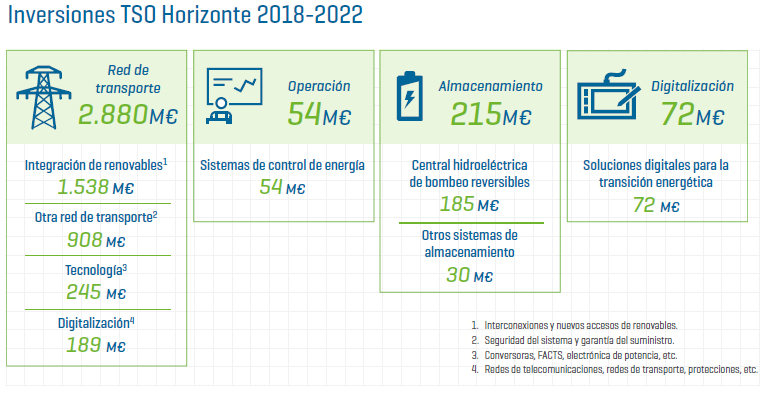 The agency said on Thursday it will deploy over €3.2 billion between 2018 and 2022 to expand Spain’s high-voltage transmission network, in a bid to prepare for national clean energy targets of 32% by 2030.

A great chunk of the total (€1.5 billion) will be earmarked for the integration of renewable capacity through new interconnections and access points, REE explained. This will come alongside €908 million for system reliability and security of supply, €434 million for digitalisation and technological upgrades and €54 million for power control systems.

Energy storage will also reap a slice of the funding boost. REE’s 2018-2022 investment plan foresees €185 million support for pumped hydroelectric solutions, with a separate €30 million reserved for other storage technologies.

The multi-billion grid commitments emerge as the Spanish system braces for a colossal uptake of renewables. In draft plans that must be confirmed by the winner of the general 28 April election, the government is targeting a fully renewable power system by 2050; under the roadmap, PV and energy storage capacity should reach a respective 37GW and 6GW by 2030.

The grid push may help ease the congestion fears of some of the investors drawn to Spain’s subsidy-free PV potential. At a recent Solar Media event, some went as far as to warn the system would “collapse” if all the capacity under planning was linked to the grid in its current state.

In parallel to its 2018-2022 commitments, REE is also laying the groundwork of grid upgrades between 2021 and 2026. Until late May, the operator will accept proposals from regional and municipal authorities and energy developers on how the network should be managed over the six-year period.